Below, AzVision.az presents some historical-cultural monuments of Azerbaijan destroyed by Armenia. 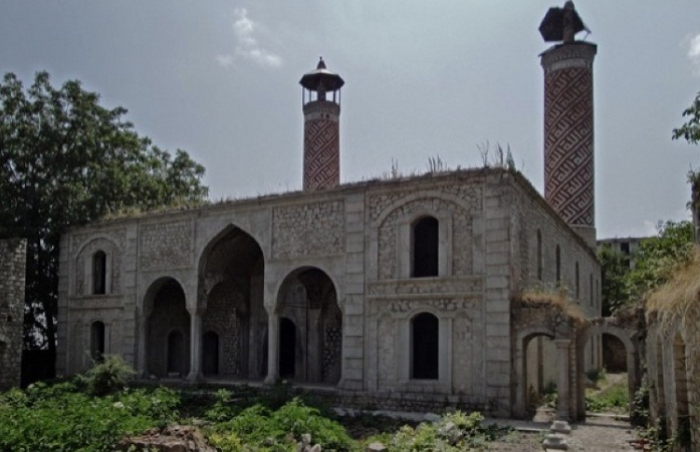 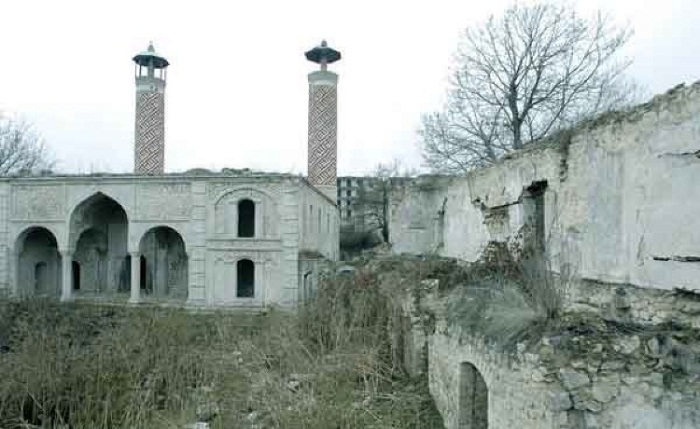 The last ruler of Karabakh khanate Ibrahim khan’s daughter Govharagha (real name Govharnisa) was the famous philanthropist of that time.

The mosque was included in “The list of the immovable historical and cultural monuments of state significance” by resolution of the Cabinet of Ministers of the Republic of Azerbaijan No.132, dated August 2, 2001. During the occupation of Shusha in May, 1992, the building and minarets of Ashaghi Govhar Agha Mosque were severely damaged by being exposed to fires of the armoured vehicles. 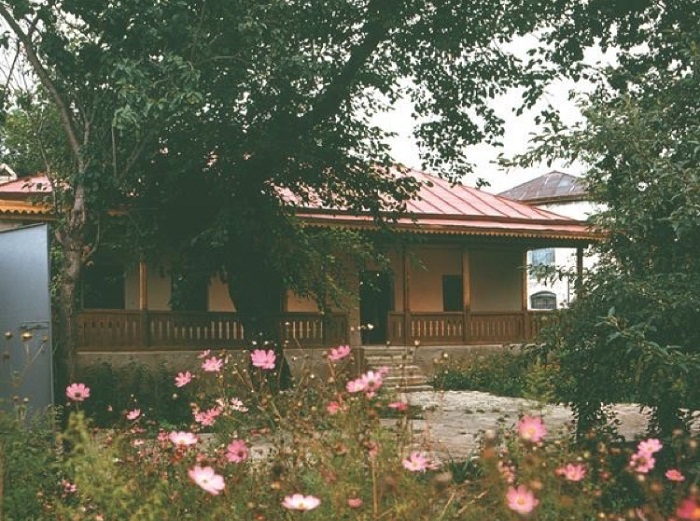 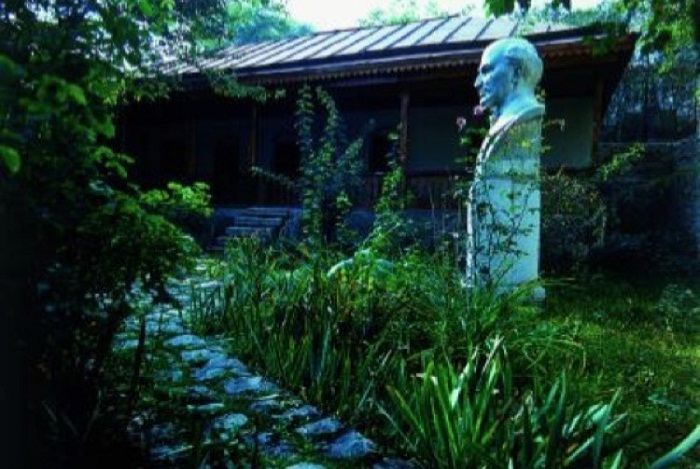 People’s Artist of the USSR Bulbul’s House-Museum in Shusha existed until 1992, was a branch of the Baku memorial museum. The house-museum consisted of a courtyard, two rooms and a veranda.

Very rare and valuable documents on Bulbul’s creative work, research, pedagogic and public activities were demonstrated there. On the façade of the museum there is a memorial plaque bearing a bronze portrait of Bulbul’s childhood made by the sculptor Khanlar Ahmadov.

As a result of the occupation of Shusha by the Armenian Armed Forces more than 6 thousand museum pieces were destroyed and the transportable ones were carried to Armenia. At present Bulbuls’ monument shot by the Armenian aggressors is placed in the courtyard of the National Art Museum of Azerbaijan. 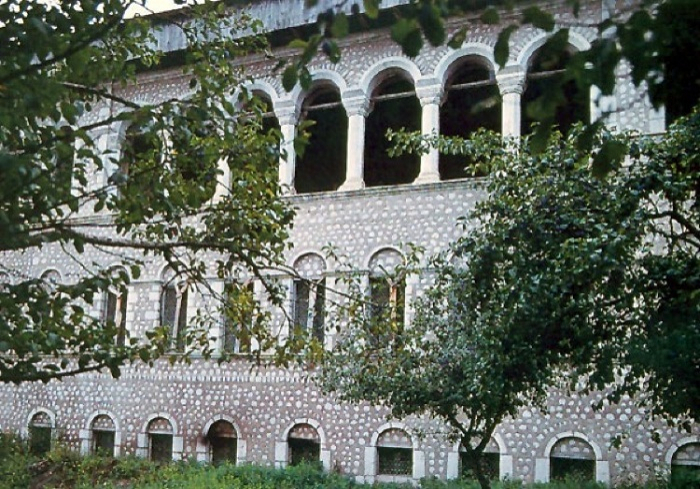 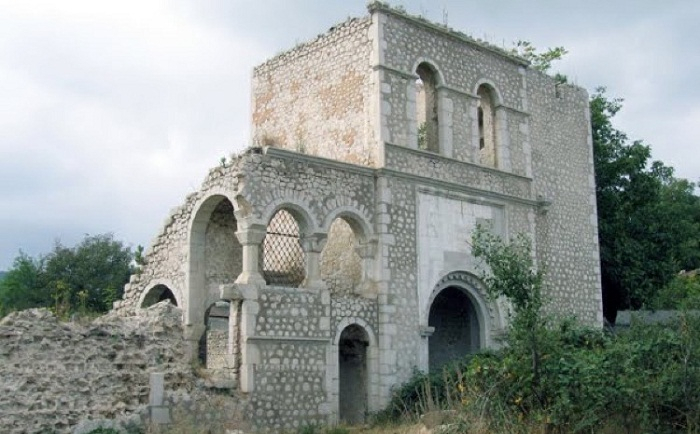 Haji Gulu’s estate in Khoja Marjanli area was built in 1851. There were 46 rooms and 2 large halls in the three-storey palace built in the national style. One of those halls is supposed to be described in the picture of the Russian artist V. V. Vereshchagin who travelled to Shusha in 1865.

During the occupation of Shusha by Armenians in 1992, Haji Gulus’ property was demolished by the artillery fire. 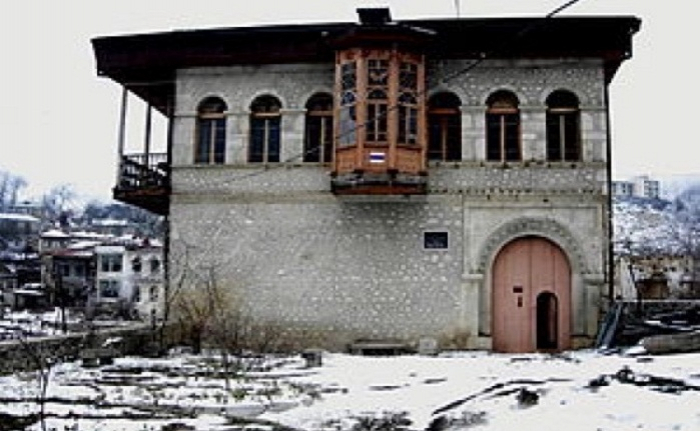 History museum of the city of Shusha was of History and Ethnography Museum type. The museum contains rare photographs depicting the history of Shusha, documents related to the 19th-20th centuries, the projects, models and photographs of the residential buildings of historical importance constructed in the 18th-19th centuries. There were also interesting stands and exhibits about the well-known Azerbaijani intellectuals, educators, singers, musicians, and writers born and raised in Shusha.

Decorative and applied art section contained valuable art objects, jugs, pot sets, pottery, carpet and rugs woven in Shusha and surrounding villages, decorative knitting patterns. The museum was open until the occupation of the city of Shusha by the invader Armenian army in May, 1992. It was impossible to salvage a significant part of the exhibits. 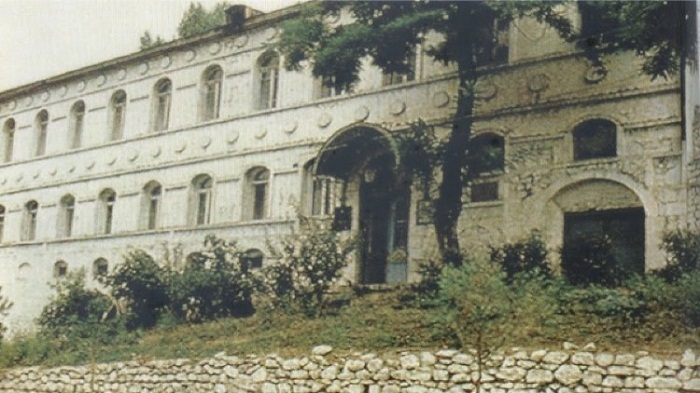 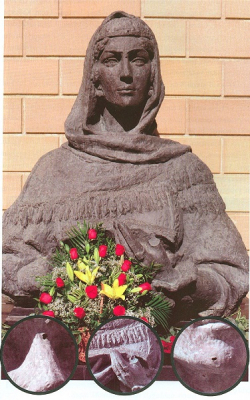 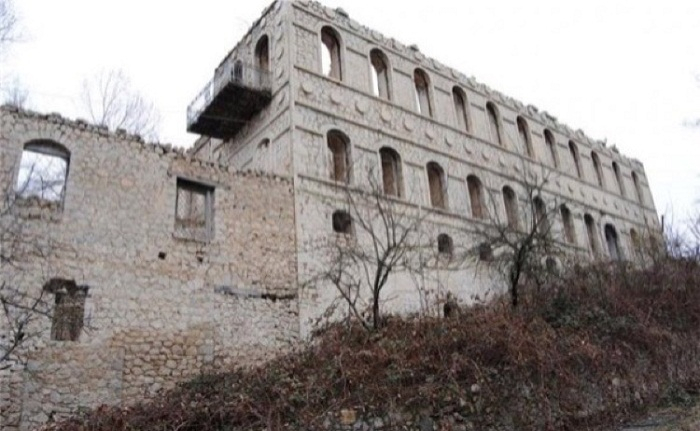 A two-storey house belonging to the prominent Azerbaijani poetess Khurshudbanu Natavan was considered one of the historical residential buildings of the 18-19th centuries. At present this house is in a dilapidated condition. 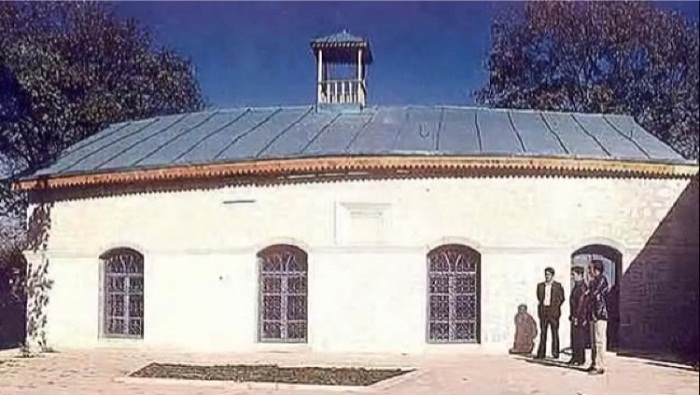 The architect of the same name mosque built in the 19th century in Mamayi area of Shusha was Karbalayi Safikhan Garabaghi. There was a “guldeste” (tent-shaped booth for muezzin) on the house roof of Mamayi mosque which resembled the other quadrangular house roofs of the residential buildings in Shusha.

Mamayi mosque functioned as a poetry house during years of soviet power. The mosque has two storeys. 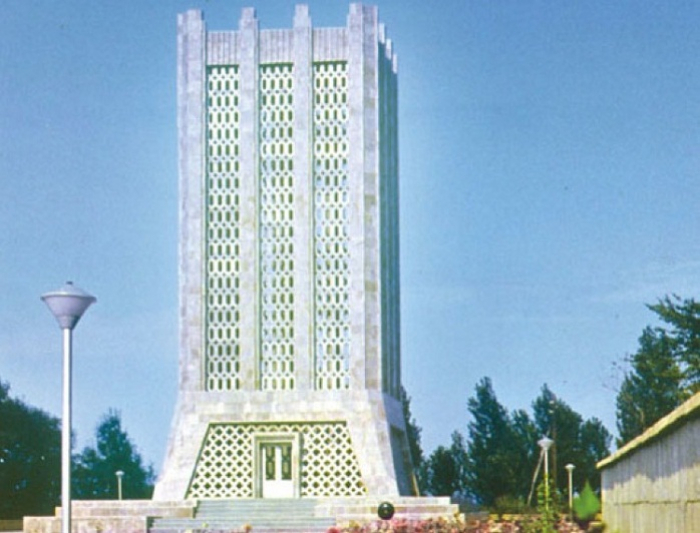 The construction of the Museum Mausoleum Complex of outstanding Azerbaijani poet Molla Panah Vagif was launched in 1977, on the basis of the architect A. V. Salamzade and E. I. Kanukov’s project.

The complex was inaugurated in January, 1982. The complex was built on the tomb of the great poet located in the area close to the famous Jidir Duzu (horse race field) - the prominent place of Shusha. About eighty museum pieces reflecting the period of M. P. Vagif’s life in Shusha were exhibited there.

The first secretary of the Central Committee of Azerbaijan Communist Party Heydar Aliyev, as well as, well-known literary and cultural figures took part in the opening of the complex. 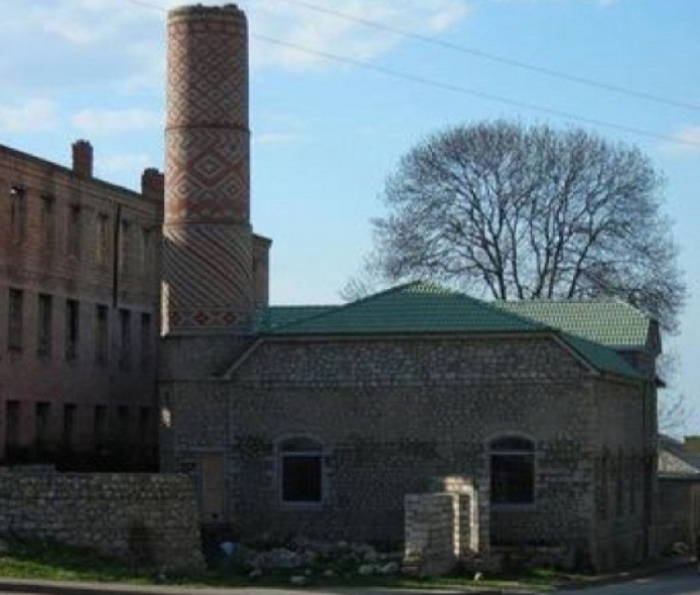 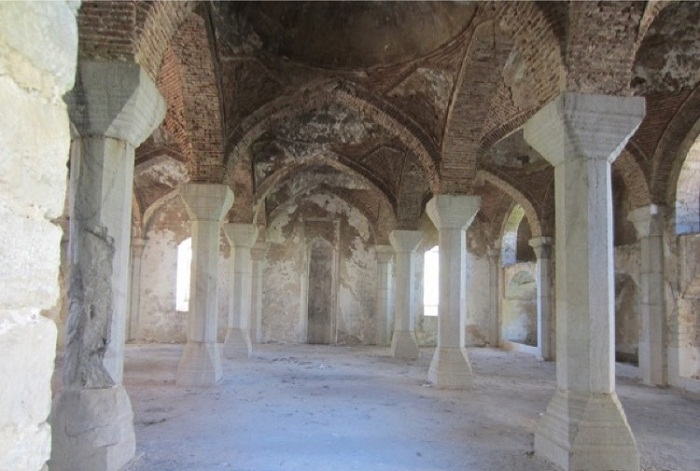 Saatli Mosque was built in 1883, by the prominent Azerbaijani architect Karbalayi Safikhan Garabaghi at the place of the mosque and madrasah built by Panah Ali khan in 1759. The Mosque was named Saatli after the area it was built.

The general structure of the Mosque’s minarets resembles the minarets of Yukhari Govharagha and Agdam Juma Mosques. Saatli Mosque is considered one of the final masterpieces of Karbalayi Safikhan Garabaghi, built with two minarets. The Mosque has a prayer hall and brick minarets with specially patterned decoration specific to the architecture of Karabakh.

During the occupation of Shusha by the Armenian Armed Forces in May, the minaret of the mosque was demolished by the artillery fire. 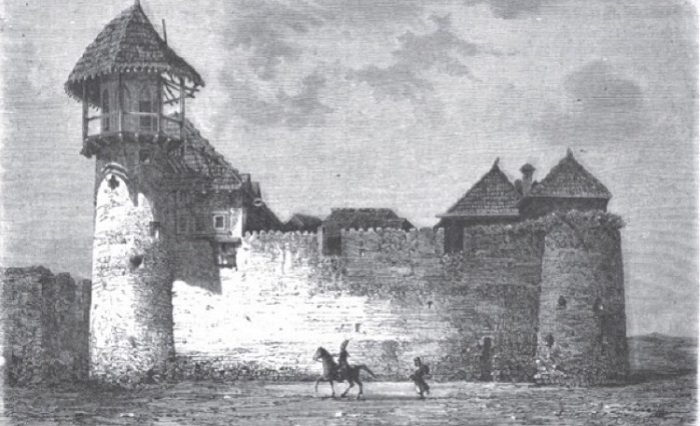 Shusha Castle implies the castle walls embracing the Shusha city of Azerbaijan. The Castle defended the city against the foreign invasions, and over a long period of time had been a symbol of impregnability. Though the Castle had been besieged for a long time during Agha Mahammad Shah Gajar’s attack to the South Caucasus, it could not be seized.

There is no accurate information about the foundation of Shusha Castle.

The castle has a strategically favourable location. Thus Shusha Castle is located in the mountainous area. The Shusha plateau is 1600 meters the highest and approx. 1300 meters the lowest above the sea level. This area is covered by deep brooks flowing into the Dashalti and Halfali rivers’ beds.

Taking into account the unfavourable geographical position of Bayat and Shahbulag castles, Panahali Khan, the Khan of Karabagh, enacted a decree on reconstruction of Shusha castle in 1753, and the centre of the Karabagh khanate was transferred to Shusha castle. After reconstruction the castle was for a long time named Panahabad in the sources.

Shusha Castle is one of the most beautiful pieces of the Azerbaijani architecture. The castle is constructed in Arran style of architecture. Mainly the local stone, lime and yolk mixture were used in construction of the castle. The castle has three doors. Ganja door is distinguished by its architectural features. The castle has a circular guard towers. At close quarters of the castle there is a bridge of fine architectural qualities connecting the castle with outside world. The bridge is known as Gala Bridge (“Gala” means castle). In the reign of Panahali Khan, four castle gates were built in order to connect Shusha with the outside world. The names of three gates - Ganja, Aghoghlan and Irevan gates have survived to our time.

It was impossible to find neither name nor the location of the fourth gate. That gate is supposed to be removed during reconstruction of the castle walls by Ibrahimkhalil Khan. 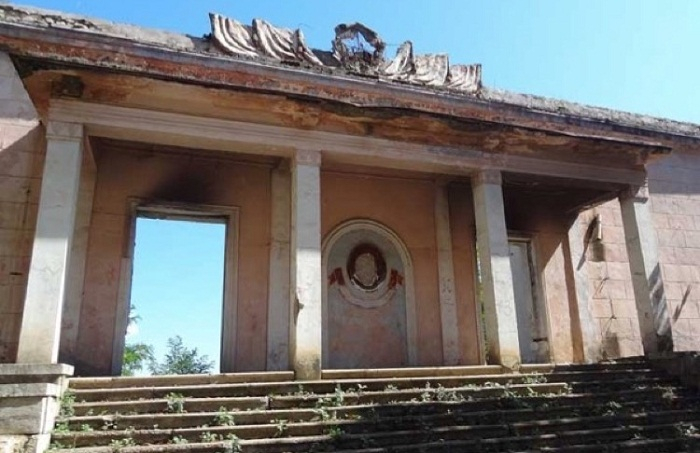 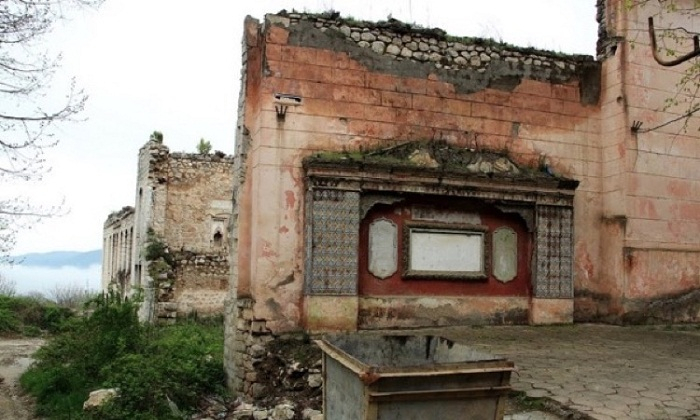 Shusha Music School established on October 10, 1932, was located at the house of the prominent Azerbaijani poetess Khan gizi Natavan. It was the first music school for children in Azerbaijan. The initiative in opening of the music school in Shusha belongs to the outstanding Azerbaijani singer Bulbul born in Shusha.

After the occupation of Shusha by the Armenian Armed Forces, Shusha Music School was torn down. 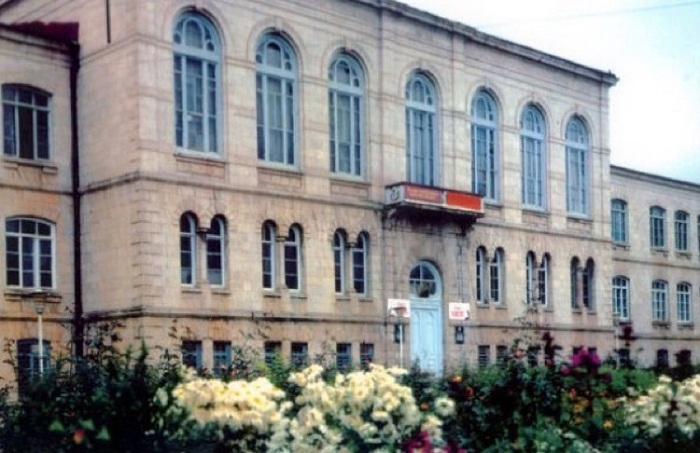 The first secondary school in Shusha – 6-grade Realni School was founded in September 20, 1881. The first time 159 pupils were enrolled in school consisted of preparation and three main classes.

Shusha Realni School was considered an exemplary educational institution at that time. Despite the religious prohibitions in that school, special attention was paid to the learning and teaching of foreign languages and literature.

Famous Azerbaijani writers Abdurrahim bey Hagverdiyev and Yusif Vezir Chamanzaminli were graduates of that school. In May, 1992, after the occupation of Shusha, the Armenian vandals burned and utterly ruined the Shusha Realni School. 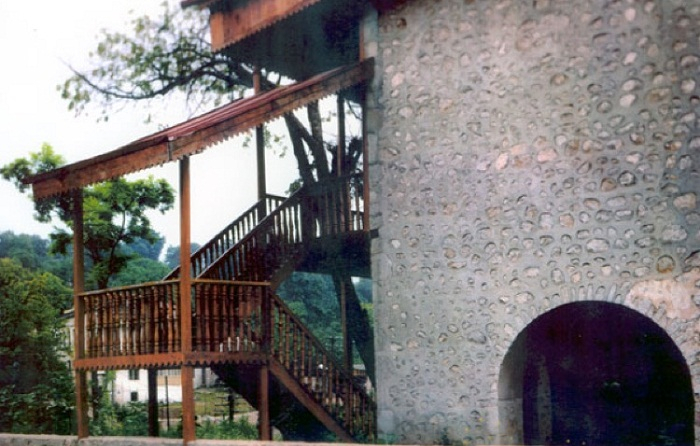 An outstanding Azerbaijani composer Uzeyir Hajibeyov’s House-Museum in Shusha was founded in 1959. The House-Museum continued its activity until the occupation of Shusha by the Armenian invaders in 1992. Along with household items of Hajibeyov`s family, the personal belongings, photographs, books of Uzeyir bey, as well as the books dedicated to him and presented to the museum were on exhibition.

On May 8, 1992, after the occupation of Shusha by the Armenian invaders the museum discontinued its function. Due to the great efforts of museum’s leadership, the museum pieces were kept safely and brought to Baku. At present they are kept in Uzeyir Hajibeyov’s House-Museum in Baku. 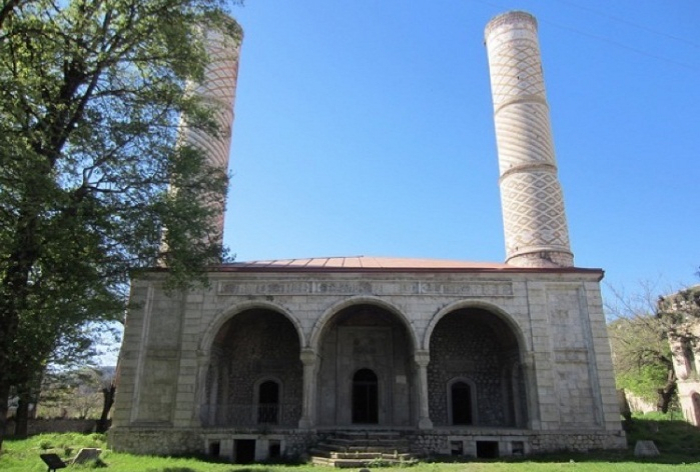 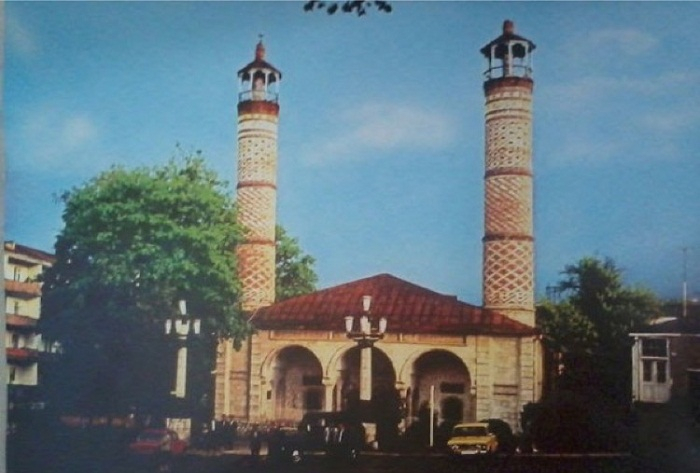 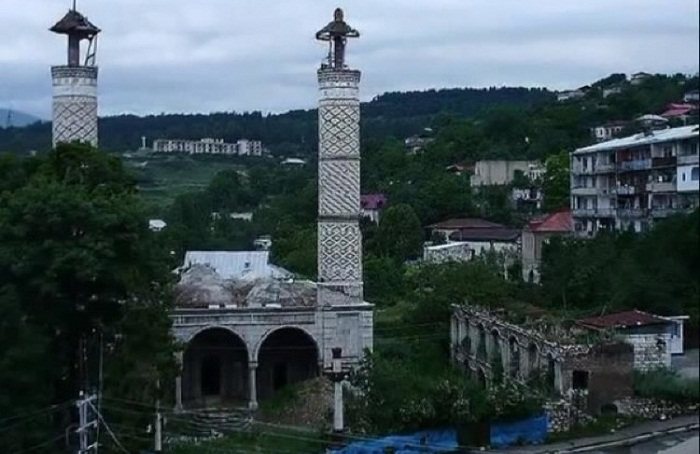 Yukari Govhar Agha Mosque was built by the architect Karbalaei Safikhani Gharabaghi at the expense of Govhar agha in the years 1883-1884, nearly eight years after Ashaghi Govhar Agha Mosque. The three-beam veranda in the northern section of the mosque gives it a rectangular form (21.30 х 26.20 meters). The mosque has two minarets.

The balconies used to host women’s premises of the prayer hall. The same construction pattern can be viewed in Agdam Juma Mosque and Lower Govhar Agha Mosque. As in the previous Mosques, the minaret platform of the Upper Govhar Agha Mosque was built of natural limestone; but geometrical ornaments are not the same with that of the Lower Govhar Agha Mosque minarets. They rather resemble the geometrical ornaments of Agdam Juma Mosque’s minarets. Garret cover of the minarets had been assembled from the wooden material. A half-moon shaped figure illustrates the array’s last tip.

Yukhari Govharagha Mosque being in operation as a history museum since 1969, was demolished in May, 1992, after occupation of Shusha by the Armenian vandals.

Click here to read the article on the historical monuments in Jabrayil region.