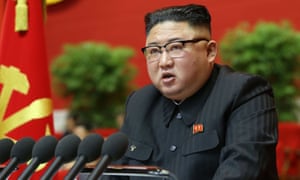 North Korea's leader Kim Jong-un has admitted his five-year economic plan for the isolated country failed to meet its targets in "almost every sector".

He was speaking at the opening of a rare congress of his ruling Workers' Party - only the eighth in its history.

North Korea closed its borders last January to prevent the spread of Covid-19, despite claiming to have no cases of the virus.
That has left it cut off from its neighbour and ally, China.

Trade between the two has plummeted by about 80%. Typhoons and floods have devastated homes and crops in North Korea, which remains under strict international sanctions, including over its nuclear programme.

TV footage showed a conference hall in the capital, Pyongyang, filled with thousands of party delegates, none of them wearing masks, rising to their feet to applaud as Mr Kim arrived.

In his speech, Mr Kim said the five-year strategy he announced in 2016 had "immensely underachieved in almost all sectors" and mistakes had to be "boldly admitted".

He called for greater self-reliance and praised party workers for combating the threat of the coronavirus. North Korea has reported thousands of suspected infections to the World Health Organization (WHO), although it has not admitted to having any confirmed cases.

Mr Kim is expected to use the congress to announce a new five-year economic plan.
His speech comes just two weeks before US President-elect Joe Biden takes office, replacing Donald Trump, with whom Mr Kim enjoyed a warm rapport, even if little concrete progress was made on negotiations over North Korea's nuclear programme.