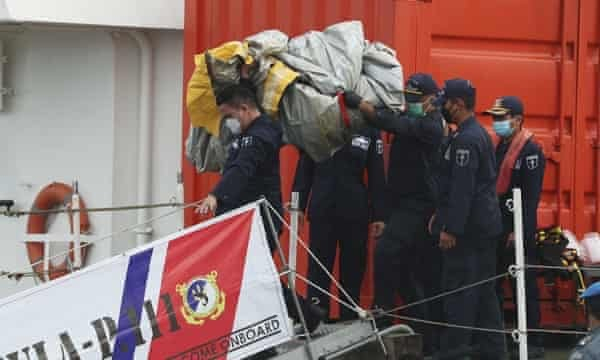 Indonesian rescuers have pulled body parts, clothing and scraps of metal from the Java Sea on Sunday morning, a day after a Boeing 737-500 with 62 people onboard crashed shortly after takeoff from Jakarta, officials said, The Guardian reported.

Officials were hopeful they were homing in on the wreckage of Sriwijaya Air Flight 182 after sonar equipment detected a signal from the aircraft.

“These pieces were found by the SAR [search and rescue] team between Lancang Island and Laki Island,” said Bagus Puruhito from the National Search and Rescue agency in a statement.

Indonesia’s Air Chief Marshal, Hadi Tjahjanto, said teams on the Rigel navy ship equipped with a remote-operated vehicle had detected a signal from the aircraft, which fitted the coordinates from the last contact made by the pilots before the plane went missing.

“We have immediately deployed our divers from navy’s elite unit to determine the finding to evacuate the victims,” Tjahjanto said.

More than 12 hours after the Boeing plane operated by the Indonesian airline lost contact, little is known about what caused the crash.

Fishermen in the area around Thousand Islands, a chain of islands north of Jakarta’s coast, reported hearing an explosion around 2.30pm on Saturday.

“We heard something explode, we thought it was a bomb or a tsunami since after that we saw the big splash from the water,” fisherman Solihin, who goes by one name, told the Associated Press by phone.