Azerbaijani president chairs Cabinet of Ministers meeting on H1 of 2015 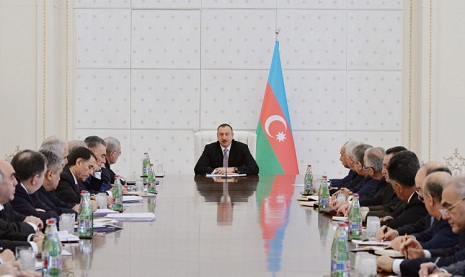 President of Azerbaijan Ilham Aliyev has chaired the meeting of the Cabinet of Ministers on the results of the country’s socio-economic development in the first half of 2015 and the objectives for the future.

The head of state made an opening speech at the meeting.

Following this, the country’s Finance Minister Samir Sharifov, Minister of Communications and High Technologies Ali Abbasov, Minister of Labor and Social Protection of Population Salim Muslumov made reports on the first six months of 2015.

President Ilham Aliyev then made a closing speech at the meeting of the Cabinet of Ministers.