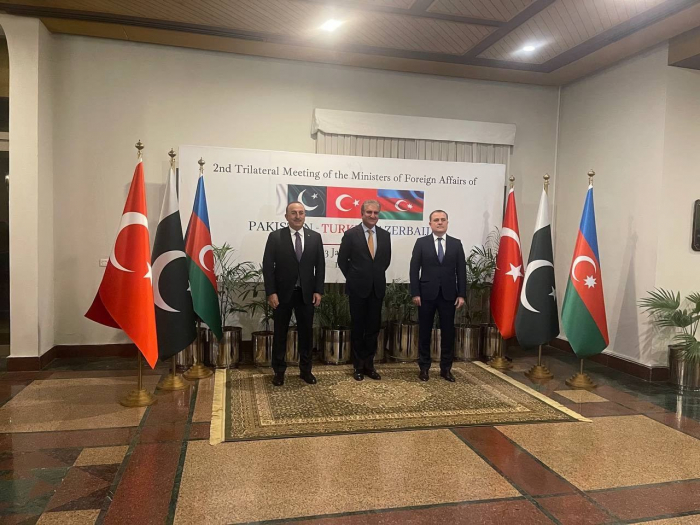 With shared culture, traditions, history, and religion, three brothers – the foreign ministers of Pakistan, Turkey, and Azerbaijan, concluded the 2nd trilateral meeting on 13 January 2021 in Islamabad, the beautiful capital of Pakistan.

In continuation to the first Trilateral Meeting held in Baku on 30 November 2017, desirous of deepening further cooperation built on outcome of in all areas of common interest, comprising political, strategic, trade, economic, peace and security, science and technology and cultural arenas;  has further deliberated to strengthen all-dimensions collaborations.

Highlighting the existing amicable ties among the three countries, based on fraternity, historical and cultural ties, mutual respect, and trust;

Aware of the substantial contributions made by Pakistan, Turkey, and Azerbaijan for the promotion of peace, stability, and development in their corresponding regions and the shared aspiration of their peoples to further progress these ideals for common prosperity and security in the broader region;

Conscious of the innumerable challenges and evolving threats confronting their countries, including but not restricted to intimidations of foreign-sponsored acts of terrorism, cyber-attacks, hybrid forms of warfare, directed disinformation campaigns, and increasing trends of Islamophobia disturbing the peaceful co-existence of Muslim communities in many countries;

Stating severe concerns on the serious human rights violations and criminalities against humankind committed against the Muslim communities in various parts of the world;

Totally aware of the far-reaching consequences of the COVID 19 pandemic as well as the vulnerability of the respective regions to adversative impacts of climate change;

Communicating solidarity with the government and people of Azerbaijan in their struggles to rebuild and rehabilitate liberated territories;

And endorsing commitment towards developing regional consent for peace and development;

Reiterated their unequivocal and robust support for protection and defending the independence, national integrity, and inviolability of international borders of their corresponding States;

Approved to boost joint efforts on combating Islamophobia, discrimination, and persecution of Muslim minorities, in particular at the regional and international fora;

Acknowledged the impact of the Heart of Asia-Istanbul Process in peace, stability, and economic prosperity in Afghanistan and the region, and valued the efforts of the Government of Pakistan in helping a political solution to the disputes in the region, conveyed their backing to Afghan-led, Afghan-owned peace process;

Reintroduced their determination to strengthen cooperation in peace and security in line with innumerable international and regional instruments to struggle all forms and appearances of terrorism, transnational organized crime, smuggling of drugs, narcotics, trafficking in persons, money laundering, criminalities against cultural and historical legacy and cybercrimes;

Committed to backing a just, justifiable and realistic, and conjointly acceptable settlement of the Cyprus dispute, as well as the conflicts in the Aegean and the Eastern Mediterranean based on international law;

Echoed their backing for putting an end to the Armenia-Azerbaijan dispute and stabilization of normal relations based on independence and territorial integrity and internationally accepted borders of Azerbaijan under the applicable U.N. Security Council resolutions;

Committed to encouraging cooperation in defense and security fields, including through sharing best practices, capacity building, new and evolving technologies, and consistent exchange of visits;

Deliberated the far-reaching implications for economic progress and public health due to COVID 19 pandemic, decided to exchange information, research, expertise, and best practices and called for greater international cooperation and solidarity to meritoriously and comprehensibly addressing the challenge, keeping in view financial and capacity restrictions of developing countries;

Decided to strengthen and deepen cooperation for augmenting trilateral trade & investment and stimulated the applicable ministries of the three countries to develop a robust Action Plan with tangible recommendations regarding simplification of duties, tariff, and non-tariff barriers, logistics costs, better synchronization among the banking sectors, and safety of mutual investments, for deliberation and approval by the leadership;

Emphasized the need to increase cooperation for food and energy security, environment, viable development, and climate change and called for more international collaboration for appropriate response and achievement of the 2030 Sustainable Development Goals.

Under the rapidly changing geopolitical situation in the region, it is vital to collaborate in the region and strengthen the regional alliances. All these three countries are peac-loving and responsible nations. Therefore there is no threat to any other country or block from them. This alliance is not against any other country, but only to promote peace, stability, and development of the whole region. Unitedly, we may serve humanity in a much better manner.