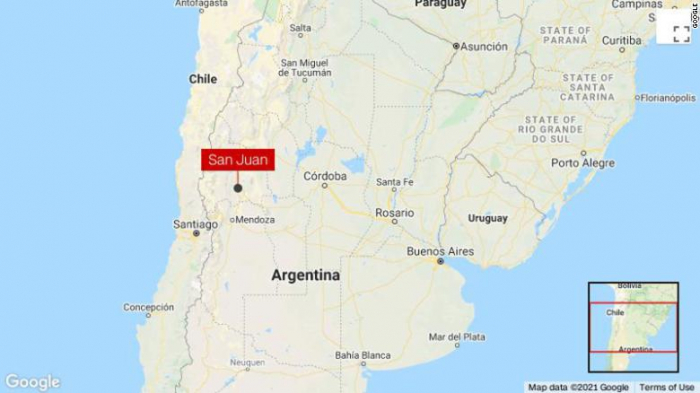 A magnitude 6.4 earthquake has struck Argentina's west-central province of San Juan on Monday night, according to a preliminary report from the United States Geological Survey, CNN reports.

A series of aftershocks around the country followed. A magnitude 5.0 aftershock struck 27 kilometers (about 16.8 miles) south-southwest of Nueve de Julio, around 1,000 km (620 miles) east of the first quake and almost 20 minutes later.

Then, a magnitude 4.9 quake came in the same area as the first, followed by a magnitude 5.3 aftershock

The 4.9, 5.0 and 5.3-magnitude quakes are considered aftershocks as they are smaller in magnitude than the main quake and in the same area.

No injuries have been reported so far, according to San Juan Governor Sergio Uñac. Based on available data, there is no tsunami threat at this time, according to the Pacific Tsunami Warning Center (PTWC).

Speaking at a press conference early Tuesday, Uñac said local authorities are still analyzing the damage, which impacted streets and highways in the province. Some locations experienced power cuts, and homes experienced damage in the town of Caucete. Four people had to be evacuated from their homes in the town of Zonda, in San Juan.

The governor added that the electricity service is now gradually being reestablished. No public buildings have been damaged; some hospitals reported broken glass, but experienced no major structural damage.

Uñac urged people to stay calm after the quakes hit. "Let's put into practice all the measures that we have learned to prevent incidents, while we are committed to knowing the impact of the (earthquake) to collaborate in everything necessary," he tweeted.

He added that the province was working with civil and security forces to respond, as well as with municipalities to respond to "take care of them."

In its preliminary statement, the PTWC recorded the depth of the quake at about 20 kilometers (12.43 miles).