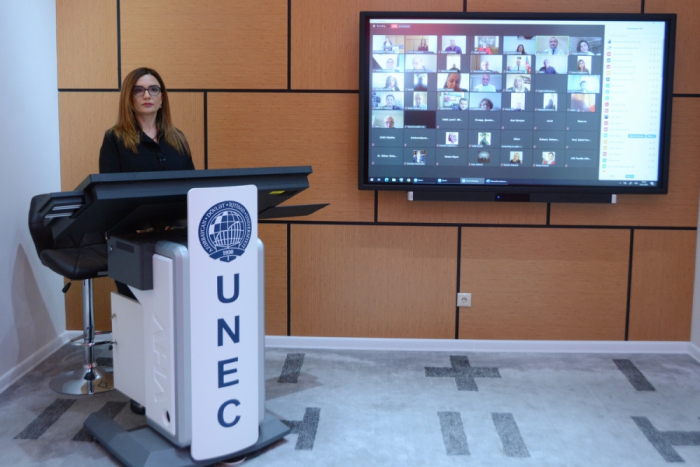 Organized by Center for Multiculturalism and the department for Coordination and Organization of Research Centers of Azerbaijan State University of Economics (UNEC), an international conference on "Azerbaijan's Albanian Christian heritage – Khudavang monastery" has been held.

At the conference moderated by Rana Huseynova, head of Coordination and Organization of UNEC Research Centers, rector of Azerbaijan Institute of Theology Agil Shirinov drew attention to the urgency of the issue, noting that Khudavang Albanian monastery in Kalbajar is the largest monastery complex in Azerbaijan . Noting that Azerbaijan is a multicultural nation, the rector said that the preservation of Khudavang temple by the Azerbaijani people for more than thousand years is one of the clear examples of this. Rector Shirinov stressed that as a result of the liberation of the occupied lands, Khudavang Monastery has returned to its rightful owners, adding that this temple will be visited not only as the monastery of Azerbaijan, but as one of the most important temples in the world.

Professor Mahabbat Pashayeva, head of the UNEC Center for Multiculturalism drew the audience’s attention to the fact that the monuments of Caucasian Albania are the historical and cultural heritage of the Azerbaijani people and noted that Armenians have begun their occupation policy against the Azerbaijanis since the late 20th century, many of the historical monuments preserved for centuries have been destroyed, more than 1,000 of Azerbaijani historical monuments, including Albanian temples, which have been under Armenian occupation for nearly 30 years, have been savagely destroyed by Armenians, and the rest have been falsified and presented as Armenian churches. He noted that thanks to Commander-in-Chief Ilham Aliyev and glorious Azerbaijani army, along with native lands, historical monuments had been liberated during the 44-day war, emphasizing that the truth about Karabakh monuments and history would be conveyed to the world community. She expressed confidence that Karabakh, like other regions of Azerbaijan, will soon become a place of multicultural values.

Turkish Mardin-Diyarbakir Metropolitan Saliba Ozmen spoke about the historical ties of the Albanian Church with the ancient Assyrian Church in Turkey, emphasizing that many Albanian churches, such as the Khudavang Monastery in Azerbaijan, are a great wealth for the development of religious tourism. Expressing readiness to closely assist Albanian Church in the restoration of the Albanian-Udi Church, the metropolitan thanked Azerbaijani President Ilham Aliyev for protecting Albanian-Udi Christians and paying equal attention to many churches and mosques, including Khudavang Monastery.

Chairman of the Albanian-Udi Christian Religious Community of Azerbaijan Robert Mobili spoke about the rich cultural heritage of the Khudavang Monastery, the pearl of Kalbajar and a special place for Udi in the history of Azerbaijan. He said that today these temples under the auspices of Azerbaijan will be restored, and soon these Albanian temples will be open to the world for both pilgrimage and tourism.

Rafik Danakari, the preacher of Khudavang Monastery, said he was very proud of the return of the monastery to its owners. He said that after many years of longing, he experienced the joy of praying in his native monastery.

In their speeches, they proposed to expand cooperation in order to promote the heritage of Caucasian Albania in Canada and Europe, to cover the research conducted by the UNEC Center for Multiculturalism in foreign media, to organize joint conferences with European universities. They also stressed the importance of cooperation in educating both European and Azerbaijani youth about the heritage of Caucasian Albania.

In conclusion, Professor Mahabbat Pashayeva said that all the proposals voiced by the conference participants would be evaluated.