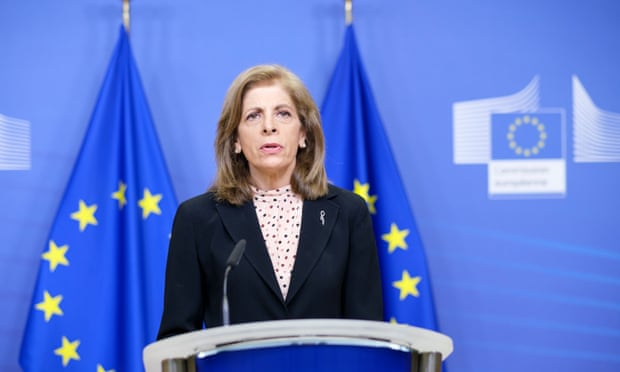 The EU has threatened to block exports of coronavirus vaccines to countries outside the bloc such as Britain, after AstraZeneca was accused of failing to give a satisfactory explanation for a huge shortfall of promised doses to member states, AzVision.az reports citing the Guardian.

The pharmaceutical company’s new distribution plans were said to be “unacceptable” after it “surprisingly” informed the European commission on Friday that there would be significant shortfalls on the original schedule.

The EU has been due to receive 100m doses in the first quarter of this year. But it is feared that the bloc will only receive half of that despite making large advance purchases ahead of authorisation of the vaccine by the European medicines agency.

In a heated call with AstraZeneca’s chief executive, Pascal Soriot, on Monday, the European commission president, Ursula von der Leyen, said the company must live up to its contractual obligations. The EMA is expected to authorise the vaccine by the end of this week.

Von der Leyen’s spokesperson said: “She made it clear that she expects AstraZeneca to deliver on the contractual arrangements foreseen in the advance purchasing agreement.

“She reminded Mr Soriot that the EU has invested significant amounts in the company up front precisely to ensure that production is ramped up even before the conditional market authorisation is delivered by the European Medicines Agency.

“Of course, production issues can appear with the complex vaccine, but we expect the company to find solutions and to exploit all possible flexibilities to deliver swiftly.”

The EU’s health commissioner, Stella Kyriakides, made a televised statement to express her frustration at the company’s behaviour, warning that the answers so far provided had not been satisfactory.

Late on Monday evening following discussions with executives representing the pharmaceutical company, Kyriakides tweeted: “Discussions with AstraZeneca today resulted in dissatisfaction with the lack of clarity and insufficient explanations.

“EU member states are united: vaccine developers have societal and contractual responsibilities they need to uphold.

“With our member states, we have requested from [Astrazeneca] a detailed planning of vaccine deliveries and when distribution will take place to member states. Another meeting will be convened on Wednesday to discuss the matter further.”

The development has raised pressure on the commission just as it is being criticised for the slow rollout of vaccination programmes in EU member states in comparison with the UK and the US.

Kyriakides said Brussels would now insist on being notified of any exports of vaccines from EU sites, including that produced by Pfizer on which the UK is reliant on European laboratories for supplies, raising the spectre of export bans.

“But there is a problem in the supply side. Last Friday, the company AstraZeneca surprisingly informed the commission and the European Unionmember states that it intends to supply considerably fewer doses in the coming weeks than agreed and announced.

“This new schedule is not acceptable to the European Union. That is why I wrote a letter to the company at the weekend in which I asked important and serious questions. The European Union has pre-financed the development of the vaccine and its production, and wants to see the return.”

Kyriakides said the EU wanted to “know exactly which doses have been produced where by AstraZeneca so far. And if, or to whom, they have been delivered”.

“These questions were also discussed today in the joint steering board of the commission and the 27 member states with AstraZeneca,” she said. “The answers of the company have not been satisfactory so far. That’s why a second meeting is scheduled for tonight. The European Union wants the order and pre-financed doses to be delivered as soon as possible. And we want our contract to be fully fulfilled”.

The EU has spent €2.7bn (£2.3bn) on the rapid development and production of coronavirus vaccines. Kyriakides said the commission had proposed that the member states agreed on “an export transparency mechanism be put in place, as soon as possible”.

Germany’s health minister, Jens Spahn, gave Berlin’s backing to the commission proposal. “We, as the EU, must be able to know whether and what vaccines are being exported from the EU,” he said. “Only that way can we understand whether our EU contracts with the producers are being served fairly. An obligation to get approval for vaccine exports on the EU level makes sense.”

Astrazeneca said in a statement that the company’s chief executive in his conversation with Von der Leyen had “stressed the importance of working in partnership and how AstraZeneca is doing everything it can to bring its vaccine to millions of Europeans as soon as possible.”