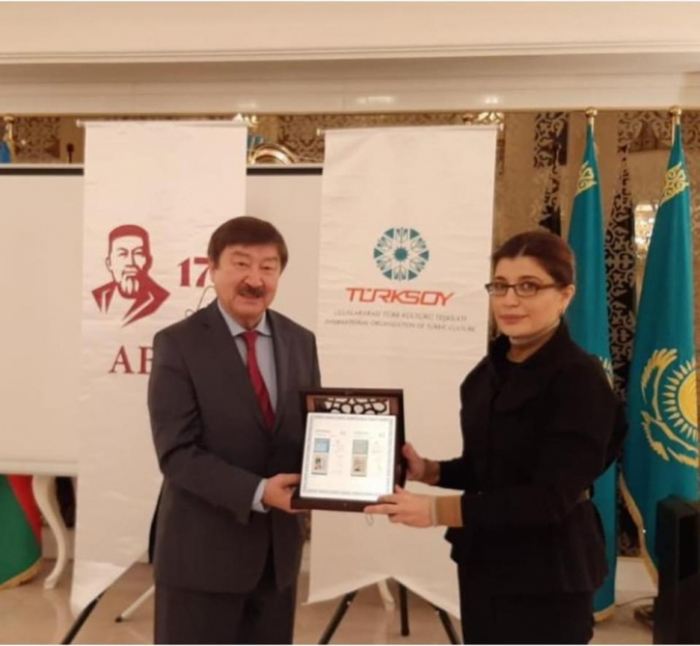 The Embassy of the Republic of Kazakhstan in the Republic of Azerbaijan has hosted a presentation of the art album "Reading Abay", published with the support of TURKSOY in honor of the 175th anniversary of Abai Kunanbayev, as well as a ceremony of awarding medals.

At the ceremony, President of the International Turkic Culture and Heritage Foundation Gunay Afandiyeva was awarded with a medal "Abai 175 years" by the Secretary General of TURKSOY Dusen Kaseinov.

At the same time, Gunay Afandiyeva presented Dusen Kaseinov postage stamps issued by the Foundation in Spain in honor of the anniversaries of two great figures of the Turkic world: the 175th anniversary of the significant poet of Kazakhstan Abai Kunanbayev and the 135th anniversary of the outstanding Azerbaijani composer Uzeyir Hajibayli.

In her remarks, Gunay Afandiyeva noted that Abai Kunanbayev left a bright mark in the history of not only the Kazakh people, but the entire Turkic world as a whole. The President of the Foundation also emphasized that one of the main priorities of the International Turkic Culture and Heritage Foundation is the study, research, protection and promotion of the heritage of the genius personalities of the Turkic world on the world stage.

Along with the heads of Turkic Cooperation Organizations, the presentation was attended by the Ambassador of Kazakhstan to Azerbaijan Serzhan Abdykarimov, as well as representatives of scientific and creative circles of Azerbaijan.