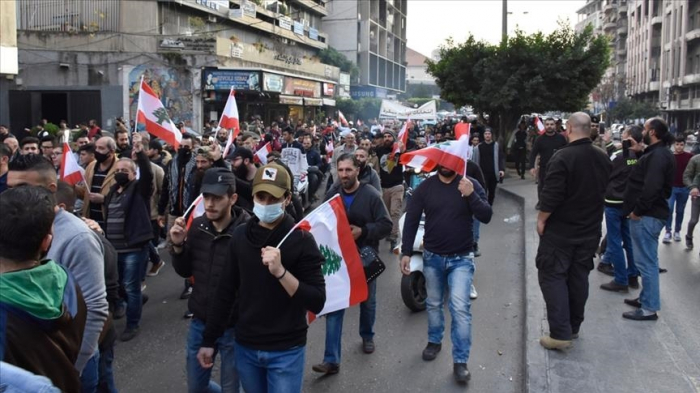 At least 226 people were injured late Wednesday in clashes between protesters and security forces in Tripoli district north of the Lebanese capital of Beirut, AzVision.az reports citing Anadolu Agency.

For days, Lebanon has witnessed protests against a coronavirus lockdown and what protestors describe as the government's inability to stem the spread of the virus as hospitals reach maximum capacity.

The protesters gathered in Sahet Al Nour in the center of Tripoli and attempted to storm the government building in the square.

Security forces tried to disperse them using tear gas while the demonstrators responded with stones, Molotov cocktails and fireworks.

Hand grenades were thrown at security forces and two of them exploded, Lebanon’s Internal Security Forces said on Twitter.

At least nine people were wounded and military vehicles were damaged due to hand grenades, it added.

The Lebanese Red Cross said 35 people were transported to hospitals and 67 were treated at the scene.

Meanwhile, the state-run National News Agency (NNA) reported that 31 of the 124 injured people treated by the Lebanese Emergency Response Units were transferred to hospitals.

At least 226 people were injured in the clashes, NNA said.

The Lebanese government announced that it was extending a nationwide curfew to Feb. 8 as part of measures to stem the spread of the coronavirus.

Earlier Wednesday, the Lebanese army said in a tweet that 31 soldiers were injured due to an attack by protesters in the city of Tripoli while five protesters were arrested.

"There may be parties behind the moves in Tripoli that want to send political messages and there may be those who take advantage of the people's pain and the living distress that the poor and those with income suffer from," Prime Minister-designate Saad Hariri tweeted, without directly accusing anyone.