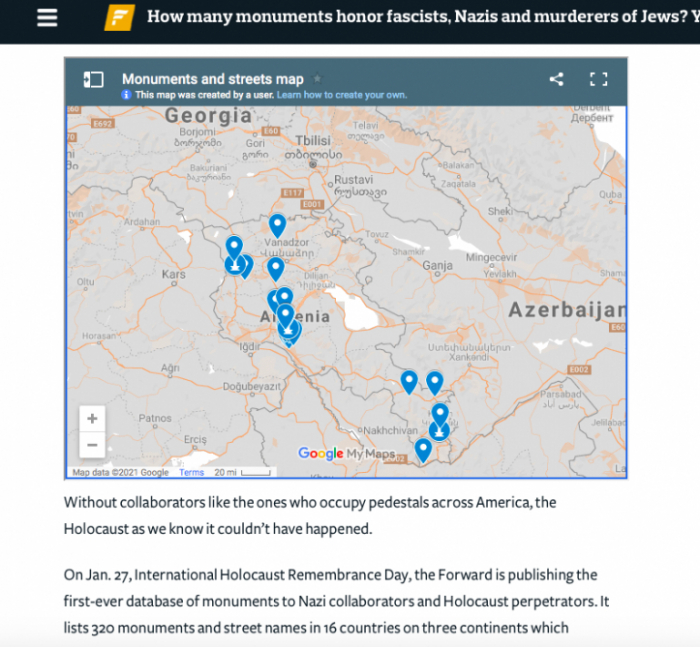 There are hundreds of statues and monuments around the world to people who abetted or took part in the murder of Jews and other minorities during the Holocaust. The American publication "Forward" published a list of statues of Nazis in different parts of the world.

The Nazi collaborators of Central and Eastern Europe weren’t as fastidious at keeping records as their Third Reich allies, which makes it difficult to arrive at a precise number of their victims. As a rough estimate, the Nazi collaborators honored with monuments on U.S. soil represent governments, death squads and paramilitaries that murdered a half million Jews, Poles and Bosnians.

Holocaust perpetrators is the correct term for these men and organizations, for they played an integral part in the Final Solution, arresting and deporting Jews to concentration camps or gunning them down in the forests and fields of Eastern Europe (one-third of all Holocaust victims were killed in what’s called the “Holocaust by bullets”).

On Jan. 27, International Holocaust Remembrance Day, the Forward is publishing the first-ever database of monuments to Nazi collaborators and Holocaust perpetrators. It lists 320 monuments and street names in 16 countries on three continents which represent men and organizations who’ve enabled — and often quite literally implemented — the Final Solution.

No one should be surprised that Armenia is one of the leading countries in this list.

In 2016, Armenia’s capital triggered international headlines after erecting this giant monument to nationalist Garegin Nzhdeh (1886–1955) in the center of Yerevan, where Nzhdeh also has a street and a central square. Nzhdeh placed the Armenian Legion at the disposal of the Nazis; these soldiers served the Third Reich in the Caucasus, Crimea, and France.  Gyumri, Kapan and seventeen other locations — Gyumri, Armenia’s second largest city, honors Nzhdeh with a street and a prominent statue, above left. Kapan, above right, also has a Nzhdeh street and a memorial, erected 2003. There are additional Nzhdeh streets in Agarak, Aparan, Artik, Ashtarak, Burastan, Byuravan, Dvin, Goris, Mrgavan, Mrgavet, Nshavan, Sisian, Stepanavan, Vanadzor, Verin Artashat and Yeghvard. Nzhdeh also has a village named after him.