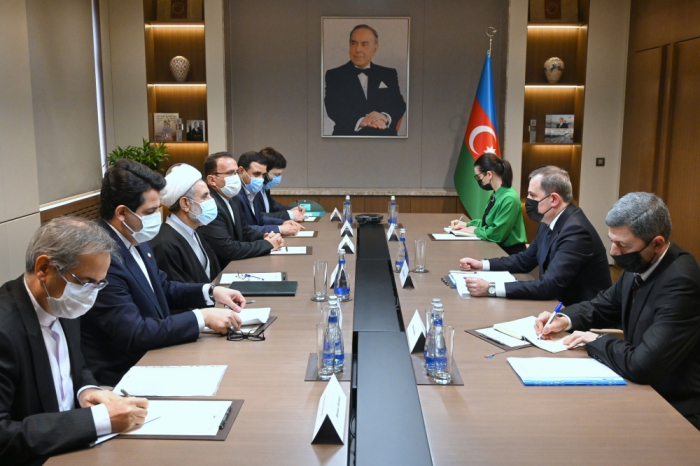 On February 17, 2021, Minister Jeyhun Bayramov met with the delegation led by Mojtaba Zonnour, the Chairman of the National Security and Foreign Policy Commission of the Islamic Consultative Assembly of the Islamic Republic of Iran.

Welcoming the delegation of the Islamic Consultative Assembly of the Islamic Republic of Iran, Minister Jeyhun Bayramov stated that this visit would contribute to the development of high-level relations existing between the two countries. The Minister stressed that the existing historical, cultural, and religious ties between our countries form the basis of bilateral cooperation. It was noted that continuous support of Iran to the sovereignty and territorial integrity of Azerbaijan, as well as the inviolability of its borders, particularly the support of the Islamic Republic of Iran at all levels during the Patriotic War, has been highly appreciated by the Azerbaijani people.

Mojtaba Zonnour congratulated the Azerbaijani state and people on the great victory, as well as emphasized Iran's support for Azerbaijan's right cause and solidarity with Azerbaijan. He expressed his condolences to the families of the martyrs and the people of Azerbaijan and wished a speedy recovery for the wounded.

It was noted at the meeting that there is great potential for further development of bilateral cooperation. It was also stated that the respective parliaments in their own rights can contribute to the expansion of these relations.

It was noted that the new situation and new opportunities in the region could lead our countries to implement a number of cooperation projects. The cooperation between our countries at the international level was also noted with satisfaction.