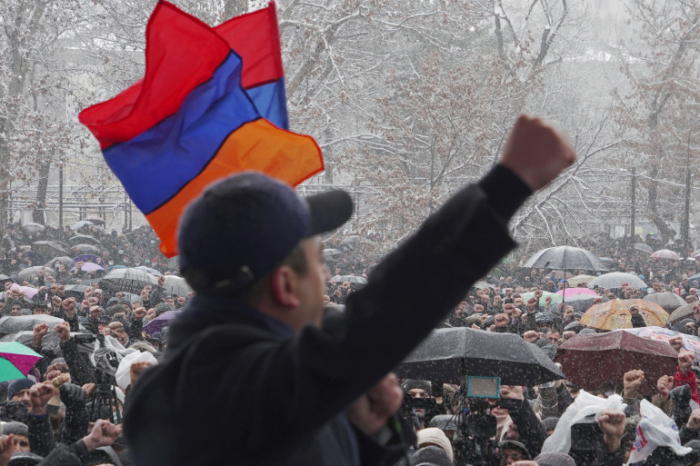 Months-long calls for Armenian Prime Minister Nikol Pashinyan to resign escalated again on Tuesday, as thousands of protesters staged the third demonstration in a week demanding he quit over his handling of the Nagorno-Karabakh conflict with Azerbaijan.

Police cordons were deployed to guard government buildings near Republic Square in the capital Yerevan, with officers accompanying Pashinyan when he walked from one building to another as demonstrators shouted “traitor!”.

The demonstrations follow protests last November, which grew after Pashinyan signed a Russian-brokered peace deal following six weeks of conflict that claimed thousands of lives and saw swathes of territory in and around Nagorno-Karabakh ceded to Azerbaijan.

The mountainous region is internationally recognised as Azerbaijan’s land, but has been under the control of ethnic Armenian forces and self-appointed Armenian officials, backed by Armenia, since an earlier war between the rivals concluded in a ceasefire in 1994.

The protests had gone dormant for a spell in the depth of Armenia’s winter, but first resumed on Saturday, when thousands of demonstrators took to Yerevan’s streets.

“Actions of [civil] disobedience need to continue for a long time, the city should be paralysed every once in a while,” said Ayk Mamidzhanyan of the Republican Party of Armenia.

Despite the pressure, Pashinyan has refused to step down. He has defended the peace deal as a painful but necessary move that prevented Azerbaijan from overrunning the Nagorno-Karabakh region.

In an apparent concession to the protesters, Pashinyan in December raised the prospect of early parliamentary elections this year. However, Pashinyan’s My Step parliamentary alliance appeared to backtrack on that proposal earlier this month.