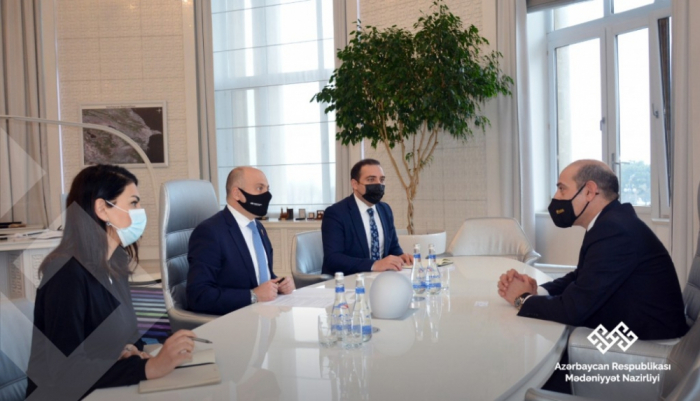 Azerbaijan`s Minister of Culture Anar Karimov has met with Ambassador of the Hashemite Kingdom of Jordan to the country Sami Abdullah Ghosheh.

Minister Anar Karimov hailed the successful development of bilateral relations between Azerbaijan and Jordan in many areas. He noted that the friendly relations between the two countries also contribute to the expansion of cooperation in the field of culture.

Touching upon the visit of the delegation led by Director-General of the Islamic World Educational, Scientific and Cultural Organization (ICESCO) Dr. Salim M. AlMalik to the liberated territories of Azerbaijan on January 12, Karimov said that the ICESCO delegation has witnessed the destruction of cultural, historical and religious heritage of Azerbaijan.

Ambassador Sami Abdullah Ghosheh praised the current state of cultural ties between the two countries, expressing his confidence for further development of this cooperation.

During the meeting, the sides also exchanged views on the organization of mutual cultural days and joint exhibitions between the two countries, as well as future prospects for cooperation, exchange of experience, as well as implementation of joint projects.