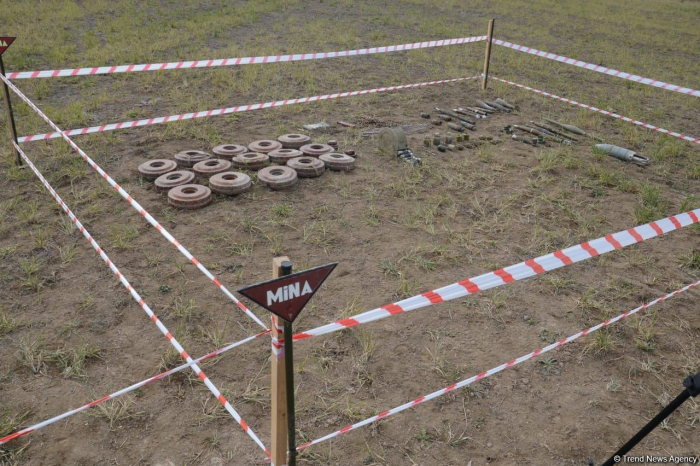 Commissioner for Human Rights (Ombudsperson) of Azerbaijan, Sabina Aliyeva, made a statement on unmarked minefields in the territories of Azerbaijan liberated from Armenian occupation.

Through the statement, the ombudsperson expressed serious concern about the minefields, which pose a threat to people.

The 44-day Armenian-Azerbaijan Second Karabakh War ended on November 10, 2020 following a trilateral statement signed between Armenia, Azerbaijan and Russia. The territories of Azerbaijan, which were under Armenian occupation for about 30 years, were liberated in accordance with international law.

“The liberated towns and villages were completely destroyed by the Armed Forces of Armenia, and the territories were mined without marking. During the occupation, more than 100,000 mines were laid down on these lands, and Armenia still refuses to provide a map of the minefields,” said the ombudsperson.

“Following the war, dozens of people were killed or injured as a result of the mine explosions, among which 10 dead and 11 seriously injured were civilians. Mines can remain active and pose a serious threat for decades. It is also a serious obstacle to the return of internally displaced persons to those places and significantly delays the process of recovery and development,” Aliyeva noted.

“Armenia, along with the use of anti-vehicle mines, placed anti-personnel mines in all previously occupied territories, which violates the principle of prohibition of indiscriminate attacks of international humanitarian law. At the same time, Armenia refuses to provide maps of mined territories,” the statement added.

The ombudsperson further noted that indiscriminate attacks are prohibited under Annex I of the 1949 Geneva Conventions.

“Armenia must unconditionally provide Azerbaijan with maps of mined areas to ensure the protection of human life,” said the statement.

“I call on all relevant international organizations to take urgent action within their mandate to protect the life and health of innocent people and put an end to violations of human rights,” the statement said.