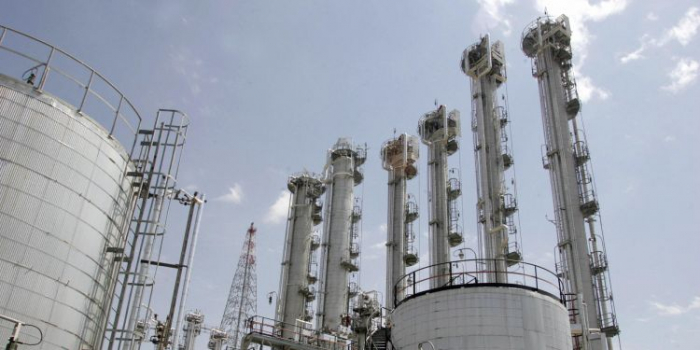 Iran's Natanz nuclear site suffered a problem Sunday involving its electrical distribution grid just hours after starting up new advanced centrifuges that more quickly enrich uranium, state TV reported. It was the latest incident to strike one of Tehran's most-secured sites amid negotiations over the tattered atomic accord with world powers.

"Kamalvandi said, fortunately, the incident has not caused any human damage or contamination," a state TV anchorwoman said. "The cause of the incident is under investigation."

The word state television used in its report attributed to Kamalvandi in Farsi also can be used for "accident."

Natanz is among Iran's most-secured nuclear sites. It has been the scene of several mysterious incidents over the past year, as world powers and the Islamic republic attempt to stitch the tattered nuclear deal back together.

Natanz suffered a mysterious explosion in July that authorities later described as sabotage.

Israel, Iran's regional archenemy, has been suspected of carrying out an attack there, as well as launching other assaults, as world powers now negotiate with Tehran in Vienna over its nuclear deal.

Iran has breached many restrictions imposed by a 2015 deal on its atomic activities in response to former President Donald Trump's withdrawal from the deal in 2018. The two nations have laid out tough stances at indirect talks in Vienna this week on how to bring both back into full compliance with the accord.

A live video link carried on state TV showed Rouhani ordering the injection of uranium gas into 164 IR-6 centrifuges, 30 IR-5 centrifuges, and mechanical tests on IR-9 machines with the capacity of 50 early IR-1 machines - a likely new breach of the nuclear deal.

The ceremony unveiled 133 advances over the past year in the country's nuclear industry mostly in the fields of medicine, power, agriculture, and energy, state television said.

"Once again, I stress that all our nuclear activities are peaceful and for non-military purposes," Rouhani said in televised remarks.

"We continue to be committed to our pledge to NPT (non-proliferation treaty) and to the world not to deviate militarily from our nuclear program," Rouhani said.

The talks in Vienna, in which European Union officials are shuttling between the remaining parties to the deal and the United States, aim to restore the bargain at the core of the agreement - restrictions on Iran's nuclear activities in exchange for the lifting of US and other international sanctions.