"Armenia's use of 'Iskander' is a war crime" - Ilham Aliyev 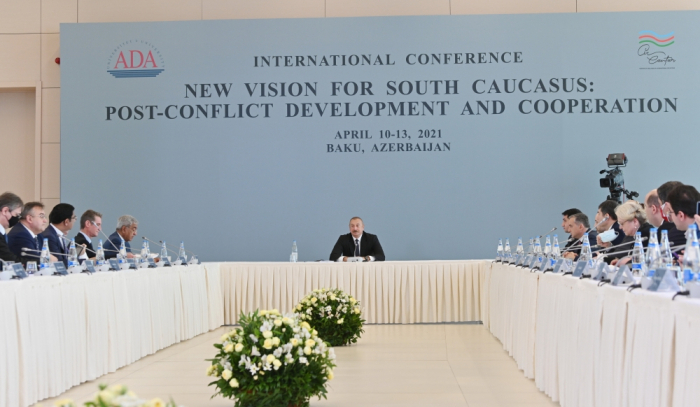 Sargsyan, who committed the Khojaly genocide and had blood of peaceful Azerbaijanis in his hands criticized Pashinyan for not using "Iskander" to fire our gas pipelines. It is a war crime.

Azerbaijani President Ilham Aliyev made the remarks during his speech at the ‘A New Look at the South Caucasus: Post-Conflict Development and Cooperation’ conference at ADA University in Baku on April 13, 2021, AzVision.az reports.

The head of state said: “Movsesyan confessed the use of "Iskander" against us. Afterwards, we got a video recording on the use of "Iskander". I commanded them to investigate and we found them. Why didn't we find them then? Because there was snow in Shusha immediately after the war, and it was snowing there even when I was there in January-February. Then the snow melted and we found them.”

President Ilham Aliyev also emphasized that what happened after finding the remains of the "Iskander" missile was strange. He said that the Chief of General Staff of Armenia couldn’t comment on the issue. How can we understand this? The answer must be either "yes" or "no." Of course, "yes". Otherwise, they would deny the use of “Iskander”.