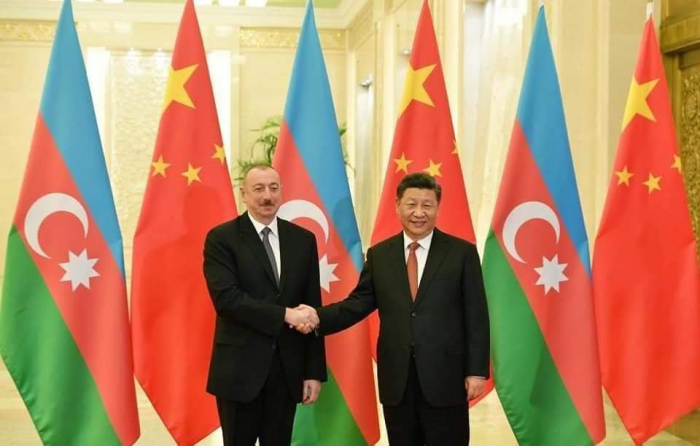 The author is a Ph.D. in Public Administration, Yanshan University, Qinhuangdao city, China

On April 2, 2021, Azerbaijan and China did celebrate the 29th anniversary of diplomatic relations. China is one of the first countries to recognize the independence of the Republic of Azerbaijan, which was on December 27, 1991, and on April 2, 1992, diplomatic relations were established between the two countries. China opened its embassy in 1992 in Baku and after a year – in 1993 Azerbaijan opened an embassy in Beijing.

Azerbaijan gives a great value to the development of relations with China and interested in increasing cooperation in all spheres. The Belt and Road Initiative (BRI), specifically the Trans-Caspian East-West Trade and Transit Corridor gives very good opportunities for boosting bilateral cooperation in the economic sphere, such as in the field of investments, trade and transit areas. According to the data released on January 17, 2021, by the State Customs Committee of the Republic of Azerbaijan, bilateral trade turnover between China and Azerbaijan reached up to US$ 1.847 billion in 2020, but there was a decrease of 15.4% with US$ 337 million. At the same time, Azerbaijan's imports were US$ 1.414 billion in the background of a 1.3% decrease (keeping growth in the first 11 months) with US$ 18 million. Exports reached up to US$ 433 million in the background of a huge decrease of 42.4% with US$ 319 million. At the time of that report, China was the 4th largest trading partner of Azerbaijan, covering 7.6% of Azerbaijan's total trade turnover; the 3rd largest source of imports, covering 13.2% of Azerbaijan's total imports; and the 9th largest export destination for Azerbaijan, covering 3.2% of total exports. But one important point should be mentioned that there is still a great potential for trade turnover growth.

In this article, I will mainly talk in the background of the Belt and Road Initiative.

During his visits to Central Asia and South East Asia in September and October of 2013, Chinese President Xi Jinping proposed a plan to jointly develop the Silk Road Economic Belt and the 21st century Maritime Silk Road. The Belt and Road Initiative got widespread attention because it claims to support the current global and regional development trends as well as to help the countries in similar conditions to co-develop and cooperate in an open "common" economic and the global free trade system. It means the BRI has a very strategic importance that will present a huge range of new opportunities for all the countries and regions covered by the Belt and Road routes or "corridors".

Mainly the Belt and Road Initiative runs through the three continents – Asia, Europe, and Africa. The key idea is to connect the East Asian economic circle at one and with the developed European economic circle at the other, and mobilizing an enormous economic potential of inland countries.

According to the Belt and Road Initiative outline, China is collaborating with countries along the BRI routes to develop six economic corridors that will connect the major cities along the international routes and the economic industrial parks. The Silk Road Economic Belt and the Maritime Silk Road are part of a multi-trillion dollar plan that spans more than 60 countries and accounts for more than 40% of the global GDP.

The Belt and Road Initiative is intended to leverage international transport routes, as well as core cities and ports to strengthen partnerships and build six international economic cooperation corridors.

Some researchers argue that a comparison of the Silk Road Transport Corridor or TRACECA and the China-Central Asia-West Asia Economic Corridor projects disclose that their visual similarity is merely limited to their regional context. The primary distinction between them is the first project, initiated by the European Union or "the West" aims to restore the historic Great Silk Road and eventually link the economies of these countries to the European Union, whereas the second project initiated by China or "the East", aims to establish trade and economic relations between the countries involved. Meanwhile, the first project is primarily transport-related, whereas the second project is more multidimensional, involving trade and a variety of economic sectors.

According to several data, the most important step in developing this corridor was in June 2015 at the "Third China-Central Asia Co-operation Forum" held in Shandong province, China. During the Forum, China signed a joint declaration with the five Central Asian countries that were targeted to "jointly building the Silk Road Economic Belt".

Recently, China has many huge development projects in the Caucasus region that covers a huge amount of investment and trade. One of the key points of the BRI is multidirectional cooperation between Eastern and Western countries throughout Central Asia and the Caucasus region.

In December 2015, China and Azerbaijan signed a Memorandum of Understanding (MOU) on the construction of the Silk Road Economic Belt. The signing of the MOU indicates that the two countries' significant cooperation has progressed to a new level. As a response to Azerbaijan's support to China's Belt and Road Initiative, China is ready to strengthen policy communication with Azerbaijan and integrate both sides' development strategies. As a result of these relations, the Chinese Government boosts proficient Chinese enterprises to invest in Azerbaijan. Azerbaijan is also willing to have an all include cooperation with China, such as inviting the Chinese enterprises' investments for setting up factories and participate in the development of infrastructure construction, industrial parks, and the energy sector in Azerbaijan.

With its rich oil and natural resources in the Caspian Sea, Azerbaijan is the key point of the China-Central Asia-West Asia Economic Corridor. Due to its proximity to Asia and Europe since the Ancient Silk Road Times, Azerbaijan has a long history of hosting thousands of traders from land and the sea. In reality, the trade relations between China and West Asia are mainly based on the maritime routes, and the China-Central Asia-West Asia Economic Corridor is a land-based alternative for these traditional routes. In this economic corridor framework, Baku, the capital city of Azerbaijan is the shortest way to reach West Asia from China.

The current data shows that China has already got a big opportunity to use the world's one of the fastest trains and a rail track that transports goods from Aktau and Turkmenbashi ports to the new Baku International Sea Trade Port and then westward to Turkey and Europe.

In August 2015, the Trans – Caspian International Transport Route was launched, and the Nomad Express, carrying goods from northwest China's city of Shihezi, traveled through the port of Aktau and arrived at Baku. Within this framework of the relations, China has been encouraging the interconnection roads to the West of the Caspian Sea. Currently, both China and Azerbaijan appear to have vested interests in the construction of railway lines for the transportation of oil and gas. As a result of this collaboration, relations between China and Azerbaijan are rapidly improving and this point gives to Azerbaijan a great opportunity to become an important partner in the Silk Road Project – which is called by the experts one of the great initiatives of the 21st century.