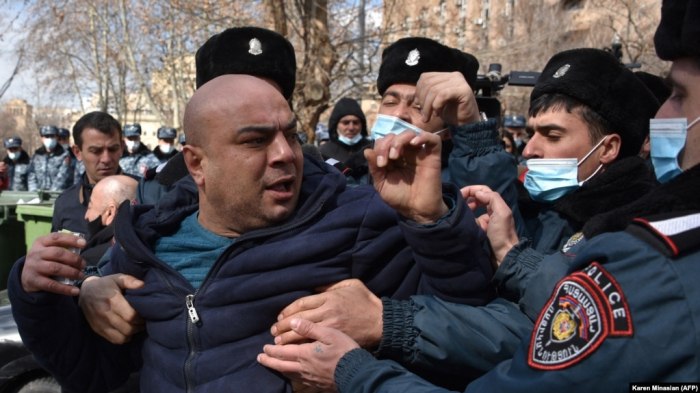 When Armenian Prime Minister Nikol Pashinian signed a Russian-brokered ceasefire in November to end the war with Azerbaijan over Nagorno-Karabakh, it created a tumultuous postwar crisis that has eroded public confidence in Yerevan's political establishment.

Opinion polls show the approval rating of Pashinian's government has fallen from about 60 percent in September 2020 to around 30 percent today.

The ongoing anti-government protests around Armenia once again indicate the declining approval rating of Pashinyan.  It should be noted that PM Pashinyan’s visit to Meghri (Mehri) town, Syunik province on April 21, 2020 sparked a protest. The locals called PM Pashinyan a 'traitor', urging him to immediately leave the town. After strong protests, Pashinyan was forced to leave the city. 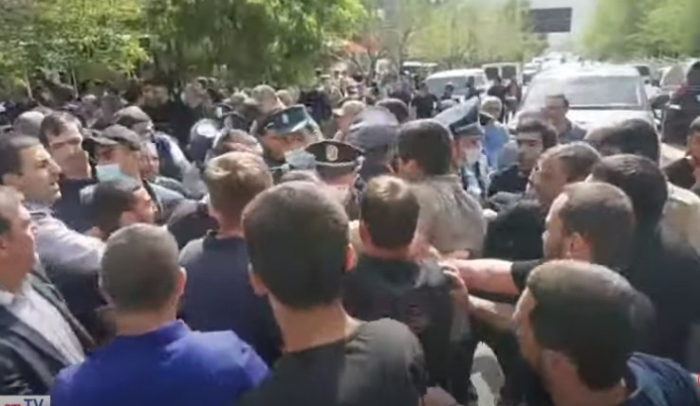 Pashinian's allies -- faced with political upheaval and declining public confidence in politicians -- are now working to change the country's election laws ahead of snap parliamentary elections expected in June.

The 45-year-old Pashinian's My Step alliance is revamping parts of the Electoral Code that were put in place in 2016 by his predecessors, the Republican Party of Armenia (HHK), two years before the "Velvet Revolution" that swept him into office.

My Step gained power with 70 percent of the vote in 2018 snap elections after Pashinian led mass protests against the HHK-led government. It was enough for My Step to take a commanding 88 of the 132 seats in Armenia's single-chamber parliament.

By comparison, the discredited pro-Russian HHK of former President Serzh Sarkisian failed to clear the minimum 5 percent threshold needed to win parliamentary seats. That left the Republicans sidelined along with more than a dozen other small parties that remain outside of parliament.

Five lawmakers have quit My Step's parliamentary faction since the end of the war to become nonaligned deputies -- leaving My Step with 83 parliament seats.

Strikingly, the two opposition parties in parliament have not benefited from My Step's evaporating support. Research by the International Republican Institute reveals a simultaneous decline in public support for the opposition Prosperous Armenia and a rival opposition faction, Bright Armenia.

Led by powerful businessman Gagik Tsarukian, Prosperous Armenia had been a member of the Republican Party's governing coalition from 2008 to 2012 --- calling itself a "nongoverning party" after that until 2015, when it formally declared itself in opposition to the Republicans.

Controversial former President Robert Kocharian has also been an influential figure in Prosperous Armenia, which has 24 deputies in the current parliament.

Bright Armenia is led by Edmon Marukian, a Western-educated former ally of Pashinian who is seen to have pro-European leanings. Bright Armenia has 17 deputies in the current parliament.

Rounding out parliament are eight nonaligned lawmakers, including two who vote with the My Step faction on many issues.

The HPS is not a separate political entity. But it organized demonstrations that brought thousands of protesters to the streets throughout the winter to demand Pashinian's resignation over his handling of the Nagorno-Karabakh war, which led to Armenian forces losing control of large swaths of territory.

Pashinian responded to the criticism by blaming his predecessors for the country's war losses -- including members of the HPS -- saying they had neglected Armenian's military forces for more than a decade.

Amid the mudslinging and declining public confidence in all political factions, Pashinian announced on March 18 that he will soon resign so the next general elections, originally scheduled for December 2023, can be moved forward to June 20.

Larisa Minasian, executive director of Open Society Fund-Armenia, says Armenia's political crisis has morphed into "a deep societal crisis -- meaning a substantial loss of trust in the government" and "frustration with the opposition, which obviously...feeds off the tragedy" of Armenia's battlefield losses.

"Recent polls show that the frustration is quite widely shared amongst the Armenian population," Minasian says. "An average of 42 percent and, in Yerevan, as much as 50 percent -- half of the population -- are really deeply frustrated with [all] sides.

"After a long back and forth to maneuver through the crisis, finally the government decided to go with snap elections...as the means to get out of this crisis," Minasian says.

Political analyst Stepan Grigorian says holding a new election without changing the Electoral Code created in 2016 by the then-ruling HHK will not resolve the deepening crisis.

"If we do not change the electoral code, we will have the same parliament. We will have a newly elected parliament and we will have, again, the current government in place," says Grigorian, who heads the Yerevan-based Analytical Center on Globalization and Regional Cooperation.

"We will be hearing this mutual accusation process again, where one side says, 'You're a traitor,' and the other one says, 'No, you're the traitor.'"

"That's why a transition to a 'multipartisan' system is what we need" to replace a parliament long characterized by the dominance of one party and a divided opposition, he says.

Grigorian says numerous smaller parties left out of parliament need to be brought into the political process so that views emerging across Armenia since the end of the war are also represented in the legislature.

"Our purpose is to get a discussion started so the parliament becomes multipartisan," he concludes.

In fact, the My Step alliance has been using its continued control of parliament to push through election law changes that had been among the promises made during the Velvet Revolution. A key amendment passed on April 1 eliminated so-called "district list" voting for individual candidates. That change to the technical rules of voting transforms Armenia's electoral system into one of fully proportional representation.

Bright Armenia, the party that first warned about faults within the district-list system, is now criticizing its elimination -- saying the move will leave regions outside of Yerevan underrepresented in the next parliament. None of Bright Armenia's deputies participated in the April 1 vote.

The opposition Prosperous Armenia faction boycotted the parliamentary session at which the change was approved.

Lilit Makunts, leader of the pro-Pashinian majority in parliament, says other amendments still could be introduced to the Electoral Code ahead of the June vote. On April 5, Makunts said those changes could include lowering the threshold needed by political parties to win seats -- a move that gives smaller parties a better chance to enter parliament.

She said any additional changes would have the backing of the Venice Commission, an influential advisory body to the Council of Europe on constitutional law. Makunts also said Armenia's Central Election Commission must deem any changes as feasible within the time remaining before the vote and consult other political parties. 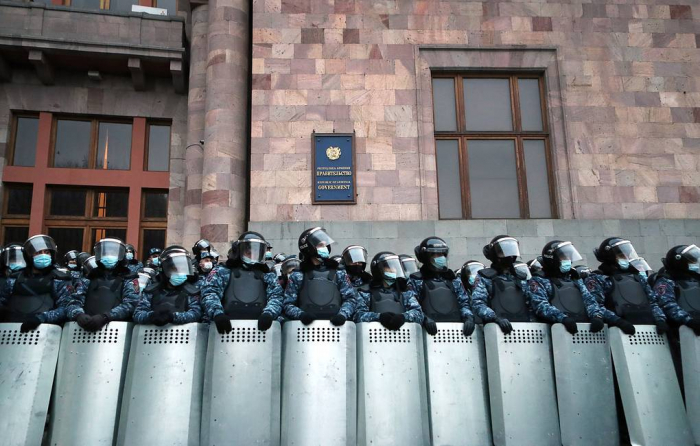 The Electoral Code pushed through parliament ahead of the 2017 parliamentary elections was widely seen as giving unfair advantages to the ruling HHK. That party was described by The Economist magazine in 2007 as a "typical post-Soviet 'party of power' mainly comprising senior government officials, civil servants, and wealthy business people dependent on government connections."

Vardine Grigorian is the coordinator of Democratic Institutions Monitoring at the Vanadzor branch of the Helsinki Citizens' Assembly-Armenian Committee. Her NGO has taken part in proposing and drafting changes to the 2016 election laws in an attempt to level the playing field for smaller political parties.

Grigorian explains that the HHK had seen a way in 2016 to gain an advantage by changing technical details of what was then a mixed electoral system -- a blend of proportional representation and races between individual candidates.

For proportional voting, each party presents its party list of potential lawmakers. Voters cast a ballot for the party of their choice and parliamentary seats are distributed according to the percentage of votes received by each party -- provided a party crosses the minimum threshold needed to enter parliament.

In past elections, voters in about half of Armenia's precincts would cast ballots in races between individual candidates. "Before the 2017 parliamentary elections, if two majoritarian candidates were competing against each other the winner would take all. But these votes did not transfer to party votes," Grigorian notes.

"The Republican Party realized this mixed system was not conducive to getting as many votes as they needed," she says. "So they introduced something called 'district lists,' which allowed any candidate running from a party to bring their votes directly to the political party.

"This allowed the Republican Party to get more than 100,000 additional votes in the 2017 parliamentary elections, even though their approval ratings were a lot lower than the years before," she says.

"The district lists were good for the protection of the ruling [HHK] regime because it allowed them to be able to recruit all the influential business and administrative people in the regions that would be able to bring in as many votes as possible," she says. "We saw while looking at the electoral process how violations evolved and became so sophisticated. Before, election fraud had been actual falsification of results, forging protocols, and things like that.

"Then, the violations moved out of the polling stations. It became issues of vote buying, abuse of administrative resources, and forcing people to participate in meetings and to vote in a certain way by threatening them with losing their job," she says.

Political analyst Stepan Grigorian agrees. He notes that district lists are a Western norm that works well in established and affluent democracies. "But Armenia is a poor country. In our situation, the district-list system meant a bigger influence for those with money and administrative resources," he tells RFE/RL. "Removing the district lists was necessary to diminish the serious influence that our oligarchs had on the outcome of elections through their resources and money, and through corruption."

Armenia's district lists also discouraged the development of smaller political parties because of a requirement that all political parties have at least five candidates in all 13 regions of Armenia -- with each paying a high deposit cost.

"All the conditions were there for less political participation, for fewer parties to participate, and for more parities to go into alliances and form alliances before they entered into parliament," Vardine Grigorian says.

"These alliances were not really sustainable. Most of them would fall apart with the next disagreement that appeared in parliament," she says. "Alliances would be a onetime opportunity to be able to pass that minimum threshold. But then the parliament wouldn't reflect the will of the people and what they voted for."