"Liberation" or Occupation? Devastation in 1993-2020 and Post-War Reconstruction - OPINION 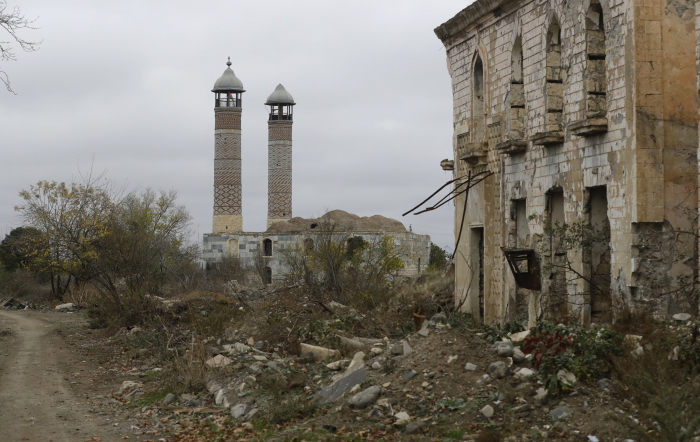 The year 2020 went down in history as glorious for Azerbaijan. As a result of the 44-day Patriotic War led by our wise President and Commander-in-Chief of the Armed Forces Ilham Aliyev, Karabakh was liberated from occupation and an end was put to our people's longing for the homeland. After 30 years of occupation of Jabrayil, Gubadli, Zangilan, Fuzuli, Aghdam, Kalbajar, Lachin districts, Shusha and Hadrut, as well as in hundreds of villages and settlements, the tricolour Azerbaijani proudly flies there again. The more gratifying the return of our territories, the more heartbreaking it is to see those places.

Although it was known in advance that the enemy had wreaked havoc in the occupied territories, the scale of the tragedy was unimaginable. We look and see now: Armenian occupiers have destroyed the entire infrastructure, destroyed our cities, settlements and villages. The whole world sees what savagery the Azerbaijani people were faced with. There have been many wars in the history of mankind but nowhere has there been so much cruelty and so much hostility. Such atrocities were unseen even during World War II, religious and historical sites were not destroyed. The deplorable situation in Karabakh shows that Armenian fascism is the ugliest and cruel of all fascisms in all countries.

The unimaginable atrocities committed by the enemy, the immeasurable destruction have been documented and recorded by the photo lens. AZERTAC's film crew is also closely involved in this work. Filming has been going on in Aghdam, Fuzuli, Jabrayil, Zangilan and Khojavand districts for several months. The group, which includes a journalist, a photographer and a cameraman, travels from a village to village, from a neighbourhood to neighbourhood, from one street to another, from one house to another, filming traces of Armenian atrocities and recording the extent of the destruction.

In fact, words are a weapon and journalists, soldiers, during the war. Building on this principle, AZERTAC has mobilized all its creative and technical potential from the early hours of the second Karabakh war, worked 24/7 to regularly cover the course of hostilities, convey the truth about the conflict and information about the enemy's war crimes to the world community. From day one, our correspondents commissioned to the war zone prepared photo and video reports from the regions liberated by the glorious Azerbaijani Army and circulated them the world over.

The following are some of the photos our film crew sent in from the Fuzuli, Zangilan and Jabrayil districts. The scenes depicted need no explanation. As President Ilham Aliyev said, it is as if a savage tribe has swept through these places.

One of the places destroyed by the enemy is the city of Fuzuli. The city of Fuzuli, which borders on Jabrayil, Khojavand, Aghjabadi, Beylagan districts and Iran along the Araz River, was occupied by Armenian armed forces in 1993. The glorious Azerbaijani Army liberated the city of Fuzuli on 17 October 2020.

Historical memory: Before the occupation, the city of Fuzuli had a population of 18,965 people. In other words, it was home to 4,741 families. There were 3,487 courtyard houses, 62 residential buildings, five hospitals, three underground water pipes, seven historical sites, 19 schools and 10 kindergartens in the city. There was also a culture house, two clubs, four libraries, five music schools, a history and ethnography museum, a technical vocational school, a taxi terminal, a cocoon reception station, an ancient bath, an outdoor cinema, a statue of Fuzuli, a building of the “Araz” newspaper, the 17th-century Haji Alakbar mosque, a monument to Aghabala Abdullayev, a culture centre, a central market, a textile factory, an eye hospital and other buildings in the city. There are no traces of them now. Residents of Fuzuli may try to find their street, neighbourhood or house in these photos. Unfortunately, there is nothing to see but a pile of stones...

What is left of the strategically located Minjivan settlement?

The photos depicting the current state of the Minjivan settlement, one of the largest settlements in Zangilan, were taken in April this year. Apparently, there is not a single safe building there. However, located in a strategically important position on the main railways and highways, Minjivan was once distinguished by its unique appearance. The Julfa-Horadiz-Sarijalar-Osmanli railway used to pass through the settlement. After the occupation of the district by Armenia, the Minjivan railway station also ceased its operations. Later it was completely destroyed by Armenians.

Historical memory: Before the occupation, there were 995 houses and ancillary buildings in the Minjivan settlement. More than 4,600 people lived in the settlement, which covers an area of 1,254 hectares. There were 266 hectares of arable land, 14 hectares of hayfields, 15 hectares of mulberry orchards and 105 hectares of vineyards. The settlement was also home to about 20 office buildings, three schools, three kindergartens, four libraries, two culture houses, two post offices, two reservoirs, as well as a music school, a chemical association, a grain warehouse, a hospital, a mosque and other buildings, which have been destroyed or looted by the Armenian army. In addition, a railway hospital, an ancient bathhouse, an indoor and outdoor cinema, a commandant's office of the Minjivan border post of the State Border Service are among the demolished buildings.

One of the largest villages of Jabrayil District, Boyuk Marjanli, is located in the southeast of the Lesser Caucasus Mountains, in the Karabakh range.

Historical memory: Before the occupation, there were 863 houses in the village. the village with a population of more than 3,500 people had two schools, a hospital and a medical centre, a club, a library, a railway station, a stadium, agricultural facilities, a mill, a household service centre, a furniture store and other facilities. Now there is nothing left of any of that now. As can be seen from the photos, the scale of destruction is immeasurable.

The village of Boyuk Marjanli, occupied by the Armenian army on 23 August 1993, was liberated 27 years later, on the first day of the Patriotic War – on 27 September 2020.

Vugar Seidov is a political analyst and representative of AzerTAG in Germany. He holds a PhD in History from Moscow University and MPhil in international relations from Cambridge University.