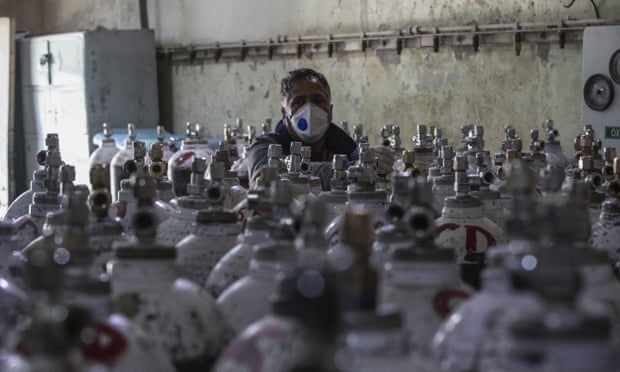 Hoarding oxygen and vital medicines in homes is “creating panic” and causing shortages in hospitals, according to senior Indian doctors, prompting fears of shortages for critically ill patients amid the worsening Covid crisis, AzVision.az reports citing the Guardian.

It comes as India recorded 352,991 new cases and 2,812 new deaths, both breaking all previous global records of the pandemic. The last week has seen a cumulative 89% increase in Covid-19 deaths in India and a total of 2.2m new cases, the highest seven-day increase experienced by any country.

Total infections in the country have passed 17m.

“Hoarding of injections like remdesivir and oxygen in homes is creating a panic and this hoarding is causing a shortage of these medicines,” said Dr Randeep Guleria, the director of the countries Institute of Medical Sciences, in a statement released by the ministry of health on Sunday night.

Guleria said most people should not need to be treated with oxygen and holding it in private homes could reduce availability for critical patients who needed it. He emphasised that Remdesivir was no “magic bullet”.

“Covid-19 is (a) mild infection and 85-90% people will only suffer from cold, fever, sore throat and body ache. Only symptomatic treatment at home is enough to ride through these infections and there is no need for oxygen or Remdesivir,” he said.

Demand for oxygen has risen more than 20% nationally in the past few days. In the capital Delhi, most hospitals have been reeling under acute oxygen shortages, sometimes coming within 30 minutes of supply running dry and putting hundreds of lives at risk.

Amid days of hospitals issuing warnings over their low oxygen supplies, some relatives of patients turned to sourcing oxygen themselves.

One man told NDTV he had stood in a long queue to fill a 10-litre oxygen cylinder for his 65-year-old father who was in Pentamed hospital in Delhi. Another relative said his brother had been in hospital for 10 days and the family was sourcing oxygen itself.

A thriving black market has also emerged for oxygen and Remdesivir, with the cylinders and injections selling for exorbitant prices. Over the weekend, three men were arrested for attempting to sell Remdesivir injections for 40,000 rupees (£384) each.

Lockdown in Delhi has now been extended until 3 May. Cases continued to rise across the country and on Sunday the southern city of Bengaluru became the first city after Delhi to record over 20,000 new Covid-19 cases in a single day.

The United States on Sunday led international pledges of support for India as the country grappled with worsening crisis. Joe Biden said the US was “determined to help India in its time of need,” immediately making available supplies of vaccine-production material, therapeutics, tests, ventilators and protective equipment.

“The United States has identified sources of specific raw material urgently required for Indian manufacture of the Covishield vaccine,” a White House statement said, referring to the India-produced version of the AstraZeneca shot.

But it did not mention whether the US would send millions of surplus AstraZeneca vaccine doses to India, after top US pandemic adviser Anthony Fauci said on Sunday that would be considered.

The UK announced it had dispatched ventilators and oxygen to Delhi and France and Germany were set to send much-needed oxygen to the countries in the coming days.

Pakistan, a traditional foe of India, offered medical equipment and supplies after the prime minister, Imran Khan, tweeted prayers for a “speedy recovery”.

In the Indian capital, more than a quarter of people tested for the virus on Sunday were positive.

The prime minister, Narendra Modi, said that the country had been shaken by a “storm” as he called on people to get vaccinated and not “get swayed by any rumour about the vaccines”.