The creative experiences revelling our nostalgia for planes 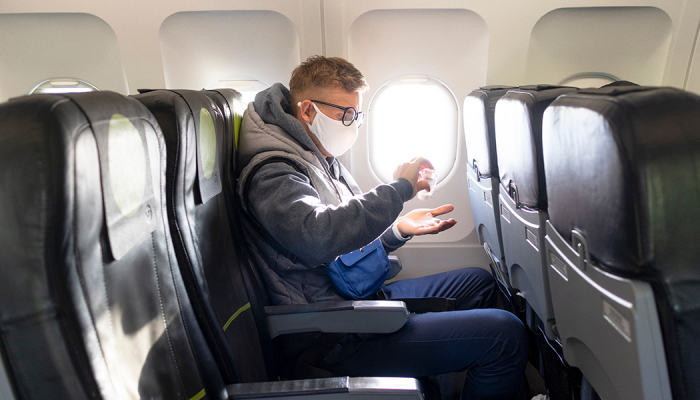 In a year of travel restrictions, aviation-related experiences have become a proxy for the freedoms and frivolities of our pre-pandemic lives.

Karyn Thomas hasn’t set foot outside Australia since October 2019, but she has chased the vivid green glow of the Southern Lights through the skies just north of Antarctica. That’s because the avid traveller was on the first-ever Aurora Australis flight earlier this month, organised by the company Chimu Adventures, which chartered a Qantas Dreamliner for an adventure that began and ended at Sydney Airport.

“Arriving at the airport late in the afternoon with bags packed was very exciting,” says Thomas, a keen photographer. “Getting on the plane you had the pillow, the blankets and the snack packs, so it did bring back memories of international travel and the excitement. Everyone felt like they were going somewhere special – the same as going overseas.”

Australia’s borders have been closed for more than a year because of the pandemic (this week it opened a travel ‘bubble’ with New Zealand), so the 10-hour trip offered the kind of plane adventure that is otherwise inaccessible at the moment. It’s one of several such experiences that have become popular over the past year. When Qantas offered a seven-hour ‘flight to nowhere’ in October out of Sydney that flew passengers over the Outback and Great Barrier Reef, seats reportedly sold out in fewer than 10 minutes. Other airlines have launched pop-up restaurants inside jumbo jets, tours of crew training facilities and at-home delivery of in-flight meals – all of which have become hot-ticket items even as the airline industry deals with its worst-ever crisis.

In a year of travel restrictions and cancelled plans, these kinds of aviation-related experiences seem to have become a proxy for the freedoms and frivolities of our pre-pandemic lives. And for the airlines, these new creative endeavours have helped keep brands in the public eye – and remind some of us of the excitement of flying at a time when we feel more grounded than ever.

The rise of airline experiences

Niche plane experiences actually pre-date the pandemic. In 2017, Tokyo-based entertainment company First Airlines began offering faux flights in which visitors entered a mock plane, settled into a fake first-class seat and used VR goggles to journey around the world while enjoying “in-flight” meals. Bookings were reportedly up 50% last year, but there’s now competition from real airlines that have branched out in imaginative ways.

Like Qantas, Royal Brunei Airlines and Taiwan’s EVA Air have offered ‘flights to nowhere’. Singapore Airlines initially planned one, too, but dropped the idea amid criticism over its environmental impact. It then launched a pop-up restaurant on A380 double-decker superjumbos parked at Changi Airport, which ran for two weekends in October with meals costing up to S$600 ($450, £325). It also ran tours of its training facilities last year and is currently operating an at-home meal delivery service that has received nearly 1,500 orders (each of which is intended for two people) since 5 October.

"With the Covid-19 pandemic drastically reducing the number of flights operated by the SIA Group, we created unique activities that would allow us to engage with our fans and customers,” says Lee Lik Hsin, Executive VP-Commercial at Singapore Airlines. This remains the primary goal, he adds, because while these activities have brought in a bit of much-needed cash, “they will not make up for the significant drop in airline revenue”.

Japan’s All Nippon Airways (ANA) has experimented in a similar way; it ran a 1.5-hour Hawaii-themed sightseeing 'flight to nowhere’ in August; has sold 34,000 food sets for at-home dining; and has a new restaurant on a Boeing 777 at Tokyo’s Haneda Airport, with meals that cost up to ¥59,800 ($550, £395) in “first-class”. Ryu Arashi, manager of corporate communications for ANA, explains that these kinds of activities have offered “new opportunities to generate revenue with the assets we possess, and at the same time, these ideas have been a great way to communicate with our customers”.

Milena Nikolova, author of Behavioural Economics for Tourism, sees these new experiences as a clever way to keep brands alive and top of mind. “A crisis is actually a good time to be super smart about your marketing and maintain visibility,” she says. “By finding a creative way to adapt, these airlines can work on their brand identity, which is going to be important when the market recovers because the competition will be fierce.”

The experiences the airlines are offering play into nostalgia customers may be feeling about the fact that they can’t currently travel, she adds. “This is, from a psychological point of view, a smart thing [for airlines] to do.”

‘A tangible link to the before times’

British Airways, Finnair and El Al Israel Airlines have also offered some form of meal-delivery during the pandemic, but the majority of these new airline experiences have been launched in the Asia-Pacific region.

Lower Covid-19 caseloads and stricter border closures could partly explain why, but perceptions of local airlines may also play a role. Residents of large nations such as the United States, which has nearly a dozen major carriers, tend to have far less affection for their airlines, says Henry Harteveldt, travel industry analyst at Atmosphere Research Group, but in some Asia-Pacific nations the situation is different.

“I think what’s important to understand is that, in many countries, airlines are a source of pride,” he explains, adding that to work for Asia’s top carriers is considered a very prestigious job. Flying in a premium cabin is also a fairly luxurious experience, with food so well-received that some regional airlines even publish their own cookbooks.

“Flag carriers such as Singapore Airlines or Thai Airways are still regarded with a lot of respect and are viewed as an extension of the country,” notes Harteveldt. “They’re a bridge from that country to other parts of the world,” which is why loyal customers have been so attracted to these novel experiences.

And of course, while there will always be aviation enthusiasts who just really like planes, there are understandable psychological reasons why a broader range of people might want to embrace any kind of travel-related activity they can right now. “[Planes] represent the freedom to explore, the freedom to conduct your business and the freedom from being bound to the Earth,” says Harteveldt. “They’re a tangible link to the before times.”

Nikolova, the behavioural economics expert, agrees. “When you think about it, planes are probably the crappiest part of the trip,” she says. “It’s just that they are an accessible proxy for the sense of being free and the sense of being able to go places.”

Because many of us can’t – or won’t – fly at the moment, Nikolova says we may be temporarily romanticising the experience – and, as a result, some people are embracing activities that replicate parts of it.

But she doesn’t believe that these activities will last long after the pandemic subsides, or that they’ll feed into a renewed love affair with flying. She suspects that while we’ll probably enjoy our first few post-pandemic flights, this feeling will wear off quickly as new hygiene norms radically alter the comfort of the experience in the same way new security norms did after the 9/11 attacks.

Yet, while we’re grounded, a big-ticket experience on a plane or even a compact meal served in an aluminium tray has proved to be a rewarding way for some people to scratch the travel itch – or indulge in a little escapism.

Thomas says that everyone on her aurora flight from Sydney “was excited to be on a holiday, even though it was only 10 hours”. Sure, they may have taken off and landed at the same airport. “But it felt like we’d gone away and had this massive adventure.”