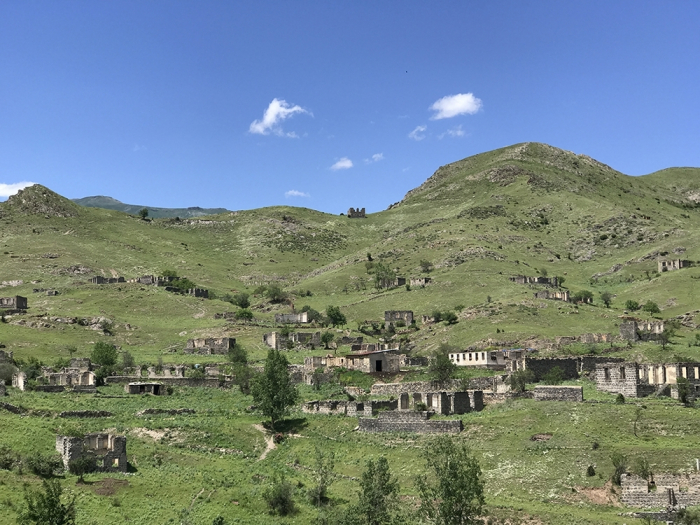 Proponents of disability, disharmony, disorientation and destruction have once again started their doctrines of “end game” in the South Caucasus South Region (SCR) due to which infant peace agreement between Azerbaijan and Armenia has again in the “line of fire”. Armenian cross border shelling has now drastically increased which is not a good omen for the peace agreement.

Even supporters and guarantors of its peace agreement i.e. Russia and Turkey are not eased to maintain peace and stability in the SCR. Russian President Putin made a call to the incumbent Armenian president and asked for complete “restrain” for the maintenance of the status quo.

It seems that “Pariah Theory” is getting momentum and Armenia has started a new wave of “hybrid war” against Azerbaijan and Turkey now by “twisting”, “distorting” and “manipulating” the historic facts ultimately projecting itself a victim of Turkish’s Ottoman Empire. It is actually “Lie of the Century”.

Unfortunately, Armenia’s diaspora communities with the help of its Western lobbyists, separatists groups, radical elements and secrete alliance with its own “Declining State” started a new game of dissemination of propaganda and falsified news to project the so-called “Armenian Genocide” as a reality. Moreover, US President’s intention to recognize Armenia Genocide as reality has further put the regional stability and harmony at stake in which Azerbaijan and Turkey are not read to compromise or bow.

Landmines implanted by fascist Armenia in the newly liberated Nagorno-Karabakh and its adjacent areas of Fuzuli, Jabrayil, Zangilan, Qubadli, and Shusha have become a killing machine due to which process of infrastructural development and rehabilitation process is being cautiously pursued.

The government of Azerbaijan pleaded to Minsk Group and other international organizations, community and power brokers to ask Armenia to share the map of landmines but still no response from the belligerent, another side. It is a severe violation of international law, norms and protocols which clearly shows Armenia anti-humanity, cultural traditions and governance.

Rather it had been pursuing systematic ethnic cleansing and genocide against innocuous people of Azerbaijan and other local communities comprising of Christians, Jews and Ukrainians for the last so many centuries. In the battle of ethnic cleansing and series of genocides millions of people of Azerbaijan were saline and slaughtered and ultimately were displaced from their native homes, lands and properties.

Even basic nature and environment had has been at the receiving end of Armenia anti-nature policies. Green has been converted into the red zone of climate change. Rivers have been polluted with acidic wastages. Biodiversity of nature has been blasted and thus committed serious crimes against humanity and nature alike.

The soil of the newly liberated lands has been made barren due to ill intentions of Armenia. Libraries have been burnt. Houses and homes have been easy prey of the horrendous crimes of Armenia and its martial groups. Even places of religious faiths and rituals have been destructed and demolished which shows so called Armenian respect towards other religions. Mosques have been used as piggery houses.

The new start of the hybrid war against Azerbaijan and Turkey by Armenia has lessened the chances of any grand regional reconciliation in the near future. Armenian mass media campaign “Armenia Genocide” is actually an attempt to play with the fire. Ashes of history will achieve nothing but further confrontation in the SCR and Armenia would be on the losing side.

It fears that political juggling from the jungle of misdeeds, misadventures, miscalculations, misinterpretations and miscarriages of the history and past may expose the ugly fascist face of Armenia to the so-called modern world of today. So just behave because the purpose of escalating tension initiated by Armenia has a certain political interest.

Armenian claims on the 1915 events are far away from the friendly cooperation and reality. In the past on numerous occasion successive Turkish government offered to open archives since Turgut Ozal’s presidency but Armenia constantly refused and continues politicizing of the 24 April events, as it was a political issue as it started more than a hundred years ago.

Many prominent international scholars and authors like Guenter Lewy in his book entitled “The Armenian massacres in Ottoman Turkey – A disputed genocide” put blame on Armenian Hunchakian Revolutionary Party conspiratorial schemes and sabotage activities for the incidents of 1915. They started political terror as a means of eliminating opponents, spies and informers. It proved counterproductive and the Empire took appropriate measures to curb miscreant elements.

Even British writer C.F. Dixon-Johnson in his book entitled “The Armenians” published in 1916 held responsible Armenian Revolutionary Societies (ARSs) for the events of 1915 and indulged in organizing armed attack and political terrorist actions against Turks, field-officers in Adana, Marash, Chukarhissar, Malatia and other regions in the 1890s.

He underlined that having gained a victory of some importance, the Armenian force proceeded to the Kertul district, where they plundered and sucked several Turkish villages, eventually seizing Anderim where they burnt the Konak. On their way back to Zeitun they committed some most disgraceful murders at Chukarhissar. Ultimately massive massacre of ARSs forced the Empire to control this widespread plundering, killings and discrimination and saved the population from the hands of barbarians Armenians.

Moreover, American journalist and a special correspondent in Ottoman Empire during 1914, Sidney Whitman emphasized in his book entitled “Turkish Memories” negated the tall claims of so-called genocide of Armenia and upheld that if the Turk were a fanatical prosecutor of all persons professing another faith than its own, how is it that for centuries Jews, Roman Catholic and Greek Christians have been allowed the free exercise of their religion in all parts of the Turkish Empire, and that Protestant missionaries of many sects have not interfered within that country. Does not all this tend to prove that the Armenian trouble is a political and not a religious one?

President Recep Tayyip Erdogan assured to continue to defend the truth against events of 1915. Speaking at a meeting with Turkey’s High Advisory Board, Erdogan once again made clear Turkey’s stance on the 1915 events. Turkey objects to presenting the 1915 incidents as “genocide,” rather than calling them a tragedy.

A Russian historian has said “Armenians do not have a valid source to verify its propaganda term (genocide) with historical and legal documents”, stressing that the claims of the 1915 events are fictional.

Oleg Kuznetsov, the author of History of Transnational Armenian Terror in the 20th Century having vast experience of scientific research papers upheld that the Armenian gangs continued their activities against the Ottoman Empire during this period.

He underlined that it is a fantasy to say that the Ottoman actions against the Armenians in 1915 were extraordinary.

He pointed out that various measures were taken for the security of the army in the countries participating in World War I, exemplifying that the Germans and Jews were exiled in the Russian Tsarism.

He pinpointed that all these were done to prevent Armenians from taking the side of the enemy and to ensure the security of the army. He concluded that the so-called Armenian genocide claims are nothing but fiction. He blamed the Armenian revolutionary Dashnak Party in Tbilisi during 1890 played havocs and was responsible for the Ottoman Empire measures to control this widespread loot, slaughter and discrimination of Armenia against harmless local communities.

He pointed out that claiming the events of 1915 as genocide is a product of geopolitical games. He stressed that genocide allegations were put forward after Turkey became a member of NATO in 1952.

Turkey’s position on the events of 1915 is that the deaths of Armenians in eastern Anatolia took place when some sided with invading Russians and revolted against Ottoman forces. A subsequent relocation of Armenians resulted in numerous casualties.

Turkey objects to the presentation of the incidents as “genocide,” describing them as a tragedy in which both sides suffered casualties.

While giving an interview to Russia 24 TV Patriarch of Moscow Kirill projected that no one destroyed Christian minorities in Ottoman Empire.

On his part, former military attache of the Turkish Embassy in Azerbaijan, General Yucel Karauz in his interview with AzVision.az exposed that there has been no “Armenian genocide” in history and no legal or historical facts confirming these allegations. He presented a counter-narrative of the deportation of millions of Azerbaijani people in the Caucasus and the Khojaly massacre.

He cited that the “Harbord” report made during the presidency of President Woodrow Wilson found that the allegations about the so-called “Armenian genocide” were not true.

Being a prominent regional expert of Azerbaijan & the South Caucasus I strongly reject fabricated historic notions of Armenia about so-called genocide and term it untrue, unreal and totally false.

Since Armenia has already instigated his people by launching a new complex and complicated hybrid war against Azerbaijan and Turkey it is high time to reactivate concrete diplomatic efforts to develop and disseminate counter national narratives highlighting Armenian centuries-long ethnic cleansing and series of genocides against harmless Azerbaijan people and local communities alike. Certain media campaigns must be initiated to mitigate the onslaught of Armenian propaganda about its so-called genocide in the past.

The governments of Azerbaijan and Turkey should jointly prepare a common strategy to highlight the horrible follies, heinous crimes against humanity and horrendous state sponsorship of Armenia against the peace-loving people of Azerbaijan and other local communities in the region as well as international media.

The end game in South Caucasus is restarted with the hope that Azerbaijan and Turkey will be at the receiving end. It fears that the economic comparative advantages of Azerbaijan and Turkey will be marginalized. Their social cohesion will be sabotaged. Their political unity will be destroyed. The genie of Pariah Theory has now come out of the bottle to perform naked dance against humanity and harmony which should be dealt with irony hands.

The burning of national flags of Azerbaijan and Turkey clearly demonstrates the uncivilized behaviour of fascist Armenia. Starting indiscriminate shelling on some of the borders also depicts the irresponsible and inhumane conduct of Armenia.

Lessons of history reveal that Armenian propaganda remained unsuccessful and Azerbaijan’s superior human survival efforts, immoral traits and true spirits could not be swayed through conspiracies, conflicts and confrontations. Despite all its schemes and secretive activities, Armenia could not achieve victory against the resilient people of Azerbaijan which possess the 80 per cent GDP of the South Caucasus.

Dr Mehmood-ul-Hassan Khan is the Director, Geopolitics/Economics Member Board of Experts at CGSS.