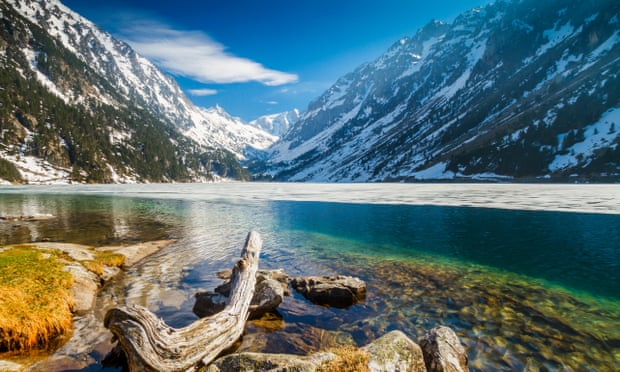 A tenth of the world’s mountain glacier ice will have melted by the middle of this century even if humanity meets the goals of the Paris climate agreement, according to figures compiled exclusively for the Guardian.

The loss is equivalent to more than 13,200 cubic kilometres of water – enough to fill Lake Superior, or more than 10m Wembley Stadiums – with knock-on effects on highly populated river deltas, wildlife habitats and sea levels.

In some particularly hard-hit areas, including central Europe, North America and low latitudes, glacier mass is expected to decline by more than half.

Scientists said the overwhelming bulk of this melt-off, which does not include Greenland or Antarctica, is unavoidable because it has been locked in by the global heating caused by humans in recent years.

However, they say the actions governments take today – including the recent announcements of more ambitious emissions-cutting goals by the US, the UK and others – can make a big difference to the landscape in the second half of this century.

“What we see in the mountains now was caused by greenhouse gases two or three decades ago,” said the glaciologist Ben Marzeion from the University of Bremen. “In one way, we could see it as a doomsday because it is already too late to stop many glaciers melting. But it is also important that people are aware of how decisions taken now can affect how our world will look two or three generations from now.”

Marzeion extracted the data from a synthesis last year of more than 100 computer models generated by research institutes around the world.

The compiled results are considered the most accurate estimate yet of how mountains will lose their white snow-caps and blue ice-rivers.

Between 2021 and 2050, Marzeion calculated the average mass loss over the various scenarios is 13,200 Gt. This is equivalent to melting almost five Olympic swimming pools of ice every second over the next 30 years.

Aggressive emissions cuts would barely slow this. The difference between the best and worst-case scenarios was less than 20%. The remaining 80% is already locked in.

That contrasts with projections for the second half of the century, when the decisions taken now will make a huge difference. In a low-emissions scenario, current glacier mass is projected to diminish by about 18% by 2100, which would be a slowdown. By contrast, in a high-emissions scenario, the loss would accelerate to reach 36%.

This has multiple consequences. Mountain glacier melt contributes more than a third of sea-level rise, a higher contribution than the Antarctic, according to the latest European State of the Climate Report, which was released last week. This is steadily raising the risk of floods and inundations along coastal regions and rivers.

Depending on how quickly emissions can be cut, the extra runoff is likely to add 79-159mm to sea levels by 2100, according to the synthesis paper.

At a local and regional level, it can also reduce the stability of river systems. On a seasonal level, Alpine glaciers help to regulate water supply by storing precipitation in winter and releasing it in summer.

But as they melt away over decades due to global heating, more downstream areas will first experience a water boom, then a bust. Previous studies suggest 1.9 billion people are at risk of mountain water shortages, most of them in China and India.

The urgency varies according to altitude, ice thickness, weather patterns and a host of other factors. Lower mountain ranges, such as the European Alps or the Pyrenees, are expected to be among the worst affected. In Switzerland and Italy, there are already cases of famous glaciers retreating rapidly or melting completely.

Scientists predict there could even be more glaciers in the world by 2050 because many of the current big bodies of ice will split into smaller fragments, but they stress the number and area of glaciers is less important than the trends affecting mass and volume over decades.

“It is very important to think long term,” said Samuel Nussbaumer of the World Glacier Monitoring Service and the University of Zurich. “Glaciers have a long memory.”