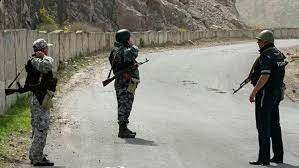 Tashiyev said that following the negotiations, a protocol consisting of 4 points was adopted.

“This protocol meets the interests of both countries. Our peoples are going through difficult times. The situation was a tragedy for both countries. It was difficult for us to carry out the work, but, nevertheless, on the instructions of the heads of our states, we decided to completely stop firing and withdraw all military formations to places of their permanent deployment,” he said. "From now on, through the efforts of our respected neighbors and our own efforts, peace and tranquility will come to our countries, especially to the border areas.”

The head of the State Committee for National Security of Tajikistan, Saimumin Yatimov, said that during the negotiations, a practical conversation took place, initiated by the heads of states.

“The fact that there was a tragedy in the border areas should never be repeated, because our peoples live in this area, they are friendly and have no claims towards each other. We, politicians, must resolve all issues and must give our peoples the opportunity to live in traditional peace and friendship” Yatimov noted.

“An agreement in principle was reached on achieving peace and stability at the Kyrgyz-Tajik border. I am convinced that we will be able to do this and will resolve it as soon as possible, and our peoples, as always, will live in friendship and mutual understanding,” he added.

The situation on the border of Kyrgyzstan and Tajikistan escalated on April 28 after the citizens of Tajikistan began to install surveillance cameras at the water intake in the village of Kok-Tash, Batken region (Kyrgyzstan).

A ceasefire was established between the countries from 17.00 (GMT +3). The two sides agreed to jointly patrol border areas to avoid further clashes. Both Kyrgyzstan and Tajikistan reported dead and injured as a result of the armed clashes.