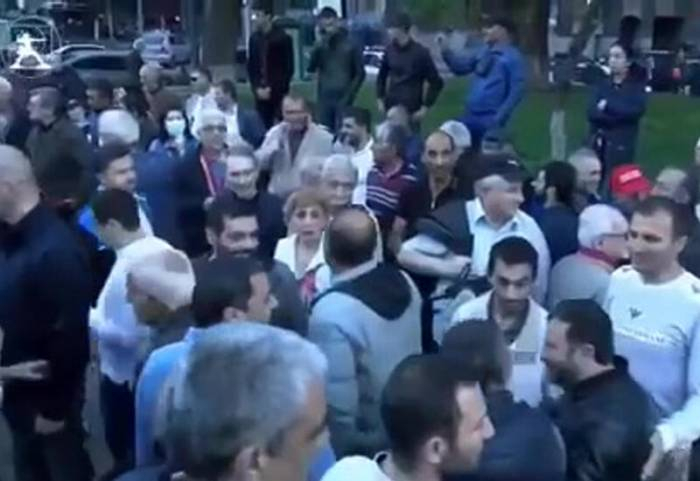 Russian Foreign Minister Sergey Lavrov’s visit to Armenia clearly showed in which direction "the wind is blowing" in Yerevan. It becomes clear that very specific anti-Russian sentiments appear in an allied Armenia.

Action of 'Sasna Tsrer' movement against Lavrov's arrival in the center of Yerevan is a very clear indicator of Armenian radicalism towards Moscow. Besides, currently Armenian separatism is actively developing in the south of Russia - apparently, Armenian radicalism is in full swing.

The radical Armenian nationalists of 'Sasna Tsrer' have staged another anti-Russian rally in the center of Yerevan. Video posted on the internet shows Armenians gathered in the streets chanting insults in Russian and Armenian against Russian Foreign Minister Sergey Lavrov. It is the type of "Armenian thanks" presented to Russia by Armenian society. It is quite understandable that now Pashinyan's government is practically unable to control these actions, even if they turned into carnage - Vovaevich is now very afraid to enter into an open confrontation with the opposition, especially on the eve of the elections.

Meanwhile, Jirair Sefilian, the leader of Sasna Tsrer is very actively speaking out against Russia and peace in the Caucasus. And since life in Armenia is not improving, support for Armenian radicalism in poor Armenian society is growing.

His aggressive statements against the Russian military base in Armenia are very well known.

"We didn't come here to drive out Russian forces ... they will leave without us, we must prepare for this day. We will not chase them, they will leave themselves. Dear friends, they will leave. We must now prepare to fill this void. Our country should not sink into chaos when they leave. Armenia will have to find new allies," he said.

This kind of anti-Russian rhetoric is becoming increasingly popular in Armenia with the commitment of Franco-American influence, pushed by Sefilian.

Armenian radicals became more active in the south of Russia.

On May 1, the Armenian headquarters in Krasnodar opened its channels on the video hosting youtube and rutube and published a very ambiguous text.

"May 1 can be considered a real Armenian holiday, because the love and ability to work are indispensable characteristics of every Armenian, and spring ... we will be sure that our spring is yet to come! The Regional branch of the Union of Armenians of Russia (RO SAR) in the Krasnodar territory gives a small gift: the channels of the organization recently opened on youtube and rutube", said the message.

Recently, the official press organ of the administration of the Krasnodar territory 'Kubanskie Novosti' has published an interview with the head of the Regional branch of the Union of Armenians of Russia in the Krasnodar Territory Airapetyan. Airapetyan traditionally developed Armenian nationalist propaganda on the pages of the Russian edition, told "the history of the Armenian colony of Russia", recalling that in 1839 Armenians allegedly founded Armavir, so named in honor of the eponymous "ancient capital of Armenia". Well, it's familiar-this is how, as a rule, Armenian methods of "seizing" a foreign territory are used.

Well, the most important and dangerous thing is that Armenians continue to talk insistently about the creation of the Krasnodar Armenian Republic: any resident of Krasnodar has heard such conversations somewhere on the street or on Internet. This spring, Armenian radicalism has turned into a real virus for the "big brother", and I think Moscow has already felt it.