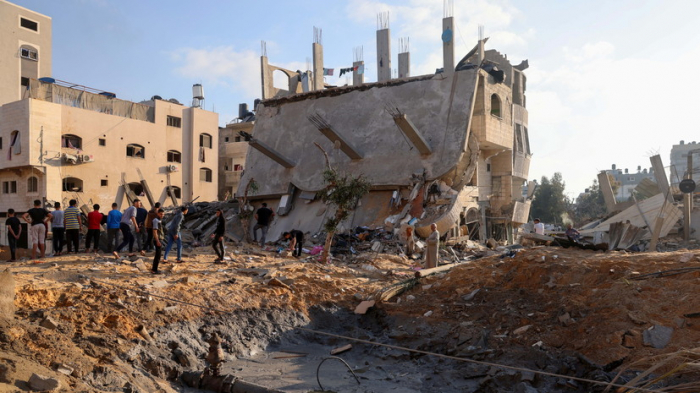 As the Israeli military intensifies its strike on Hamas, plans for a possible ground invasion of the Gaza Strip will be presented to IDF Chief of Staff Lt.-Gen. Aviv Kohavi for approval later on Thursday.

Speaking to reporters, IDF Spokesperson Brig.-Gen. Hidai Zilberman said that the plans are being put together by the Gaza Division and Southern Command and will then be given to Israel’s political echelon for approval.

The IDF has hit government targets and banks as well senior leaders in the terror organization.

“The organization is losing everything,” Zilberman told reporters on Thursday morning.

"Tonight we started destroying government targets in the Gaza Strip, such as central banks and internal security buildings. Hamas is beginning to discover cracks and there is pressure in the organization, even among the Gaza public who is losing its patience and sees these ruins on the eve of the holiday [of Eid al-Fitr]," he said.

Over 650 targets belonging to Hamas have been struck since the beginning of Operation Guardian of the Walls, such as those belonging to their police, Interior Ministry, banks, homes of commanders including that of the battalion commander of Khan Younis, a naval commando unit and a defensive tunnel inside a school.

Three high-rise buildings were also destroyed by Israel Air Force airstrikes and some 60 Hamas operatives have been killed, including 10 senior commanders.

According to Zilberman, all options remain on the table and additional ground troops have been redeployed to the border ahead of a possible ground operation, including from the Paratroopers Brigade, Golani Infantry Brigade and 7th Armored Brigade.

On Wednesday night, Prime Minister Benjamin Netanyahu informed the security cabinet that Israel officially rejected a Hamas proposal for a ceasefire and Kohavi held a call with General Mark Milley, Chairman of the US Joint Chiefs of Staff to update him on the operation.

Throughout the night, incoming-rocket sirens sounded throughout the country across the Center and South, as well as in northern Israel – as far as the Galilee region, a rare occurrence. According to Zilberman, those sirens were false alarms.

Several rockets made direct hits, including in Petah Tikva and Rishon Lezion where a part of a rocket landed inside a home; no one was injured.
Starting on Thursday morning, Ben-Gurion Airport began rerouting inbound flights to the Ramon International Airport in southern Israel. Departing flights will still leave from Ben-Gurion.

Israel's security cabinet on Wednesday night approved Kohavi's recommendation to escalate retaliatory airstrikes into the Gaza Strip. Defense Minister Benny Gantz briefed members of the Knesset as the prime minister declared that Israel will not accept a ceasefire with Hamas and Palestinian Islamic Jihad.

An IDF soldier was killed by an anti-tank missile early Wednesday morning and a five-year-old boy was killed later in the day when a rocket scored a direct hit on his family's apartment building in Sderot. More than 1,200 rockets have been fired into Israel since the fighting began on Monday.

A rocket barrage was launched toward central Israel on Wednesday evening and sirens sounded in Tel Aviv and throughout the South as Hamas launched the rockets to avenge the deaths of its top commanders by Israel earlier in the day.

The rockets either fell in open areas or were intercepted by the Iron Dome missile defense system. In Ashkelon though, one of the rockets scored a direct hit on a home, causing extensive damage to one of the bedrooms. A child had been sleeping there moments earlier and was whisked to safety when the sirens sounded.

Two people were reportedly injured in a terrorist attack in the West Bank (Samaria) late Wednesday night, and the terrorist was neutralized on the spot, according to the IDF. The incident is under review.
Earlier in the day, IDF St.-Sgt. Omer Tabib was killed and three other soldiers were injured after a Hamas-fired Kornet anti-tank guided missile (ATGM) hit his jeep near the Gaza border. The attack came after a night of intense rocket barrages toward the center of the country.

The jeep, belonging to the 931st Nahal battalion, was inside the Kibbutz of Netiv Ha'asara but was at a spot where it was exposed to the ATGM when it was struck.

Netanyahu said on Wednesday afternoon: "On behalf of all Israeli citizens, I express my deepest condolences and send my condolences to the family and friends of the IDF soldier, the late Staff-Sgt. Omer Tabib, a fighter in the Nahal Brigade who fell this morning from anti-tank fire during an operation to protect the Gaza Strip.

"I send my best wishes for a speedy and complete recovery to another fighter and another officer who were injured in the attack."