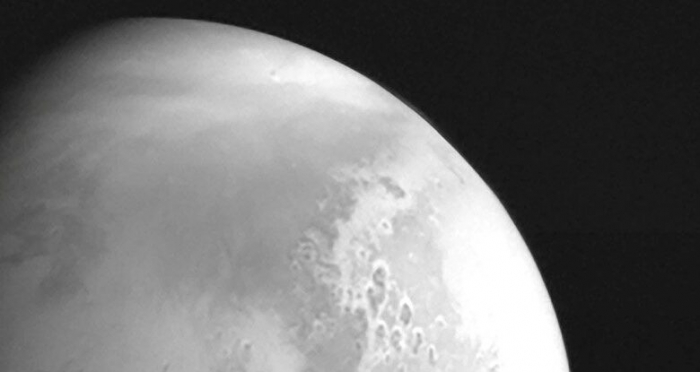 China is about to attempt its first Mars landing – a feat accomplished successfully by only half the spacecraft that have ever tried.

Tianwen-1, as the mission is called, means "questions to heaven". It aims to be the first Mars mission to send a spacecraft into the planet's orbit, drop a landing platform onto the Martian surface, and deploy a rover all in one expedition.

The first steps are complete. The mission launched in July 2020 and the spacecraft slipped into orbit around Mars in February. Now the orbiter is preparing to release a capsule carrying the lander and rover.

It must plummet through the Martian atmosphere and deploy a parachute, then release the lander, which should fire downward-facing thrusters to lower itself to the Martian surface.

If that all goes well, the Tianwen-1 lander will later deploy a two-track ramp for the six-wheeled rover to roll down onto Martian soil.

The landing attempt is scheduled for Friday at 7:11 pm ET, according to Twitter accounts that monitor China's space programs. The China National Space Administration (CNSA) has not confirmed this timing, but it previously said that it would attempt the landing – "the most challenging part of the mission" – in May.

If the Tianwen-1 lander safely touches down on Martian soil, it would be the first non-NASA Mars landing since the Soviet Union's rover touched down in 1971. Success would make China the third nation to land on Mars.

The intended landing spot is in Utopia Planitia, a vast field of ancient volcanic rock that may have extensive reserves of water ice beneath its surface. If space agencies like NASA someday send humans to Mars, water would be a crucial resource because it can both sustain astronauts and get broken down into hydrogen and oxygen for rocket fuel.

It's unlikely that Mars-bound spaceships could carry enough water, oxygen, and hydrogen for the entire journey there and back.

China's 240 kg (530 pounds), solar-powered rover is set to explore the region and study its water ice. The mission is also intended to help China prepare for a future attempt to return Martian rocks or dirt to Earth in the late 2020s.

7 minutes of terror to land on Mars
When the time comes, China's gumdrop-shaped landing capsule will separate from the Tianwen-1 orbiter and fall towards Mars.

The capsule must protect the robots inside as it plummets through the Martian atmosphere at temperatures exceeding 2,000 degrees Fahrenheit (1000 degrees Celsius). A supersonic parachute must deploy to slow the fall.

As the lander nears its destination, thrusters have to fire downwards to help it decelerate. Then it should lower itself to the surface on a set of legs to absorb the impact.

As with any Mars landing, the spacecraft must conduct this entire process autonomously. Because it takes at least eight minutes for a signal to travel from Mars to Earth, and vice versa, mission controllers can't communicate with the spacecraft in real time.

When they receive the signal that the capsule is falling towards Mars, it will already be on the surface, dead or alive.

That's why aerospace engineers refer to this part of a Mars mission as "seven minutes of terror."

"I don't think I'm exaggerating when I say that entry, descent, and landing is the most critical and most dangerous part of a mission," Allen Chen, who leads that process for Perseverance at NASA's Jet Propulsion Laboratory, said in a press briefing before its landing.

Meet Zhurong: the 90-day Mars rover
The rover is called Zhurong, named for ancient Chinese mythology's god of fire, according to the CNSA. The process of deploying the ramp for the rover and getting it onto Mars' surface could take more than a week, journalist Andrew Jones reported for IEEE Spectrum.

Zhurong's name "echoes with the Chinese name of the red planet, Huoxing (meaning the planet of fire)," according to a CNSA statement. "Fire brought warmth and brightness to the ancestors of humankind, and fire lit up human civilization. Naming China's first Mars rover after the god of fire signifies igniting the flame of China's planetary exploration."

Zhurong is set to explore Utopia Planitia for 90 Martian days, according to a journal article by scientists on the Tianwen-1 team.

Meanwhile, the orbiter will continue circling the red planet for one Martian year (two Earth years), relaying data to Earth and taking photos. Its main goal, according to the scientists, is to "perform a global and extensive survey of the entire planet."

This will involve charting Mars' geology, surveying its climate, and measuring its electromagnetic and gravitational fields.