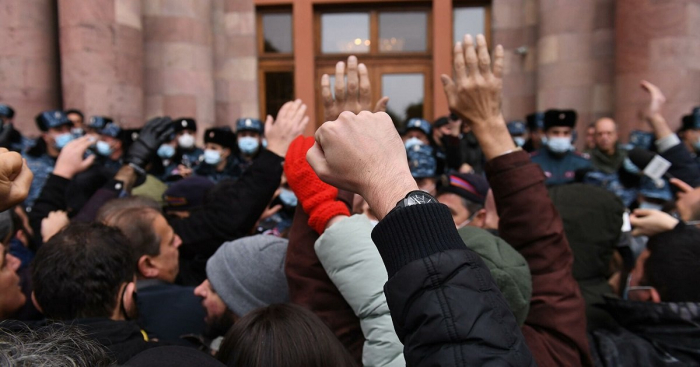 As early parliamentary elections approach in Armenia, the voices of revanchist forces are still being heard in Armenia, who oppose the idea of a long-term peace with Azerbaijan within the scope of universally recognized state borders. It is clear that Armenia will further encounter economic stagnation and poverty in the country without the normalization of relations with Baku and the opening of transport corridors. Indeed, it happens today: the increase in food prices has exceeded the rise in average salary several times. Apart from that, the prices of goods included in the minimum life support budget calculated by the State Committee of Armenia significantly forereached the considerable inflation in annual calculation.

Last year's military defeat deprived the country of access to the mineral, agricultural and other resources of the liberated Karabakh region. Besides, the low level of vaccination, which reduces the chances of getting out of the pandemic crisis, as well as financial and transport problems, has led to a decline in GDP of Armenia. The collapse of the national currency in Armenia resulted in mass unemployment and poverty.

While Armenian politicians are looking for the culprits, ordinary citizens cannot make ends meet because of the rise in the price of essential goods.

So, the annual inflation for the first quarter of this year increased to 5.8%. In April, it increased to 6.2%, maintaining an upward trend in May. According to official statistics, a record (8.3%) rise in prices for basic food products was registered in Armenia by the end of April. On an annualized basis, vegetable oil rose in price by 73.5%, sugar - 41%, eggs - 55.7%, fruits - 10.4%; prices for fresh vegetables, flour products, etc. rose significantly.

It is not possible to reduce prices in the local market because of the embargo imposed by Yerevan on the supply of Turkish goods to the country, including inexpensive supplies. Besides, the current situation is associated not only with fluctuations in world prices, the so-called imported inflation, but also with the high level of monopolization of the local market. There are about a dozen importing wholesalers of food products in Armenia, who are also engaged in their retail sale through trade networks. Thus, the entire market chain consists of a group of companies that receive excess profit.

The food crisis is also related to the fact that all these years Armenia followed the approach that it is easier and cheaper to import than to produce food in the country. For many years, the Armenian authorities ignored the agricultural sector, didn’t finance this field. Therefore, today this approach has led to the collapse of food security.

"In Armenia, you can buy less for a salary compared to previous time due to the recent increase in prices. Even the necessary living wage is not available to many. The country does not adjust salaries to the prices of the necessary goods," the Armenian media reported on Monday, referring to the vice chairman of the Confederation of Trade Unions of Armenia, Boris Kharatyan. He also stated that the Labor Code and the special law "On the minimum consumer basket and the minimum budget for life support" adopted in 2004, necessitates the indexation of salaries in compliance with inflation. However, this requirement has never been met over the past 17 years. Methods for calculating indexation have not been developed. And all these nonworking regulatory documents are just another falsehood.

Looking at the publications in the media and social networks of Armenia, they are not inclined to make optimistic forecasts about the imminent exit of the national economy from the continuous crisis and a significant progress in terms of the situation of the population. However, such prospects may emerge if Yerevan agrees to normalize relations with Azerbaijan and Turkey, abandoning revanchist rhetoric and territorial claims to its neighbors. In this case, the restoration of transport, trade and economic cooperation will help to adjust the imbalances of the Armenian domestic market. It seems that it is exactly what the Armenian people, who are tired of defeats and poverty, need today.