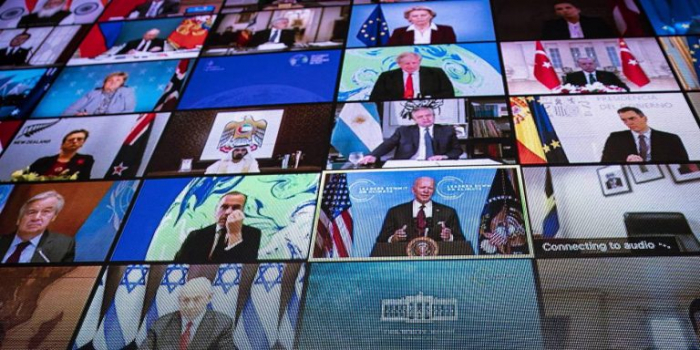 If the United States is to protect and rejuvenate its economic foundations and approach autocracies like China and Russia from a position of strength, its strategy cannot be merely trans-Pacific or transatlantic. Instead, America must openly source its approach from across the democratic world.

The liberal international order remains trapped in the twentieth century. As autocracies like China and Russia increasingly develop spheres of cooperation, the United States is responding by building or strengthening regional groupings of its own, from NATO to the Indo-Pacific Quad (the US, Japan, Australia, and India). But America should instead take a global approach that focuses on values and visions rather than on countries.

Unfortunately, America’s post-1945 international frameworks are ill-suited to fostering a common conversation among liberal societies. The G7, NATO, the European Union, and the Quad are too regionally disparate to forge a strong global response.

Consider the issue of semiconductors. The most advanced play a foundational role in emerging technologies such as biotech, quantum computing, and artificial intelligence, and are produced almost exclusively by the US, the EU, and their Asian allies. But semiconductor manufacturers depend on a global system of talent and trade in which China is deeply embedded. No democratic forum currently exists to generate consensus on international standards, export controls, or industrial cooperation.

The US, the EU, and their democratic Asian allies, which have technologically sophisticated economies and high standards of living, together account for roughly half of global GDP. But if the US is to protect and rejuvenate its economic foundations and approach autocracies from a position of strength, its strategy cannot be merely trans-Pacific or transatlantic; it must be openly sourced from across the democratic world.

US President Joe Biden’s administration has, or at least had, a vision of global democratic cooperation, but one focused on countries more than issues. Secretary of State Antony Blinken and author and pundit Robert Kagan called in 2019 for the establishment of a “league of democracies.” Likewise, during the presidential transition, Biden announced his intention to convene a “Summit of Democracies” during his first year in office. But the administration stumbled on the rock that trips up all such efforts: the difficulty of defining who belongs to the liberal democratic club. It has thus renamed the gathering the “Summit for Democracy,” and apparently postponed it until next year.

Rather than focusing on democracy itself, the summit should emphasize the underlying values that liberal democracies cherish: an open society, the rule of law, representative government, economic opportunity, privacy, security, freedom of expression, justice, and equality.

To that end, the US should consider how to work with smaller states to convene countries in support of specific democratic norms and standards on important issues. Jared Cohen of the Council on Foreign Relations and Richard Fontaine, the CEO of the Center for a New American Security, argue that such “microlateralism,” a combination of “small-country leadership and large-state participation,” can be a “key instrument in the United States’ collective-action toolkit.”

Developing a code of best practice for open societies’ pandemic responses might be an easy starting point. Taiwan, for example, has been among the most successful in countering COVID-19, despite its proximity to the Chinese mainland and lack of vaccines. Biden’s national security adviser, Jake Sullivan, recently praised Taiwan’s handling of the pandemic, noting that the US has “a lot to learn” from the country’s ability to combat disinformation and tackle the challenges of an interconnected democratic society. The US could turn to New Zealand to lead or co-lead a gathering of states committed to developing a set of principles or a code of conduct for tackling pandemics. This could be named after the host city, like the Kyoto Protocol on climate change.

Such a forum should not be restricted to governments. Civil society, academia, industry, philanthropy, and religious organizations are all force multipliers for democratic dynamism. During the COVID-19 pandemic, institutions such as Johns Hopkins University and vaccine developers like Pfizer-BioNTech have been invaluable in immunizing society from disinformation and the virus, respectively. The vibrancy of these non-governmental actors is one of liberal democracies’ unique strengths vis-à-vis authoritarian systems.

Moreover, these gatherings could disseminate democratic best practices on combating disinformation. Estonia, which developed a multi-faceted digital approach to reinforcing its democratic institutions after a series of crippling cyberattacks in 2007, offers an excellent example of how civic tech can foster resilience to autocratic hostility. Its “digital nomad” visa has allowed citizens of countries from Canada to South Africa to work virtually in Estonia, thereby integrating further private-sector expertise and strengthening cultural ties with other open societies. Such innovative pockets of ingenuity shine a positive light on the value of human freedom and show how developing and diffusing democratic norms can offer a multi-centered model of twenty-first-century governance.

The Biden administration is currently preparing for the upcoming G7 and NATO summits, but prominent democracies such as Australia, New Zealand, India, South Africa, Taiwan, and South Korea will not be at the table (although the UK has invited some as guests to the G7 meeting). An effective mechanism for strategizing among liberal-democratic states could help America get its own house in order and provide values-based leadership on human rights, security, tech governance, supply chains, and even global corporate taxation. Emerging or at-risk democracies, seeing opportunity rather than only forced choice, will certainly take note.

US strategy for addressing authoritarian challenges should be global, not regional, plural rather than unitary, and issue-based rather than country-based. Over a century ago, following the last pandemic, America was the engine driving the creation of a new international order. Today, it must lead from the center rather than the front, side by side with many other countries, to seize a unique opportunity to update the model of a more interconnected, inclusive, and democratic global society.

Anne-Marie Slaughter, a former director of policy planning in the US State Department (2009-11), is CEO of the think tank New America, Professor Emerita of Politics and International Affairs at Princeton University, and the author of Unfinished Business: Women Men Work Family.