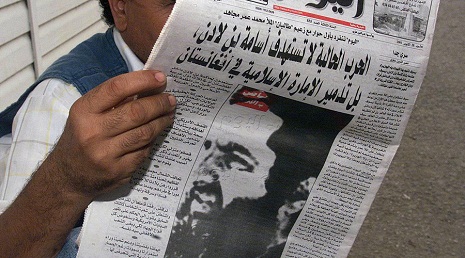 The death of the Taliban
"The government ... based on credible information, confirms that Mullah Mohammad Omar, leader of the Taliban died in April 2013 in Pakistan," the office of President Mohammad Ashraf Ghani said in a statement on Wednesday.

"The government of Afghanistan believes that grounds for the Afghan peace talks are more paved now than before, and thus calls on all armed opposition groups to seize the opportunity and join the peace process."

The statement came after media reports saying that the death of the Taliban leader has been confirmed by Pakistani authorities to Afghan government officials.

The Pakistani government said the Taliban leader died some two years ago from tuberculosis.

The information appears to be backed up by a former Afghan Taliban minister and top councilman, who spoke with the Express Tribune on condition of anonymity: “Mullah Omar died two years and four months ago, [due] to tuberculosis. He has been buried on the Afghan side of the border,” he said. “Mullah Omar’s son identified the body of his father.”

The White House believes the reports of Omar’s death to be “credible,” Reuters reported, with spokesman Eric Schultz saying the US intelligence was continuing to look into the matter.

The Afghani Khaama Press news agency reports that the issue of Mullah Omar’s possible death was discussed by the Afghan Cabinet following confirmation from Pakistani authorities.

The Afghan Taliban are not divulging any information, but have said they will release a statement in due course. The militant group’s representatives have recently been in talks with top Afghan officials for the first time in Pakistan.

This is not the first time the death of Mullah Omar has been reported.

Earlier a Taliban splinter group, the Afghanistan Islamic Movement Fidai Mahaz, announced that the Taliban leader was killed by other leaders from the faction, namely, Mullah Akhtar Muhammad Mansoor and Gul Agha. But the group’s spokesman, Qari Hamza, says the supposedly deceased leader was actually killed in July 2013. The spokesman said he has evidence of this.

Another version of events was offered by The National Directorate of Security (NDS), Afghanistan’s spy agency, which claims that Mullah Omar died last November.

Other reports indicate that following Mullah Omar’s alleged death some two years ago, the Taliban fractured into three separate factions - one backing peace talks with the Afghan government, another opposing them and the third reportedly comprised of “neutral” militant leaders. Intelligence reports in 2014 indicated that, in the event of his death, Omar had given his trusted friend Mullah Mansoor authority to take over.

But despite these rumors, a message attributed to Mullah Omar started making the rounds on July 15, ahead of the celebrations for Eid, which come at the end of the holy month of Ramadan. The message spoke in support of the peace talks with the Kabul government, adding that the objective is the “end to occupation” by foreign armed forces. However, it was only published as text on the Taliban`s website, which further fuelled speculations of Omar being dead or incapacitated.

However, the last anyone has seen of the reclusive leader was following the October 2001 invasion of Afghanistan by the United States, after Omar had joined forces with Osama Bin Laden, widely believed to be the architect behind the September 11 attacks on New York City and Washington.

The Taliban leader was born in 1959 or 1960 in a small village in Afghanistan’s south. In the early 1990s he joined the anti-government resistance movement and lost his right eye when hit by shrapnel around that time. He rose to become a leader in the hardline Islamist Taliban group, which seized power in the country in 1996. After the regime was forcefully ousted in 2001, Omar fled into hiding, but continued to coordinate militant attacks.