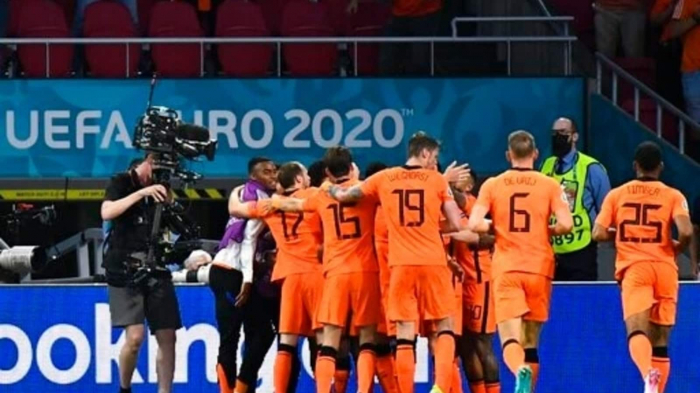 The Netherlands narrowly beat Ukraine 3-2 in a thrilling UEFA EURO 2020 Group C match Sunday in Amsterdam as Denzel Dumfries scored a late winner to get the Dutch off the hook, AzVision.az reports citing Anadolu Agency.

After a 0-0 score at the halftime break, home team the Netherlands took a quick 2-0 lead in the second half as midfielder Georginio Wijnaldum scored in the 52nd minute and forward Wout Weghorst doubled the gap for the Dutch national team in the 59th minute.

But underdogs Ukraine fought back from the 2-0 deficit to make it 2-2.

Ukrainian forward Andriy Yarmolenko's missile outside the box narrowed the gap to one in the 75th minute at the Johan Cruijff ArenA as Dutch goalkeeper Maarten Stekelenburg was unable to parry it.

But Dutch defender Dumfries saved the day for the Netherlands as the 25-year-old's header beat Ukrainian goalie Georgiy Bushchan in the 85th minute.

Netherlands secured a dramatic victory in a tough game.

Dumfries was named the man of the match.

In the next fixtures, the Netherlands will face Austria, and Ukraine will play against North Macedonia.

The Netherlands are in second in the group with three points.

Ukraine and North Macedonia are both without points.