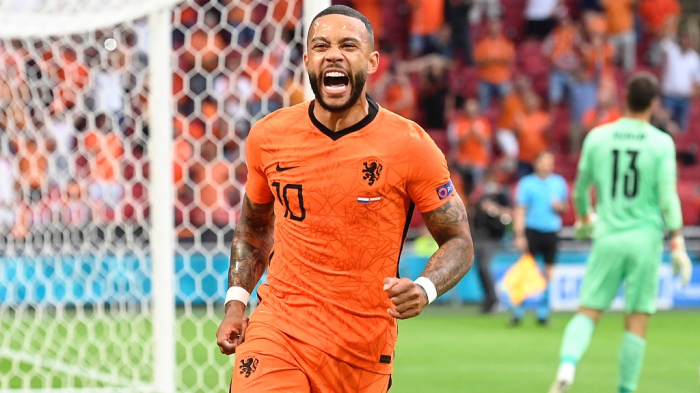 The Netherlands overpowered harmless Austria 2-0 while Belgium bounced back to see off resilient Denmark following the second round in the group stage on Thursday, AzVision.az reports citing Xinhua.

The "Elftal" romped into the last 16 after clinching a top spot finish in Group C thanks to the 2-0 victory over Austria.

The hosts broke the deadlock with eleven minutes played after great assistance of Austria defender David Alaba, who fouled Denzel Dumfries inside the box. Memphis Depay stepped up and made no mistake to put the Dutch ahead.

Austria tried to respond but was never able to cause a lot of trouble in front of the host's goal area.

Just when the visitors gained momentum in the second half, the Netherlands killed the game in ice-cold style with 67 minutes gone when substitute Donyell Malen was squared into the path of Dumfries, who tapped home at the far post.

With the second win in as many games, the Netherlands (6 points) secure a first-place finish in Group C. Ukraine (3 points) sit on the second placed followed by Austria (3 points) and winless North Macedonia (0 points).

At the other game in Group C, Ukraine keep their last 16 hopes alive after snatching a 2-1 win over resilient North Macedonia at the National Arena Bucharest.

North Macedonia was able to hold the pace with Andriy Shevchenko's side in the early stages. As the match progressed Ukraine cracked North Macedonia's twice as Andrey Yarmolenko marked the opener in the 29th minute before Roman Yaremchuk established a two-goal lead five minutes later.

However, Ukraine didn't build on their advantage but retracted with their two goals after the restart. North Macedonia made some tactical changes pulled one back through Ezgjan Alioski at the hour mark.

Ukraine had the golden chance to put the game to bed, but Ruslan Malinovsky wasted a hand ball penalty. Igor Angelovski's boys were in search for a late equalizer, yet their efforts didn't pay out as they still wait for points in Group C.

On Monday, North Macedonia clash with the Netherlands whereas Ukraine encounter Austria in an all or nothing game.

Elsewhere, Belgium sewed up their second win in Group B and booked their berth for the last 16 as well after coming from behind back to beat Denmark 2-1 at the Parken Stadium in Copenhagen.

Denmark grabbed a fairy-tale start as Yussuf Poulsen gave the home side the lead with just two minutes played. The hosts have been all over the place for the remainder of the first half and should have been two goals ahead, but Mikkel Damsgaard came only close from inside the box.

The "Red Devils" gained the upper hand after the restart and restored parity with ten minutes into the second half as Thorgan Hazard made the most of Kevin de Bruyne's assist.

Substitute De Bruyne got his name on the scoreboards and completed Belgium's comeback in the 71st minute after the attacking midfielder collected Eden Hazard's pass before drilling the winner from 20 meters past goalkeeper Kasper Schmeichel.

With the win, Belgium (6 points) defended the top spot in Group B followed by Russia (3 points), Finland (3 points) and Denmark (0 points).