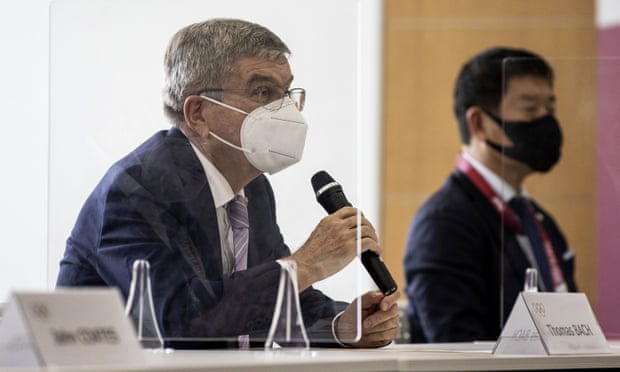 Thomas Bach’s attempts to win over the reluctant hosts of the Tokyo 2020 Games got off to an embarrassing start on Tuesday when the president of the International Olympic Committee (IOC) referred to the people of Japan as “Chinese”.

In his first public comments since arriving in Tokyo last week, Bach attempted to reassure the public that the Games would not become a coronavirus super-spreader event.

“Our common target is safe and secure Games,” he said at the start of a meeting with the head of the Tokyo 2020 organising committee, Seiko Hashimoto, and its chief executive, Toshiro Muto. “For everybody – for the athletes, for all the delegations, and most importantly also for the Chinese people … Japanese people.”

The gaffe was was not repeated by English-to-Japanese interpreters at the meeting, but reports by Japanese media triggered a backlash on social media.

Bach said the Games were the “best-ever prepared” despite the myriad logistical challenges posed by the pandemic.

“The Japanese people can have confidence in all the efforts we are undertaking to make these Games for them secure and safe, with all the intensive, most strict Covid-19 countermeasures,” he said.

“You have managed to make Tokyo the best-ever prepared city for the Olympic Games. This is even more remarkable under the difficult circumstances we all have to face. Now it’s 10 days to go to the opening ceremony. That also means there’s still a lot of work to do.”

Bach, who was until recently quarantining at his hotel, is likely to hold a meeting with the Japanese prime minister, Yoshihide Suga, on Wednesday, and to visit Hiroshima at the end of the week.

Bach and other senior IOC officials have drawn criticism for insisting the postponed Games will open on 23 July, despite rising infections and warnings by medical experts that the arrival of tens of thousands of athletes, sponsors, reporters and officials could trigger a new wave of infections.

Tokyo entered its fourth state of emergency on Monday, and is subject to measures that include an unpopular ban on serving alcohol at bars and restaurants, which must also close early. Establishments that refuse to comply can be fined.

The restrictions, which will stay in place until 22 August – a fortnight after the Olympics end – have sparked anger among businesses that say they are struggling to survive.

Bach arrived last Thursday, the day organisers announced a ban on domestic spectators at almost all Olympic venues, reversing an earlier decision to allow a limited number of people to watch live sport.

Officials are asking people to watch the Games on TV to limit opportunities for the virus to spread via people travelling to and from Olympic venues. “We would ask people to support athletes from home,” the chief cabinet secretary, Katsunobu Kato, said.

Tokyo reported a two-month high of 950 new cases on Saturday, as experts warned that the more transmissible delta variant was spreading fast. While Japan’s vaccine rollout has picked up speed in recent weeks, only about 17% of the population has been fully vaccinated.