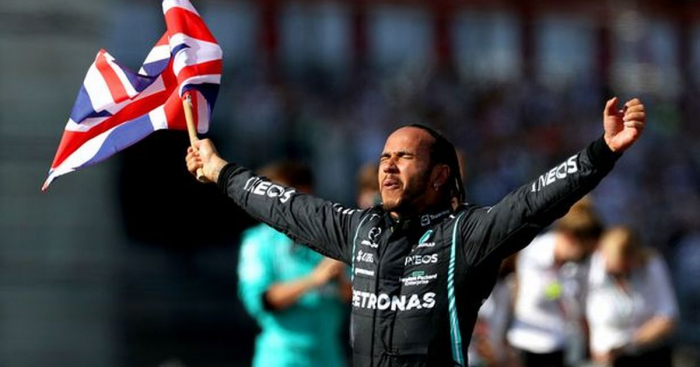 Hamilton was blamed for a collision with Verstappen's Red Bull at Copse corner on the first lap of the race, which led to the Dutchman crashing out.

Verstappen, 23, was taken to hospital for precautionary tests after the accident while Hamilton set about trying to win the race.

The Grand Prix was stopped after the incident with Leclerc in the lead from Hamilton and the Ferrari driver held that position until two laps from the end, when the Mercedes driver passed him, ironically, at the same corner at which he had crashed with Verstappen.

The controversial win, in front of a crowd of 140,0000, was Hamilton's eighth in the British Grand Prix and cuts Verstappen's championship lead to eight points after a race that will go down in the annals of F1 history.

"It's overwhelming. It's was such a physically difficult race, great weather," said Hamilton.

"It is tough but I have been giving it my all this week. Just trying to discover performance in this car with the guys. I'm just proud of everyone, even though we've had a deficit [to Red Bull]."

Of his crash with Verstappen, he added: "I just try and stay measured in my approach - particularly with Max, he's very aggressive. And then today, I was fully alongside him and he didn't give me the space, so...

"But regardless of whether I agree with the penalty, I take it on the chin and I just kept working. I wasn't going to let anything get in the way."

Verstappen later responded to Hamilton's celebrations on the podium, calling him "disrespectful" and "unsportsmanlike".

He added on Twitter: "The penalty given does not help us and doesn't do justice to the dangerous move Lewis made on track."