Emmakol Makinyan. The main reason for the chemistry between Pashinyan and Macron - ANALYSIS 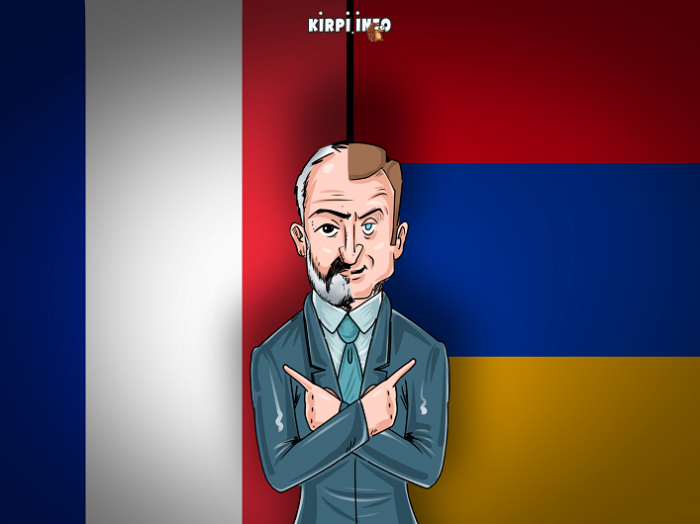 The chemistry between French President Emmanuel Macron and acting Prime Minister of Armenia Nikol Pashinyan can be explained by the need for maintaining their power.

Macron is trying to restore his declining rating at the expense of the Armenian community, while Pashinyan is trying to prove to the world community that the Karabakh conflict is not over with the support of France, and thus avoid signing a peace agreement. Because the signing of peace with Azerbaijan will mean the end of Pashinyan.

In France's last regional election, Macron's centrist Republicans secured only 7-10 % of the vote, losing to nationalist Marie Le Pen and conservative Jean Leonetti in all provinces.

The results of the regional elections suggest that Macron has little chance of winning next year's French presidential election. The decline in his rating is due to his inability to fulfil his pre-election promises and implement the planned reforms in the social field.

At the same time, President Macron is accused of failing to effectively organize the fight against the coronavirus in France. Thousands of protesters across France have rebelled against plans for COVID-19 passes to enter restaurants and mandatory vaccinations for health workers. Images on the world media showed a heavy police presence on the capital's streets. Scuffles between police and demonstrators also broke out in many places.

Instead of resolving the problems inside the country, Macron hurried to Armenia, probably hoping to win the next election only in the Armenian lobby in France. He thinks that by blindly supporting Pashinyan, he will win the sympathy of the Armenian community in his country. While repeating that the Nagorno-Karabakh conflict is not over yet and the OSCE Minsk Group is required for a settlement, Macron is fulfilling Pashinyan’s order and trying to restore Paris's lost influence in the South Caucasus.

For Pashinyan, Macron is the only foreign leader who helps create an imitation of Yerevan’s European integration. Pashinyan knows that the path to cooperation with the EU lies in a complete solution to the conflict. In other words, the EU can open its doors to Yerevan for integration after Pashinyan recognizes the territorial integrity of Azerbaijan and signs a peace treaty. This is also openly stated by EU officials. Pashinyan is unable to take such a step for fear of public condemnation in his country, but at the same time, he does not want to undermine relations with the EU. Therefore, he presents Macron to the EU as an alternative, saying “Look, France is interested in cooperating with us in energy and other spheres. Moreover, France does not require us to make peace with Azerbaijan and even calls for discussing the status of “Artsakh”.

Yerevan is demonstrating this model to the EU as an example and striving to build cooperation accordingly. Although he is well aware of this impossibility, Pashinyan is trying to gain time in this way to strengthen his power and demonstrate to the Armenian society that he “did not lose the war”.

Of course, Europe's common interests will not eventually allow any individual interests to prevail, and Macron-Pashinyan friendship, based on populism and aimed at increasing each other’s reputation, will not last long.