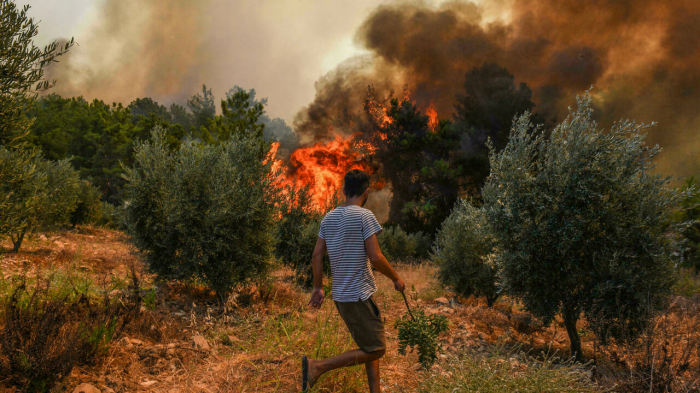 Turkish President Recep Tayyip Erdogan announced the detention of the suspected person that may be involved in forest arsons in the country.

"One person has been detained in connection with the fire in Milas. Our debt is to find those setting our forests on fire," he said at a press conference in Marmaris broadcast by NTV channel.

The authorities do not exclude the possibility of arson and sabotage on the part of the Kurdistan Workers’ Party (PKK), which is outlawed in the republic.

A wildfire broke out on July 28 not far from the resort town of Manavgat in Turkey’s southern Antalya province due to extremely hot weather in the region, according to preliminary data. Then on Thursday, the fires erupted in a number of other provinces, including the resort provinces of Aydin and Mugla. According to Turkey’s disaster and emergency management agency, the number of casualties as a result of the blazes has reached six. As of now 88 out of 98 fire areas have been extinguished.

Turkey’s leader said on July 29 that the state had mobilized all possible firefighting means. According to the presidential administration, over 1,100 units of equipment are engaged in the firefighting effort, including three Russian Be-200 amphibious aircraft.

Specialists think that high temperatures in the region and strong winds are one of the main reasons for the wildfires.