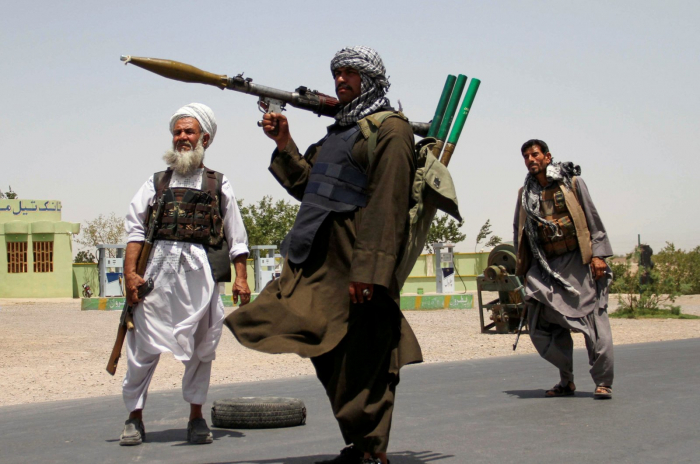 Hundreds of commandos were deployed to the western city of Herat while authorities in the southern city of Lashkar Gah called for more troops to rein in the assaults even as Afghan airstrikes left scores dead on the streets, residents said.

Fighting has surged across Afghanistan since early May when U.S.-led foreign forces began a final withdrawal that is now almost complete. After seizing large tracts of rural territory and capturing key border crossings, the Taliban have started assaulting provincial capitals.

Flights out of Kandahar, Afghanistan's second-largest city and the former stronghold of the insurgents, were suspended on Sunday after two rockets hit the runway before dawn. The Taliban claimed the attack, saying government warplanes were "bombarding" their positions from the airport.

Airport chief Massoud Pashtun said flights resumed later on Sunday after the runway was repaired. The facility is vital to maintaining the logistics and air support needed to keep the Taliban from overrunning the city, while also providing aerial cover for large tracts of southern Afghanistan. The rocket barrage came as the Taliban inched closer to overwhelming at least two other provincial capitals, including nearby Lashkar Gah in Helmand province.

"Fighting is going on inside the city and we have asked for special forces to be deployed," Ataullah Afghan, head of Helmand provincial council, told Agence France-Presse (AFP).

Afghan security forces have increasingly relied on airstrikes to push the militants back from cities even as they run the risk of hitting civilians in heavily populated areas.

"Every inch of the city has been bombed," Badshah Khan, a resident of Lashkar Gah, a city of 200,000 people, told AFP by phone, adding the two warring sides were fighting "street to street" battles. "You can see dead bodies on the streets. There are bodies of people in the main square," he said, adding the Taliban had even surrounded the city's police headquarters and governor's office. Humanitarian organization Emergency said its hospital in Lashkar Gah was 90% full after receiving dozens of casualties.

"We heard bombing from the hospital throughout the night and the morning, plus small arms fire, machine guns, snipers and artillery," said Viktor Urosevic, the medical coordinator at Emergency. Further west in Herat, fighting continued on the city's outskirts overnight with airstrikes targeting Taliban positions, following another day of dramatic clashes between the insurgents and Afghan forces bolstered by local militia fighters.

Herat provincial governor's spokesman Jailani Farhad said around 100 militant fighters had been killed in the attacks, a claim difficult to independently verify. On Sunday, the Ministry of Defense said hundreds of commandos had been sent to Herat to help beat back the insurgent assault.