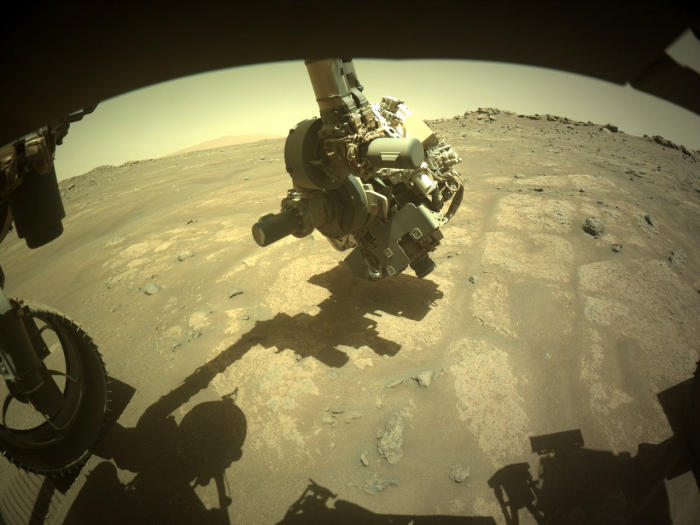 NASA recently shared a new batch of Mars photos, and among them, whimsical worm-like rocks were spotted on the Martian surface. If it seems like there's a lot of discussion surrounding Mars right now, that's because there is! There are multiple rovers/probes exploring the planet, NASA hopes to launch its first human mission in 2030, and there's a lot of hope/anticipation that it could one day be a home for future humans. There's a lot of work that needs to be done before that can happen, however. To get there, countless research is happening as we speak.

In just the past month, multiple discoveries and milestones have been accomplished on Mars. NASA's Perseverance rover was able to operate on its own for the first time, the Ingenuity helicopter crossed 1-mile of flight on the Red Planet, and the InSight probe created an interior map of Mars' many layers — a first for any planet other than Earth! There have also been hundreds of new images sent back from these robots, showcasing gorgeous images of Mars' rocky surface and rolling hills.

NASA recently published the latest batch of photos from its Curiosity rover, and among them, it captured a strange, worm-like rock formation that's typically not seen on Mars. The above photo shows the rocks from a distance, and even here, their unique appearance is easy to spot (despite the whole formation being just centimeters in total size). This formation stands out as distinctly different from the usual dust and rock debris scattering the Martian surface. Quickly glancing at the picture, it'd be easy to mistake the rocks for snakes or worms.

Looking at the rock formation in a much closer image, its fine details are on full display. It has a truly unique shape, tiny holes throughout its small body, and a very rough texture. The worm-like rock was discovered by Curiosity on Mars' Gale Crater, which is where the Mount Sharp mountain lives. NASA believes it's made up of material on the planet that can withstand the harsh erosion so many other rocks are susceptible to, which is especially impressive considering the strong dust and wind the Gale Crater area is known for.

Commenting on the discovery, NASA geologist Abigail Fraeman said it's a "particularly whimsical image of an interesting rock texture. I continue to be dazzled by the textures we're seeing, especially the prevalence of centimeter-sized bumps and lumps poking out of the bedrock." That's all this rock really boils down to, but that's also not a bad thing. Certain Mars discoveries pave the way forward for learning important data points about the planet, and then there are ones like this that are more lighthearted. Both are important in space exploration because each discovery is just that  — a discovery. Plus, it helps when they're as fun as this one.