At least 65 dead as wildfires rage across Algeria 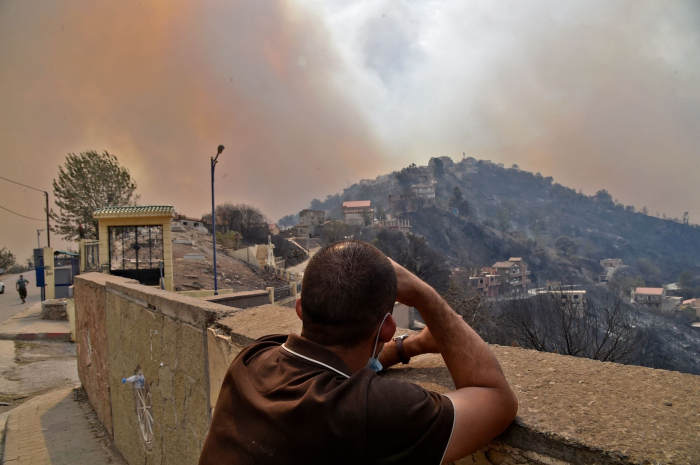 As wildfires fanned by blistering temperatures and tinder-dry conditions blaze through Algeria's Kabylie region, the death toll has risen further. At least 65 people, including 25 military officers, have died in fires that erupted east of the Algerian capital Algiers, state television reported on Wednesday.

Prime Minister Ayman Benabderrahmane had earlier revealed the death toll as 42 on Tuesday. He also told state television the government had asked for help from the international community and was in talks with partners to hire planes to extinguish fires.

Previously on the same day, Interior Minister Kamel Beldjoud said that the fires had caused the deaths of at least seven people, noting that the blazes had criminal origins.

Photographs posted on social media show huge walls of flame and billowing clouds of smoke towering over villages in the forested hills of the Kabylie region, east of the capital Algiers.

Algeria is the latest Mediterranean country to be hit by wildfires, after blazes hit Greece, Turkey and Greek Cyprus.

Meteorologists said the temperature would hit 46 degrees Celsius (115 degrees Fahrenheit) on Tuesday, and the country is also struggling with severe water shortages.

Fires were reported in multiple locations in 14 districts, 10 of them around Tizi Ouzou, one of the most populous cities in Kabylie.

Beldjoud said the fires had claimed the lives of seven people, including six in the region around Tizi Ouzou and one in Setif.

"Fifty fires starting at the same time is impossible. These fires are of criminal origin," said Beldjoud, who headed a ministerial visit to Tizi Ouzou.

Arson has been blamed for several major fires in recent years.

Last month, President Abdelmadjid Tebboune ordered a bill to stiffen punishments for starting a forest fire, with sentences of up to 30 years in prison – and possible life imprisonment, if the fire results in death.

In July, three people were arrested on suspicion of starting fires that devastated 15 square kilometers (6 square miles) of forest in the Aures mountains.

In 2020, nearly 440 square kilometers (170 square miles) of forest were destroyed by fire, and several people were arrested on suspicion of arson.

On Monday, the U.N. released a major report showing how the threat from global warming is even more acute than previously thought.

It highlighted how scientists are quantifying the extent to which human-induced warming increases the intensity and/or likelihood of a specific extreme weather event, such as a heat wave or a wildfire.