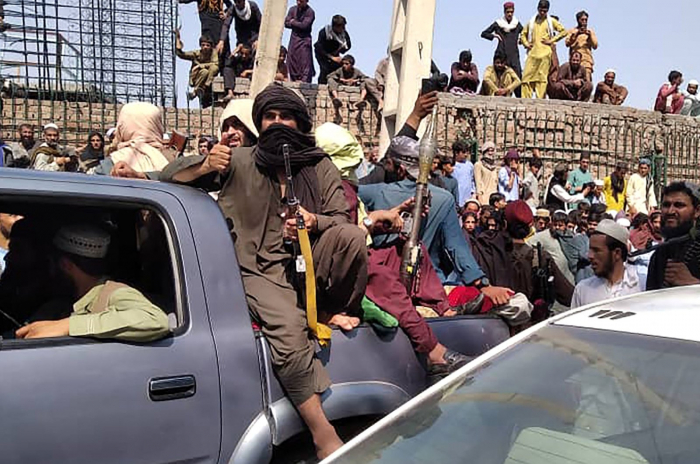 The country's Interior Minister Abdul Sattar Mirzakwal said there would be a "peaceful transfer of power" to a transitional government, after the Taliban ordered its fighters to hold back from entering Kabul.

"The Afghan people should not worry... There will be no attack on the city and there will be a peaceful transfer of power to the transitional government," he said in a recorded speech, according to Agence France-Presse (AFP).

Earlier Taliban fighters entered the outskirts of the Afghan capital and said they were awaiting a "peaceful transfer” of the city after promising not to take it by force, but the uncertainty panicked workers who fled government offices as helicopters landed at the U.S. Embassy.

Three Afghan officials told The Associated Press (AP) that the Taliban were in the districts of Kalakan, Qarabagh and Paghman in the capital. In a nationwide offensive that has taken just over a week, the Taliban has defeated, co-opted or sent Afghan security forces fleeing from wide swaths of the country, even though they had some air support from the U.S. military.

The lightning speed of the push has shocked many and raised questions about why Afghan forces crumbled despite years of U.S. training and billions of dollars spent. Just days ago, an American military assessment estimated it would be a month before the capital would come under insurgent pressure.

Taliban spokesperson Suhail Shaheen told Qatar’s Al-Jazeera English satellite news channel that the insurgents are "awaiting a peaceful transfer of Kabul city.” He declined to offer specifics on any possible negotiations between his forces and the government.

"No one’s life, property and dignity will be harmed and the lives of the citizens of Kabul will not be at risk,” the insurgents said in an earlier statement. Taliban negotiators headed to the presidential palace Sunday to discuss the transfer, said an Afghan official who spoke on condition of anonymity for fear of reprisals.