Women to have rights within Islamic law, Taliban say 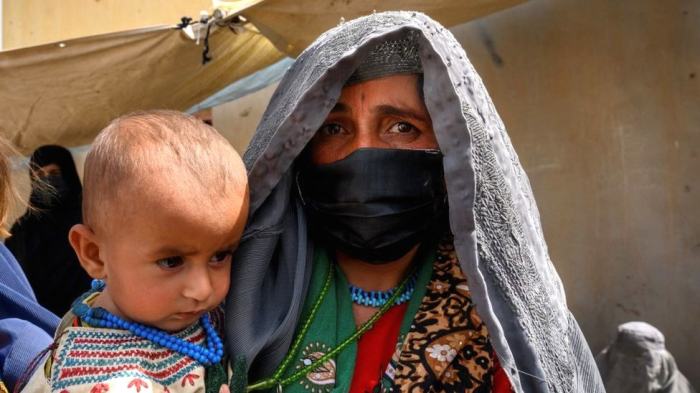 The rights of women in Afghanistan will be respected "within the framework of Islamic law", the Taliban say.

In the group's first news conference since taking control of the country on Sunday, a spokesman said women would be free to work but gave little detail about other rules and restrictions.

Zabihullah Mujahid repeated that all Afghans must live "within the framework of Islam".

Rights groups fear women's freedoms could be eroded under the Taliban.

The militant group introduced or supported punishments in line with their strict interpretation of Islam's legal system, Sharia law, when they controlled Afghanistan between 1996 and 2001.

Women had to wear the all-covering burka, and the Taliban also disapproved of girls aged 10 and over going to school.

In the news briefing on Tuesday, Mr Mujahid fielded several questions from the international media about what women's rights could look like under a Taliban government.

But he did not expand when asked about dress codes and what roles women would be able to have within the country's workforce.

Earlier on Tuesday, the Taliban declared a general amnesty across Afghanistan and said it wanted women to join its government.

Analysts say the group is running a sophisticated PR campaign in an effort to win the hearts and minds of both Afghans and the international community.

The message of the new rulers has been received with mixed feelings inside Afghanistan.

"I don't believe what they're saying," a woman in Kabul who watched Mujahid speak on television told the BBC.

"It's a ruse and we're being lured outside to be punished. I refuse to study or work under their laws," said another.

Yet some others saw some early promise.

"If we're able to work and get educated, that's the definition of freedom for me, that's my red line. That red line is not crossed by the Taliban yet," one Afghan woman said.