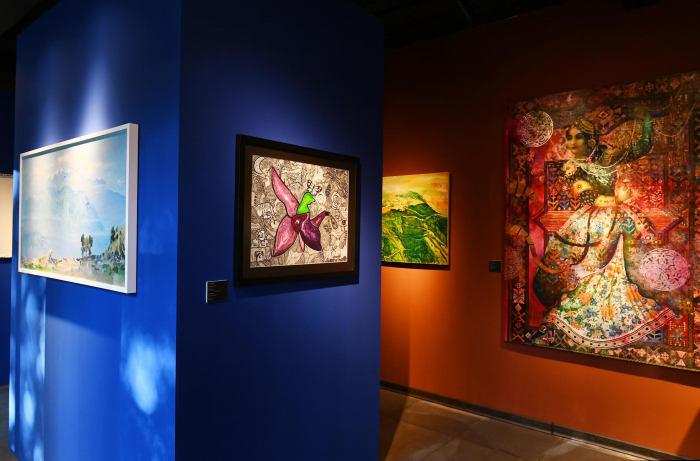 Within the framework of the Vagif Poetry Days, an exhibition entitled ‘Memory. Photographic history’ was opened at the Center of Creativity in the Azerbaijani city of Shusha on August 30, AzVision.az reports.

Moreover, an exhibition entitled ‘Karabakh - the pearl of Azerbaijani culture’ and on the Gallery of carpet weaving - an exhibition ‘Back in the native land. Pearls of Karabakh art’ were opened in Shusha.

Valuable works of art presented at all three exhibitions not only united the past and the present, but also demonstrated the unique features of the creativity of the Azerbaijani people.

Every photo, every painting, every carpet sample presented here is also a kind of message to the future. These works, along with the fact that they are pearls of art that have received a chance to become a part of our history, also demonstrate the abilities and talent of the Azerbaijani people. 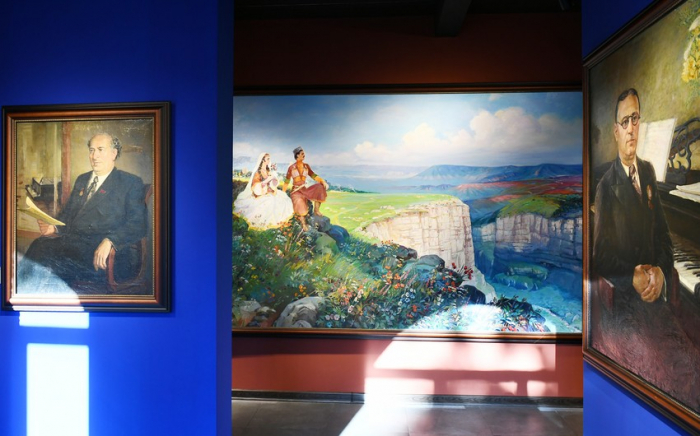 The first exhibition visited by the guests was "Memory. Photographic History". The Creativity Center, where the Heydar Aliyev Foundation organized an exhibition, was created in a building that was once the Aga Gahraman Mirsiyab oglu Caravanserai and is one of the architectural monuments of national importance. The photo exhibition tells about the ancient history, rich culture, picturesque nature, traditions of Azerbaijan. Armenia committed vandalism against our cultural heritage, samples of history and architecture, in the territories occupied at one time, the enemy destroyed historical and cultural objects, religious temples, wiped out a number of districts and cities from the face of the earth.

Visitors were informed that the photo exhibition presented exhibits reflecting the natural landscapes of the Zangilan region, famous for its plane trees, a historical mosque, a mausoleum, springs and monuments of the city of Shusha - a temple of Caucasian art, a historical bridge and places of worship in Gubadli region, landscapes of Kelbajar, mineral Istisu spring, material and cultural samples of Khojavend region, Khudaferin bridge and historical monuments of Jebrail region, as well as other landscapes of Karabakh.

The video presented in the exhibition hall also allowed visitors to familiarize themselves with the situation in our districts and cities before and after the occupation. In addition, the exhibition displayed photographs reflecting the crimes committed by Armenia against the civilian population during the Patriotic War. 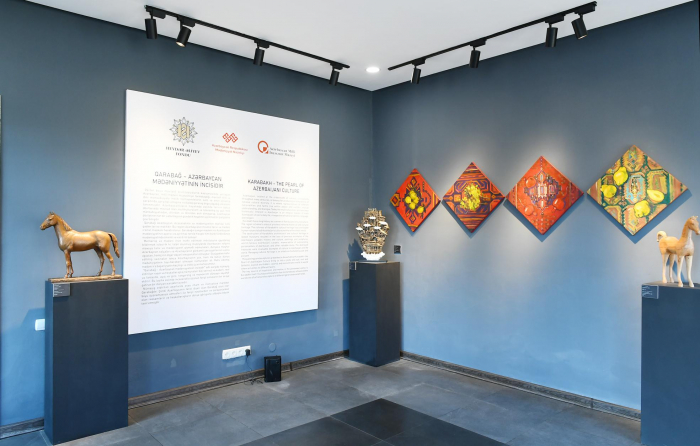 "Karabakh is the pearl of Azerbaijani culture"

The paintings and sculptures presented at the exhibition take visitors on a journey into a joyful and sad, real and fantastic, open and secret, colorful and monochrome world. The main source of inspiration in the works presented here is Karabakh. Over the years, Karabakh - the historical land of Azerbaijan with its unique atmosphere - has had a huge impact on the worldview of artists and sculptors of various generations and trends.

The exhibition, organized by the Heydar Aliyev Foundation, presents the works of Boyukaga Mirzazade, Togrul Narimanbekov, Maral Rahmanzade, Nadir Abdurrakhmanov, Mikail Abdullayev, Ujal Hagverdiev, Museib Amirov and other prominent Azerbaijani artists. A wide space is given to such topics as landscapes, writers, carpets, horses, mugam of Karabakh, victory in the Patriotic War

Among those who looked at these pearls of art was the rector of the Baku Music Academy named after Uzeyir Hajibeyli, People's Artist of Azerbaijan Farhad Badalbeyli. Stressing that these unique pearls of art are an integral part of our history, noting the great historical significance of such events organized in Shusha in a short time, he said that he was proud to have seen these days: "I am happy to participate in this event today. I am glad that on May 13th I took part in the "Kharybulbul" festival. Shusha is a unique city for any Azerbaijani. All our cities are dear to us, but Shusha is itself a unique and peculiar city. And it is a great honor to take part in today's wonderful event together with other representatives of the intelligentsia" 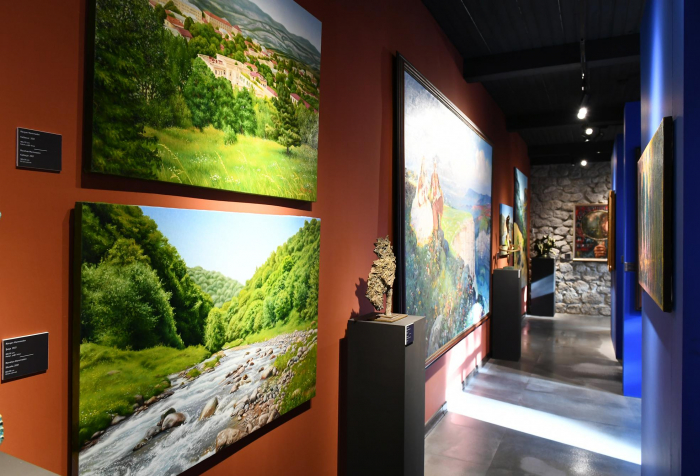 "Back in my native land. Pearls of Karabakh art"

And in the gallery of carpet weaving in Shusha, restored and renovated by the Heydar Aliyev Foundation, the exhibition "Back in the native land. Pearls of Karabakh art" was held. The exhibition, presented by the Azerbaijan National Carpet Museum with the organizational support of the Heydar Aliyev Foundation, displays pile and lint-free carpets, carpets, national embroidery and costumes, art samples of metalwork. It also displays samples of carpets from the collection of the National Museum of the History of Azerbaijan.

It should be noted that most of these exhibits, re-exhibited in their native land, were transported to Baku from the Shusha branch of the Azerbaijan National Carpet Museum during the First Karabakh War.

At the exhibition, you can see samples of Karabakh carpets related to different regions, which have been highly valued for centuries and are among the unique exhibits of foreign museums and personal collections. These include carpets with a printed pattern, reflecting the lifestyle of the population engaged in animal husbandry, as well as carpets woven in professional workshops with floral patterns and theme carpets covering the urban culture - "Varni", "Zili", "Chelebi", "Lempe", "Malybeyli", "Gasimushagi", "Ayan Mejlisi" and others.

The chairman of the Union of Artists of Azerbaijan, People's Artist Farhad Khalilov, who familiarized himself with the exhibits with great interest, spoke about the uniqueness of these works of art and that they are outstanding works of art belonging to our people: "We are glad to see Shusha carpets here again. These carpets are truly a miracle. Today we are incredibly happy. We see how much work has been done. We really live a new life, the victory in the Patriotic War and the restoration work carried out today take us as a nation to a new level. I once again express my gratitude to President Ilham Aliyev and First Lady Mehriban Aliyeva for giving us today".

Thus, the exhibition "Back in the native land. Pearls of Karabakh art" gives an opportunity to feel the spirit of the ancient land, the life and life of people who lived and worked here for centuries, aesthetic taste, the artistic worldview of masters, to make a trip to those historical periods. 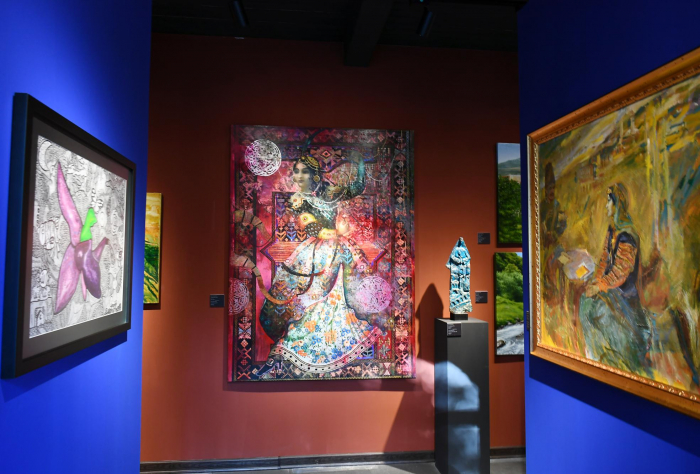