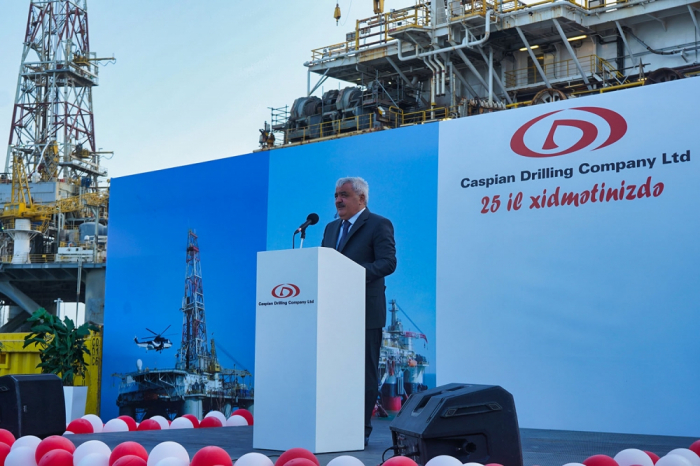 Caspian Drilling Company (CDC), founded as the first joint venture after signing oil and gas production sharing agreements in Azerbaijan, has solemnly celebrated its 25th anniversary. Since the company’s anniversary fell on Sunday, September 5, 2021, the event was arranged on September 6, 2021, at the CDC’s marine supply and logistics base.

The event was attended by senior officials of SOCAR, BP, Eqiunor, and TOTAL.

Opening the event, CDC Director General Farid Akhundov informed about the company's development since its establishment.

SOCAR President Rovnag Abdullayev and First Vice President Khoshbakht Yusifzade congratulated the CDC staff and stressed the company's important position in the development of Azerbaijan's oil and gas sector. It was emphasized that CDC with Dada Gorgud, Istiglal, and Heydar Aliyev semi-submersible drilling rigs in its fleet had so far performed exploration and production drilling as part of all offshore projects implemented under production-sharing agreements in the Azerbaijani sector of the Caspian Sea, except for the Umid field, and as a result of these exploration and drilling operations, the Azeri-Chirag-Guneshli and Shah Deniz fields were discovered. It was also noted that CDC led the construction of the 6th generation semi-submersible drilling rig named after the great leader Heydar Aliyev, and under the company's leadership, the Heydar Aliyev semi-submersible rig drilled a 7,411 deep well (total measured depth), having thereby set a record for drilling the deepest offshore well in the Caspian Sea. The company's list of advances also comprises drilling operations abroad. Thus, CDC drilled two exploration wells for the State of Israel in the Mediterranean, as well as reactivated and performed the first drilling with the 6th generation Fatih drilling ship in the brotherly Republic of Turkey. Currently, CDC has completed the revamp of the Satti jack-up drilling rig, imported from Kazakhstan, and is performing operations with it in the shallow waters of the Absheron Peninsula, jointly exploited by SOCAR and BP.

At the event, by the appropriate order of SOCAR President Rovnag Abdullayev, a group of CDC employees was awarded merit awards.