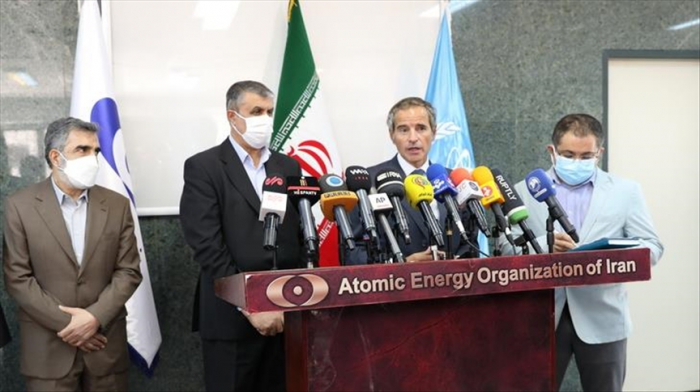 The announcement came during the International Atomic Energy Agency (IAEA) chief Rafael Grossi's visit to Tehran, ahead of the IAEA Board of Governors (BoG) meeting in Vienna next week, which will be followed by the annual general conference.

The two sides have also agreed to continue their 'technical talks' in Vienna as well as in Tehran, following discussions between Grossi and Iran's newly appointed nuclear agency head Mohammad Eslami.

Iran confirmed its participation in the upcoming conference in Vienna, and said Grossi will travel to Tehran again "in near future" for "high level consultations" over "current issues of mutual interest".

On the issue of IAEA inspectors' access to Iranian nuclear sites, the agency has been "permitted to service the identified equipment and replace their storage media", which will be kept in Iran, and "the way and timing" agreed by the two sides.

The move has virtually eliminated the possibility of an anti-Iran resolution at the IAEA BoG meeting.

Grossi's visit to Tehran comes amidst heightened tensions between Iran and the West, with talks to revive the 2015 nuclear deal put on the backburner.

Earlier this week, the UN atomic watchdog said Iran has "continued to increase" its stockpile of enriched uranium that it warned could be used to make nuclear weapons.

In its quarterly report, the agency also said its verification and monitoring activities have been “seriously undermined” due to Iran’s refusal to let inspectors access the sites.

In response, Iran’s envoy to the IAEA, Kazem Gharibabadi, said "no one can tell" Tehran to stop its nuclear activities as long as the US sanctions are in place.