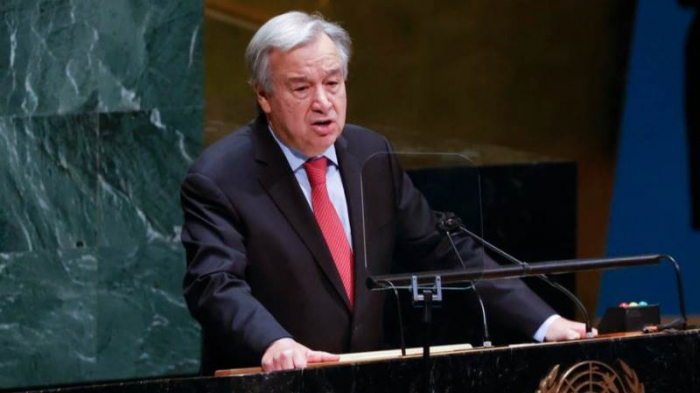 "We have reached a tipping point on the need for climate action," he said in a video message for the launch of "United in Science 2021" climate report.

"The disruption to our climate and our planet is already worse than we thought, and it is moving faster than predicted. Yet, we are far from meeting the goals of the five-year-old Paris Agreement. This report shows just how far off-course we are," he said.

"This report -- by the United Nations and global scientific partner organizations -- is clear. We really are out of time. We must act now to prevent further irreversible damage."

By then all countries need to commit to achieve net-zero emissions by the middle of this century and to present clear, credible long-term strategies to get there. All countries need to present more ambitious and achievable Nationally Determined Contributions that will together cut global greenhouse gas emissions by 45 percent by 2030, compared to 2010 levels, he said. "Nothing less will do."

This report makes clear that the climate has already changed and that climate-related risks are increasing rapidly. It is urgent to step up efforts to protect people and their livelihoods, particularly in the most vulnerable countries that have been hit simultaneously by climate disruption, COVID-19 and crushing levels of debt, he said.

Guterres stressed the need to urgently secure a breakthrough on adaptation and resilience so that vulnerable communities can manage these growing risks. That means adequate finance, beginning with developed countries delivering on their pledge to mobilize 100 billion U.S. dollars annually for mitigation and adaptation in the developing world, he said.

"I expect all these issues to be addressed and resolved at COP26. Our future is at stake."

Guterres noted that the five-year period since the Paris Agreement on climate change is among the hottest on record. Ice caps and glaciers continue to melt, sea-level rise is accelerating, the ocean is dying and biodiversity is collapsing.

The results are plain to see, affecting health, lives and livelihoods everywhere, he said. "We now have five times the number of recorded weather disasters than we had in 1970 and they are seven times more costly. Even the most developed countries have become vulnerable."

Hurricane Ida recently cut power to over a million people in New Orleans, and New York City was paralyzed by record-breaking rain brought by Ida that killed at least 50 people in the region. Unprecedented floods devastated parts of western Europe and an exceptional and dangerous heatwave killed hundreds in the northwest United States and western Canada. These events would have been impossible without human-caused climate change, he said.

Costly fires, floods and extreme weather events are increasing everywhere. These changes are just the beginning of worse to come, he warned.

"Unless there are immediate, rapid and large-scale reductions in greenhouse gas emissions, we will be unable to limit global heating to 1.5 degrees Celsius. The consequences will be catastrophic," he said.