How smog can be turned into floor tiles - iWONDER 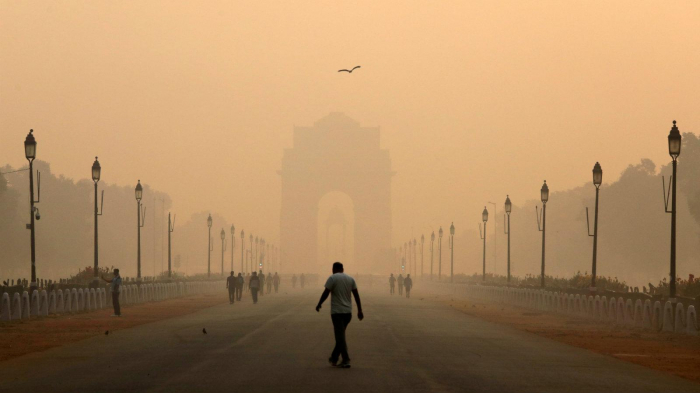 Smog is a leading cause of ill health around the world, but one Indian inventor is hoping to make it easier to breathe by scrubbing soot from the air and recycling it.

As a 10-year-old living in Mumbai, Angad Daryani often struggled to breathe during football matches because of the thick smog surrounding the Indian megacity. The heavily polluted air seemed to exacerbate his asthma.

"When I used to play outside in Mumbai, I'd always be coughing because of the pollution," says Daryani, who is now 23 years old. "Growing up I had asthma. It slowed down my ability to sprint on the football field."

India has the world's worst air pollution. Home to 22 of the world's 30 most polluted cities, India's toxic air kills more than one million people each year.

The smoggy air cloaking India's cities often contains dangerously high levels of fine particulate matter, known as PM2.5. These pollutants have been linked to lung and heart disease, and are known to impair cognitive functions and the immune system. PM2.5 air pollution caused around 54,000 premature deaths in New Delhi in 2020, according to analysis by Greenpeace Southeast Asia.

"In India, you notice a big difference in energy levels compared to in US cities," says Daryani. "You get tired as soon as you wake up because of the pollution."

Fired by his own experience of the effects of air pollution on his health, Daryani is one of a growing number of entrepreneurs hoping to clean up India's skies. His solution is to capture the soot and other polluting particles in containers so it can be turned into something useful like building tiles.

The coronavirus pandemic has also highlighted just how urgent tackling air pollution by treating it as a public health risk, as well as a climate threat, says Daryani.

"Air pollution kills seven million people worldwide every year, but we don't take it as seriously as Covid-19," he says.

New Delhi's chief minister blamed air pollution for the coronavirus spike at the time. Several studies now suggest that persistently high levels of air pollution may have significantly increased deaths from Covid-19. A PM2.5 increase of just 1 microgram per cubic metre corresponded to a 15% increase in Covid-19 deaths in US cities, according to one Harvard University study.

“In India, you get tired as soon as you wake up because of the pollution – Angad Daryani
"For every small increment in air pollution, there's a substantial increase in death," says Aaron Bernstein, the director of the Center for Climate, Health, and Global Environment at Harvard University.

For Daryani, there is no time to spare – India must urgently reduce pollution to protect people's health.

"Converting all vehicles to electric will take at least 30 years. During this time, cities will choke up with air pollution," he says. "We have to purify air in a hyperlocal manner."

His solution to the problem is a beguilingly simple one – develop a low-cost system that can capture the pollution so it can be turned into something else.

While studying engineering at the Georgia Institute of Technology in the US, Daryani designed an outdoor purification system that removes particulate matter and other pollutants from the air. The device sucks in the polluting particles and collects them in a container, leaving clean air in its place.

After designing his first device, Daryani launched the start-up Praan in 2017 with the aim of building an affordable and versatile outdoor air purifier.

Praan's goal is to design the world's first filterless purifier that can clean as much air as possible, while fitting onto infrastructure.

"How is this scaleable? It's not the solution," says Daryani. Praan's devices are 176cm tall and can easily be mounted onto street lamps, apartment blocks and schools. Two devices cost less than the latest iPhone Pro, on sale in India for $1,830 (135,000 Indian rupees/£1,329), says Daryani.

Using filters, like in household air purifiers, isn't an option as they would need replacing every day in a polluted city, according to Daryani. Hotels using indoor purifiers spend around $100,000 (£72,600) annually on filters, he says. "To scale this technology in cities across Asia, I realised that the device had to be filterless."

Praan recently completed its first investment round, raising $1.5m (£1.1m) from US and Indian investors. Daryani plans to use this funding to run a pilot programme, deploying devices at schools, hotels and industrial projects across India this autumn. But he also hopes to make the technology available outside India in the next few years and Praan has already received interest from South Korea and Mexico.

But ensuring that the device is affordable is a priority. "Many of the world's most polluted countries are among the poorest," says Daryani."Poor people work in factories, build the streets and infrastructure, and take public transport to get to work. They live and work in the most polluted environments."

Low-income households in India are at higher risk of dying from air pollution, despite not producing it themselves, according to a recent study.

"Low-income groups, despite not producing a lot of air pollution indirectly because they don't consume much, are facing a disproportionate impact of air pollution from other sources," says the lead author of the study Narasimha Rao, associate professor of energy systems at Yale School of Environment.

"Children in slums, families forced to live close to industrial areas, or highways will always need additional innovations to reduce the loss in health and productivity," says Shruti Rajagopalan, an economist who leads the Emergent Ventures programme at the Mercatus Center.

Emergent Ventures provided Praan with two back-to-back grants early on in their development process. "This is an important breakthrough even in areas where pollution is better managed," says Rajagopalan.

Daryani has also started designing a new device that can capture carbon dioxide in the hope it can start to scrub the greenhouse gas from the air. He hopes to have a device that can remove one tonne of CO2 from the air installed in India by the end of the year and could be placed in parks or in industrial areas. He has already received interest from customers in the US and Europe, which have both pledged to reduce their emissions to net zero by 2050.

"Future generations need to feel like they have a future," he says.