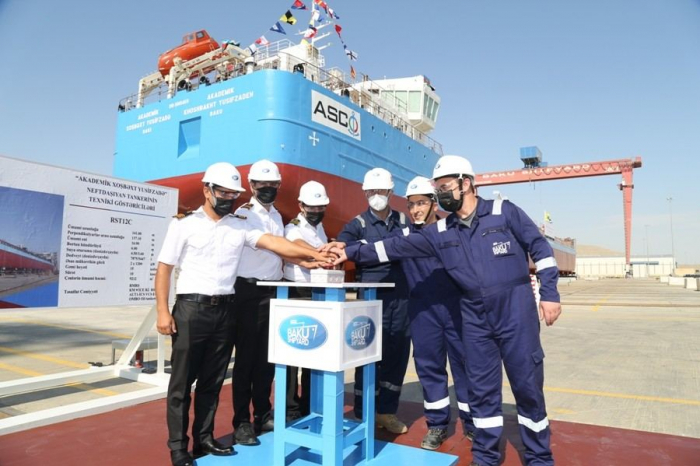 According to the company, the tanker was built by its order at the Baku Shipyard.

Speaking at the tanker launching ceremony, ASCO Chairman Rauf Valiyev said that the Academician Khoshbakht Yusifzade tanker is the third tanker built at the Baku Shipyard by the company's order.

Previously, this shipyard built and commissioned Lachin and Kalbajar tankers.

"Over the past eight years, our fleet has been replenished with 18 new ships. Orders have also been placed for the construction of another 10 similar ships at the Baku Shipyard," Valiyev noted.

The launching ceremony participants also noted that the concept of the new oil tanker was developed jointly with the Ukrainian Odessa Marine Engineering Bureau and ASCO specialists.

The commissioned tanker is 141 meters long, 16.9 meters wide and six meters high. The crew of the vessel consists of 15 people, and the speed is 10 knots per hour.

The vessel has six tanks with a total capacity of 9,212 cubic meters for the transportation of crude oil and oil products. The vessel is equipped with two Wartsila engines, each with a capacity of 1,200 kW.

ASCO Chairman Rauf Valiyev, General Director of the shipyard Imanverdi Hasanov, and employees of both enterprises took part in the launching ceremony.

Khoshbakht Yusifzadeh is Doctor of Science in Geology and Mineralogy, First Vice-President of the State Oil Company of Azerbaijan for Geology, Geophysics and Field Development. Yusifzadeh is known for having discovered numerous oil and gas fields such as Bahar, Gunashli, Azeri, Chirag, Kapaz, and others. He is also a member of the Azerbaijan National Academy of Sciences.