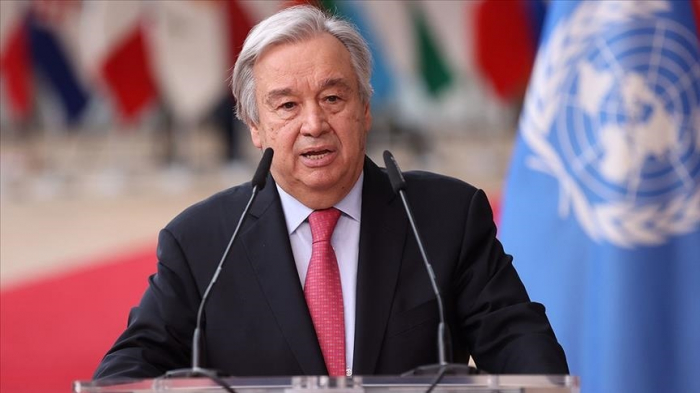 "By 2030, solar and wind capacity should quadruple to respectively 630 and 390 gigawatts added annual capacity," the UN chief told the UN High-level Dialogue on Energy, which saw nations commit to accelerating previous pledges to advance clean energy for all by 2030 and achieve net-zero emissions by 2050.

Member states will reinforce efforts to meet the UN Sustainable Development Goals and the targets set out by the global 2015 Paris Agreement on climate-change mitigation.

"We must intensify our efforts to improve energy efficiency. There must be no new coal plants built after 2021," Guterres said.

The Organization for Economic Cooperation and Development countries must commit to phasing out existing coal capacity by 2030, with all other countries following suit by 2040.

On universal energy access, the secretary-general said that to reach the goal by 2030 and maintain a net-zero trajectory by mid-century, "we must mobilize predictable finance at scale and promote technology transfer to the developing world."

"We need to triple investment in renewable energy and energy efficiency to 5 trillion U.S. dollars a year. And access to finance by developing countries must be simplified, facilitated and expedited," he said.

"We need to redirect fossil fuel subsidies to renewables and put a price on carbon," said the secretary-general. "And all development banks -- multilateral, regional and national -- need to help countries as they transition their economies. Public and private finance must be urgently mobilized and deployed at scale to accelerate the global phase out of coal power generation."

"Investing in renewable energy -- instead of spending billions on propping up fossil fuels -- can create tens of millions of good jobs and empower the most vulnerable," Guterres said.

"Every country, city, financial institution, company and civil society organization has a role to play in building a sustainable and equitable energy future," he said.

"We cannot wait another 40 years. The age of renewable, affordable energy access for all must start today," said the secretary-general.

"Without deep and rapid decarbonization of our energy systems over the next 10 years, we will never reach the Paris Agreement goal of limiting temperature rise to 1.5 degrees Celsius," he said.

Friday's meeting on energy was the first held under the auspices of the General Assembly since 1981. It also came weeks ahead of the UN Climate Change Conference (COP26) later this year, which hopes to see nations commit to ambitious 2030 emissions reductions targets.