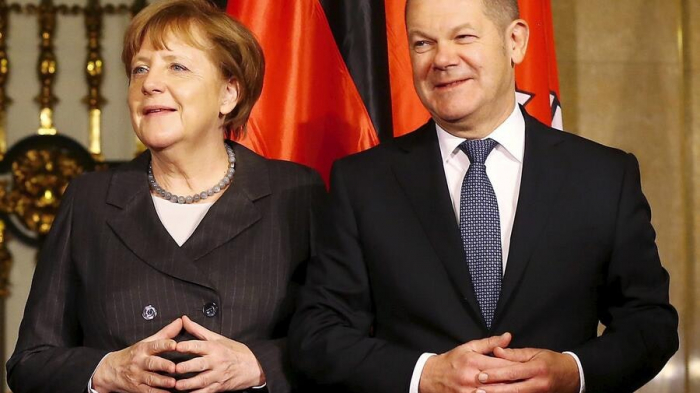 by Melvyn B. Krauss

Strong performances by the Greens and the Social Democrats in Germany's federal election have made it likely that outgoing Chancellor Angela Merkel's Christian Democrats will be consigned to the opposition. The hope now is that German economic policy will start to look to the future, rather than merely the present.

The Greens’ strong performance in Germany’s federal election – though not as strong as the party hoped just a few short weeks ago – offers hope that the country will now finally start moving in a more promising direction. That may mean moving away from outgoing Chancellor Angela Merkel’s authoritarian-friendly positions, not least her support for the Nord Stream 2 gas pipeline between Germany and Russia, and her championing of an EU investment agreement with China (which has since been blocked by the European Parliament).

Unlike Merkel’s Christian Democratic Union (CDU) and the Social Democratic Party (SPD) – both of which have exhibited a pro-Russian bias ever since Gerhard Schröder’s chancellorship (1998-2005) – the Greens favor tougher policies toward both Russia and China. Moreover, they are now in a position to keep the SPD’s past bias toward Russia in check, since they could join its chancellor candidate, Olaf Scholz, in a new governing coalition that would consign the CDU to the opposition.

During the final television debate of the campaign, Scholz and Annalena Baerbock of the Greens came out in favor of precisely this arrangement. Although forming a new government could be a slow process, and numerous combinations and permutations are possible, the Greens are poised to play a key role in almost all of them. They are the common denominator, and this fact will not have been lost on Russian President Vladimir Putin, whom many Germans believe was active behind the scenes in trying to minimize the Greens’ electoral success.

The problem for the CDU is that even Merkel’s pro-export, pro-job policies have acquired politically unsavoury attributes in recent years. To be sure, in 2020, German trade with China totaled €212.9 billion ($249 billion), compared to €171.5 billion with the United States, €147.3 billion with France, €114.4 billion with Italy, and €101.6 billion with the United Kingdom. Because so much German employment and income depends on trade with China, German leaders have often overlooked that country’s human-rights abuses and challenges to the open rules-based global order. As former German Vice-Chancellor and SPD leader Sigmar Gabriel put it in a recent interview, “Germany has walked a tightrope between condemning Chinese human-rights violations and ensuring access to Chinese markets for German companies.”

Still, I am sure that many Germans are bothered that their exports have come at the expense of the victims of China’s human-rights abuses. Still worse, Germany’s excessive dependence on Chinese trade has prevented the European Union from establishing a united front against China’s authoritarianism. How can Europe be tough toward China when its largest economy is so soft?

Merkel has been out of step with her EU partners on autocrats. If the Greens have a greater influence on German policy, there could be more EU solidarity when it comes to dealing with China and Russia. There would also be more transatlantic solidarity, in line with US President Joe Biden’s United Nations pledge to move from “relentless war” to “relentless diplomacy” with China and Russia.

In any case, what the Greens want most for Germany is a modern economy, not a backwards-looking mercantilist one. Their catchy campaign slogan, “Goodbye status quo, hello future,” perfectly captures what sets them apart from both the CDU and the SDP – yesterday’s two main parties.

The Green slogan strongly suggests a new pro-European strategy for German growth. Among other things, this means a redeployment of Germany’s productive resources out of exports (many of which are polluting machines like Mercedes and BMWs), and into renewable energy, high-tech, digital, and other sectors.

Most critics agree that the biggest shortcoming of the Merkel era has been her failure to nurture the industries of the future. “Despite the growth and increase in employment,” notes Allianz senior economist Katharina Utermöhl, “there has been little modernization.” Under Merkel, low rates of public investment have left the country ill-prepared. Economic policy has been to live for today and forget about tomorrow. While Germany has achieved a prosperous economy with many jobs, especially for women, it is an old-fashioned economy that will inevitably stagnate unless policymakers change course.

Merkel has left a big hole for the Greens to fill, and that is what they now intend to do. One promising option is to introduce a tax on exports, with the proceeds going to fund the industries of the future. This would kill two birds with one stone, both rolling back Merkel’s mercantilism and investing in the sectors needed to maintain Germany’s global competitiveness.

True, the Greens are not actively advocating an export tax. During the election campaign, they argued for tax increases on the rich, regulatory action to cut greenhouse-gas emissions, reform of Germany’s debt rules, and sterner policies toward China and Russia. But if the idea is to jettison the status quo and pursue economic modernization, an export tax would establish the party’s credibility and garner substantial media attention. What better way to hasten the demise of Merkel’s mercantilist economic model?

Germany’s status quo has not yet been vanquished. But the Greens’ strong showing in this month’s election should give it a much shorter lifespan.

Melvyn B. Krauss is Professor Emeritus of Economics at New York University.